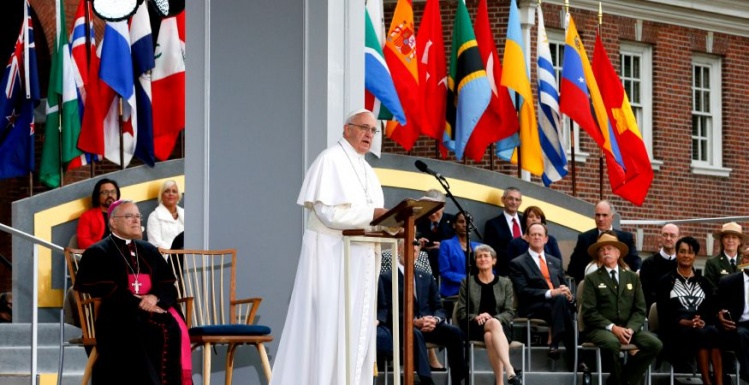 PHILADELPHIA—When Pope Francis made a surprise visit to the Little Sisters of the Poor on Wednesday, it was widely viewed as a sign that when it came to their (and their bishops’) opposition to the Obama administration’s contraception mandate the pontiff had their back. Sure, there was no formal address. It didn’t appear on the official schedule. But the message was clear: the pope stands with the Little Sisters. “By embracing this order of nuns,” according to Catholic League President William Donohue, “Pope Francis laid down an unmistakable marker: He rejects efforts by the Obama administration to force Catholic nonprofit organizations to pay for, or even sanction, abortion-inducing drugs in their health care plans.”

This afternoon, Francis had an opportunity to make that marker even less mistakable—an address on religious freedom at Independence Hall. But rather than highlight the contraception mandate, or really any specific threat to religious freedom, Francis offered a surprise stem-winder. On the page, the address looked like the opposite of his speeches to the UN and Congress: a cloud of abstractions floating high above the ground. But on several occasions, Francis departed from the prepared text—perhaps for the first time during his time in the United States—veering from philosophical discourses about the importance of historical memory to a riff on the merits of the polyhedron over the sphere as an illustration of the right kind of globalization. Really.

Yes, Francis spoke about the importance of religious liberty, and the important role religious believers have in reminding Americans of their culture’s history and promise. In stark contrast to his speeches to the U.S. Congress and the United Nations, Francis’s address on religious freedom avoided particular questions of policy or conflict. And yes, Francis did amplify a critique put forward by many critics of the contraception mandate—namely that religious liberty is about much more than freedom of worship. But that was as close as the pope got to repeating the arguments of the Little Sisters’ supporters.

But he seemed most energized when speaking directly to the people in front of them, many of them Latino immigrants. “I take this opportunity to thank all those, of whatever religion, who have sought to serve the God of peace by building cities of brotherly love, by caring for our neighbors in need, by defending the dignity of God’s gift of life in all its stages, by defending the cause of the poor and the immigrant,” Francis said. Too often, he continued, the marginalized struggle to be heard—but religious believers “remind American democracy of the ideals for which it was founded, and that society is weakened whenever and wherever injustice prevails.”

Departing from the prepared text, Francis said that a rich interreligious dialogue, in which men and woman of different faiths can disagree peacefully, is one of the fruits of religious freedom. “Our religious traditions remind us that, as human beings, we are called to acknowledge an Other, who reveals our relational identity in the face of every effort to impose ‘a uniformity to which the egotism of the powerful, the conformism of the weak, or the ideology of the utopian would seek to impose on us,’” Francis said, citing the late Jesuit scholar Michel de Certeau. Religion is not a subculture, he continued, again going off script—but an integral part of every culture.

Near the end of his speech, Francis looked up from his text, and delivered an unplanned reflection on the global economy. “Globalization is not bad in and of itself,” the pope said. If it respects the “specificity” of each person, each person’s “richness,” then it can foster growth and enable peace. But when it tries to level distinctiveness, it must be resisted. “Here,” Francis said, “I like to use a bit of geometry.” At which point he explained that good globalization looks like a polyhedron, and bad globalization looks spherical. (Is time a flat circle?) I won’t try to explain that, because geometry is my kryptonite. But here’s one explanation.

Francis concluded by returning to a key theme of his visit: immigrants not only receive gifts from their chosen country—they offer them as well.

I ask you not to forget that, like those who came here before you, you bring many gifts to your new nation. You should never be ashamed of your traditions. Do not forget the lessons you learned from your elders, which are something you can bring to enrich the life of this American land. I repeat, do not be ashamed of what is part of you, your life blood. You are also called to be responsible citizens, and to contribute fruitfully to the life of the communities in which you live. I think in particular of the vibrant faith which so many of you possess, the deep sense of family life and all those other values which you have inherited. By contributing your gifts, you will not only find your place here, you will help to renew society from within.

Ad libbing again, Francis brought the crowd back to the advertised purpose of the address, urging them not to forget that God gave them inalienable rights, that the government exists to protect them, especially the freedom of religion. What that has to do with the polyhedron or the sphere—or the contraception mandate—I wish I could say. But I suspect it was more than a tangent.