Pope Francis to Bishops: Celebrate the Family, Don't Complain about It 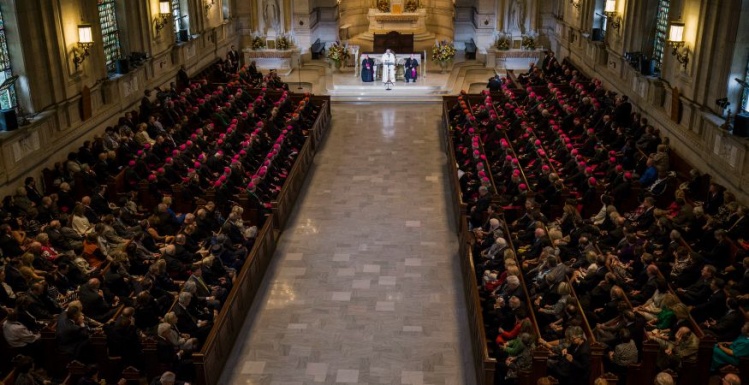 PHILADELPHIA—In a thirty-minute address this morning, Pope Francis told bishops that the family is not primarily a “cause for concern,” but rather “joyous confirmation” of God’s favor. The major pastoral challenge of our “changing times,” Francis continued, “is to move decisively towards recognizing this gift.” Whatever the obstacles facing families, facing the church, an attitude of “gratitude” for families must “prevail over concerns and complaints.” The audience included several dozen U.S. bishops, along with cardinals from around the world.

Adopting such an attitude does not mean ignoring the “unprecedented” changes unfolding across society, the pope said. And while Christians are not “immune” to such changes, “this concrete world, with all its many problems and possibilities, is where we must live, believe and proclaim.” How has the situation of the church changed? Civil marriage and sacramental marriage are no longer “interrelated and mutually supportive.” Francis compared this change to the replacement of mom-and-pop shops with supermarkets:

There was a time when one neighborhood store had everything one needed for personal and family life. The products may not have been cleverly displayed, or offered much choice, but there was a personal bond between the shopkeeper and his customers.

Not anymore. Now supermarkets have taken over—“huge spaces with a great selection of merchandise.” Culture has become increasingly competitive. This culture, powered by an ethic of consumerism, encourages young people not to form lasting bonds. What matters is no longer the neighbor, but the satisfaction of one’s own needs in the here and now. “We have turned our society into a huge multicultural showcase tied only to the tastes of certain ‘consumers,’ while so many others only ‘eat the crumbs which fall from their masters’ table’ (Mt 15:27).” Young people rush to accumulate friends on social networks, which leads to “loneliness with fear of commitment in a limitless effort to feel recognized."

Bishops shouldn’t blame young people for living in such a world, Francis said. What young men and women need is not to hear their pastors saying “it was all better back then.” But rather, they need pastors who look at the problems “realistically,” with an eye toward action. Pope Francis warned bishops not to fall into the trap of presuming the culture’s indifference toward marriage is born of “pure selfishness.” No, many young people find themselves caught in a kind of paralysis—they see the beauty of marriage, but they put it off while waiting for “ideal conditions.” Pastors must remind them of the blessing of marriage. “We need to invest our energies not so much in rehearsing the problems of the world around us and the merits of Christianity,” Francis said, “but in extending a sincere invitation to young people to be brave and to opt for marriage and the family.”

“In Buenos Aires,” Francis said, departing from the prepared remarks, “many women would tell me, 'My son is thirty, thirty-four, and isn’t married. What should I do?’ I tell them, 'Don’t iron his shirts anymore!'” Francis called for a “holy parrhesia”—one of his favorite terms, Greek for “candid talk”—in which the church helps its young people move toward marriage. “A Christianity which ‘does’ little in practice, while incessantly ‘explaining’ its teachings, is dangerously unbalanced. I would even say that it is stuck in a vicious circle.”

A pastor protects the dreams of his flock, Francis said. “This ‘watchfulness’ is not the result of talking but of shepherding.” Being watchful means being present, being unafraid of “questions, of contact, of accompaniment.” In another ad-libbed moment, Francis recalled that “the Apostles couldn’t do it all.” When they found that they needed help, “they got together and they invented the position of deacon.” This was a decision that was “inspired by the Holy Spirit,” according to the pope. “What is the first job of a bishop?” Francis asked. To pray. And the second: to preach. “This dogmatic definition helps us—if I’m not mistaken, Cardinal Mueller—because it tells us what a bishop is,” Francis said, ribbing the head of the Congregation of the Doctrine of the Faith, who told La Croix last April that the CDF’s role is “to provide the theological structure of a pontificate.” Francis continued: “The bishop is called to be a pastor, to shepherd—first with prayer, and then with proclaiming the Gospel. And if you have time, you do the rest, and accept with humble Christian apprenticeship the familial virtues of God’s people.”

This is not an easy job, Francis acknowledged. Yet, “if we prove capable of the demanding task of reflecting God’s love, cultivating infinite patience and serenity as we strive to sow its seeds in the frequently crooked furrows in which we are called to plant, then even a Samaritan woman with five ‘non-husbands’ will discover that she is capable of giving witness," the pope said. He was alluding to a New Testament passage that some have used to criticize Cardinal Walter Kasper’s proposal to allow some divorced and remarried Catholics to receive Communion.

“The family is our ally,” Francis concluded, “our window to the world, and the evidence of an irrevocable blessing of God destined for all the children who in every age are born into this difficult yet beautiful creation which God has asked us to serve!”

'They always send a limo.'