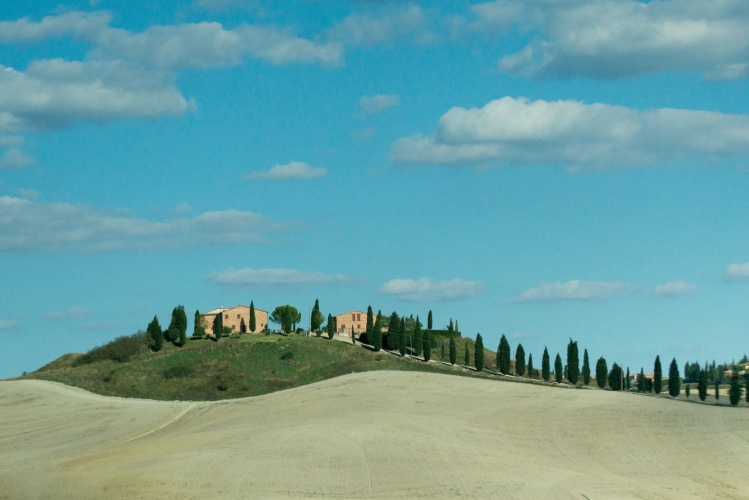 After the olivine waves of Marina di Torre del Lago,
we drive between colonnades of umbrella pines …
It is 7:30 p.m. and the midsummer sun has just descended
below the treeline … Lorenzo laments that the days
are getting shorter now. I think this is premature.
By our separate doors we leave the Fiat together.

The roadside broom and bluets seem to go together,
but past the threshold of the estate nothing is allowed to go
to picturesque ruin, and nothing runs riot. Mature
magnolias line the long approach to the villa, spines
of stiff-leaved groundcover bristle; it’s hardly paradise,
but I follow the gravel path to the single palm descended

from its paradisiacal prototype … The yard is scented
with thyme, and classical music as if from the ether
sounds from a distance; speakers might have risen to a dais,
but now there are speakers in the trees! Not long ago,
I would have been enchanted; yet even as one who pines
for the absolute, I don’t want to make a premature

assessment of the villa’s charms before I make a tour
of its offerings. It faces us as a goddess who condescended,
once upon a time, to face the photographers. Lorenzo opines
that Puccini was always hunting something, with either
rifles or leitmotif … Eventually we pass – Prego! –
through a portal, our uneasy little pas de deux

crumbling as we transition in a kind of sultry daze
from the vacant frontage with its orchestral imprimatur
to a backyard soundstage, a top-forty number and a gogo
troupe of girls dancing in synch. Mothers have descended
on the place with aunties, nanas, sparsely seated together
in rows of ordinary folding chairs hard on lower spines.

Lorenzo is galvanised by the sight. He pines
for something less abstract—where are the does
of yesteryear? … I wander off, aware of being thrust together
under artificial conditions. I’m bored with this amateur
production … It is an ennui so blank and open-ended,
it derives more from film and poetry than ego.

Ergo the pines, descended into premature darkness
under a spot of smelted apricot in the west. We bid adieux
together to swanhead spigots. And a wall of fig leaves…

First published in the London Review of Books. Used by permission.

Ange Mlinko is a contemporary poet-critic. Her latest collection, Venice, was published by Farrar, Straus, and Giroux.