By The Editors
Immigration
Race

In part two, assistant editor Griffin Oleynick, and audience development director Milton Javier Bravo are joined by Dylan Corbett and Marisa Limón Garza of the Hope Border Institute in El Paso, and Bishop Mark Seitz of the El Paso Diocese sits down with Commonweal's editor Dominic Preziosi. Catch up on part one here.

“Unfortunately, it seems that today we live as the pagans, and not as disciples of Jesus Christ.”—Bishop Mark Seitz
sharetweet 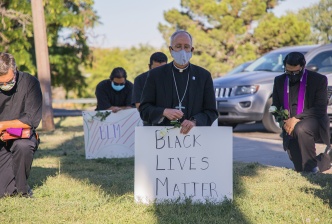