By The Editors
Race
Theology

In part one, we’re joined by Monsignor Arturo Bañuelas, a priest in the diocese of El Paso, and Professor Neomi DeAnda, the current president of the Academy of Catholic Hispanic Theologians of the United States.

“As laity we get worried about getting called ‘too political.’ But we should not be afraid of that.”—Neomi DeAnda
sharetweet 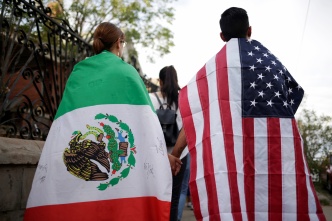