‘The Ballad of Buster Scruggs’
By Jared Lucky
Movies 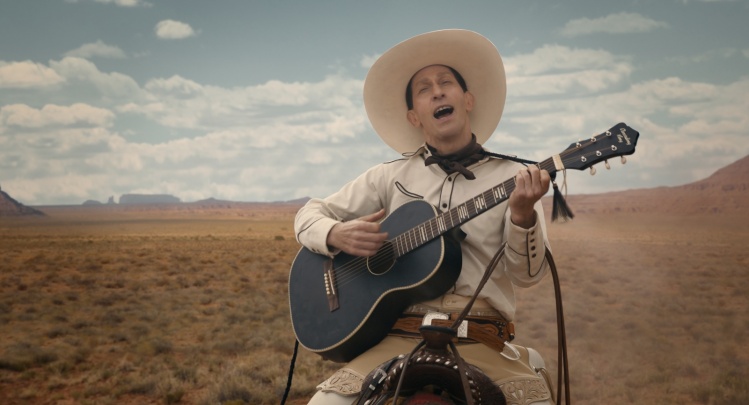 Watching a white-hatted cowboy shoot off a man’s fingers one by one, you might guess that the Coen brothers’ latest is a gory romp à la Tarantino. Fortunately, you’d be mistaken. The Ballad of Buster Scruggs, a collection of stand-alone vignettes produced by Netflix, is not a celebration of stylized violence. Nor is it a revisionist film, pedantically exposing the grimy “real West.” Rather, the anthology is a thoughtful but imperfect effort to return to the roots of the Western genre—albeit with an offbeat, parodic sensibility.

Buster himself appears only in the first of six wide-ranging tableaus, all of which feature breathtaking long shots that recall classics like George Steven’s Shane (1953) and John Ford’s The Searchers (1956). Nowhere is the engagement with genre conventions more clear, or more biting, than in the opening sketch. Scruggs eerily strums his guitar on horseback in Monument Valley, the iconic desertscape that Ford made legendary in Stagecoach (1939). Portrayed by longtime Coen-collaborator Tim Blake Nelson, Scruggs looks for all the world like Hank Williams’s evil twin. He is a singing, shooting, card-sharping cowboy outlaw, obsessed with his own self-aggrandizing nicknames, galloping through a Wild West so stylized it could be a video game. “Don’t let my white duds and pleasant demeanor fool ya,” Scruggs drawls to a bartender. “I too have been known to violate the statutes of man, and not a few of the laws of the Almighty.”

Scruggs’s spree of shocking violence culminates in a shootout with his antitype, a black-clad troubadour gunslinger played by folk singer Willie Watson. After the fatal draw, Buster removes his own white Stetson to admire two bullet holes in it: one clean, one brain-spattered. He’s been shot straight through the head. Scruggs’s winged, harp-toting soul wafts up to heaven, crooning a duet with the man who murdered him.

Scruggs is grotesque in the literary sense: comic but repulsive. His apotheosis takes aim at the cheap grace that prevails in many Westerns. The unregenerate Buster has no business ascending to a “place up ahead where men ain’t low down, and the poker’s played fair.” The unsettling absurdity of this first short calls attention to our protean expectations for the cowboy: hard-drinking roughrider, blue-collar everyman, romantic poet, and (most ridiculous of all) Christian knight. In life, death, and afterlife, Scruggs mischievously demolishes the “white hat” Western.

You can kill Buster Scruggs, but he’ll keep on singing.
sharetweet

Some will no doubt find Buster’s gore and the segment’s sheer unreality off-putting. But tellingly, his ballad is sung first, not last. The next five segments also tell stories in classic Western modes, but carry the series beyond mere parody. A printed book of “campfire tales” frames the anthology. At each transition, pages are turned by a wizened, anonymous hand—a fitting emblem of the curious alloy of history, folklore, and mass-entertainment that has always made up the Western.

In “Near Aldogones,” James Franco plays a New Mexico bank robber in a droll tale of justice served. There is a gallows involved, and some Coen-esque gallows humor. Many of the story’s elements are drawn from the life of the infamous Texan saloon owner and frontier judge, Roy Bean. Tragedy overwhelms an unlikely romance in “The Gal who Got Rattled,” an Oregon Trail epic that aims at historical realism. Craggy sierras encase Liam Neeson and Harry Melling in “Meal Ticket,” a Grimmian fable about Old West show business.

An anthology comprising such diverse material requires more binding than a fake book. Folk music ties the vignettes together and sets the pace for Carter Burwell’s magnificent score. A prospector’s hoarse tune crests into an orchestral idyll in the Jack London–inspired sketch “All Gold Valley.” In “Meal Ticket,” Liam Neeson’s drunken rendition of “Weelye Weelye Wailya” gives an ominous glimpse of his character’s brutality. Coen fans will find a familiar trope in Neeson’s character: the benefactor who turns out to be a monster, played to perfection by John Goodman in both Barton Fink and O Brother Where Art Thou.

The true theme, musically speaking, is “Streets of Laredo,” plucked by a doleful Spanish guitar as the book opens in the first shot. The dirge is ingeniously resurrected in the last sketch when Brendan Gleeson sings “The Unfortunate Rake,” the old Irish ballad that evolved into the cowboy lament. Folk songs, like folk tales, are morbid. They fit well in this anthology, a scorched-earth campaign against happy endings. Even “All Gold Canyon,” in which the protagonist manages to survive, exudes a funereal eeriness. As the prospector hits his gold vein, the shot widens to reveal—just for an instant—the grave-shaped hole he has inadvertently dug himself.

Moments like these gradually lead one to realize that The Ballad of Buster Scruggs is not, after all, about the cheapness of life. It’s about the mystery of death. The flip supernaturalism of the first vignette slowly transforms into a profound reckoning with the afterlife, epitomized by the last chapter. “The Mortal Remains” is the only sketch that dispenses with expansive landscapes; the shots are tightly confined within a midnight stagecoach. With a folkloric existentialism that evokes The Seventh Seal, a pair of Mephistophelean bounty hunters gradually unnerve the other three passengers. A corpse is strapped to the roof, bound for Fort Morgan. But the motley travelers finally start to sense that they too are “negotiating their passage.”

For all its thematic power, Buster Scruggs still suffers from some formal limitations. At times, anthology yields to miscellany. The shorts were pulled from a scrap bin of storyboards written up over twenty-five years, and the series as a whole never quite attains the immersive grandeur of a True Grit. Perhaps more significantly, for all its diversity, the anthology falls short of a true panorama of the West. Indians serve always as plot device, never as characters. Comanche raiders merely provide a deus ex machina in “Near Aldogones” and a diabolus ex machina in “The Gal Who Got Rattled.” Rich historic figures like black cowboys and Mexican rancheros are neglected entirely. (The closest treatment of the Spanish West comes from a few bad hombres in the first sketch; in the credits, they are listed as “Cantina Scum.”)

There is some artistry in the Coens’ deliberate choice to avoid a pinched, hidebound realism. Dime novels and silent films coexisted with the waning days of the Old West. For all the literary distortions that revisionists love to hate, the image has at some level become the reality. Animating every part of this film is that most famous of John Ford mantras, spoken to Jimmy Stewart in The Man Who Shot Liberty Valence (1962): “When the legend becomes a fact, print the legend.” But even by this standard, there are serious blind spots. Western legend brims with the kinds of characters who get no airtime in Buster Scruggs. There is plenty of Coen-worthy material in the life of the half-white, half-Indian Quanah Parker, for example, the last war chief of the Comanches. Or perhaps Bill Picket, the larger-than-life black steer wrestler who performed with Wild Bill in his later years.

Still, there is no denying that Buster Scruggs breathes new life into a timeworn genre with the oldest of all themes: death. These six weird vignettes are a fresh and fitting contribution to a tradition that constantly resurrects itself. You can kill Buster Scruggs, but he’ll keep on singing.