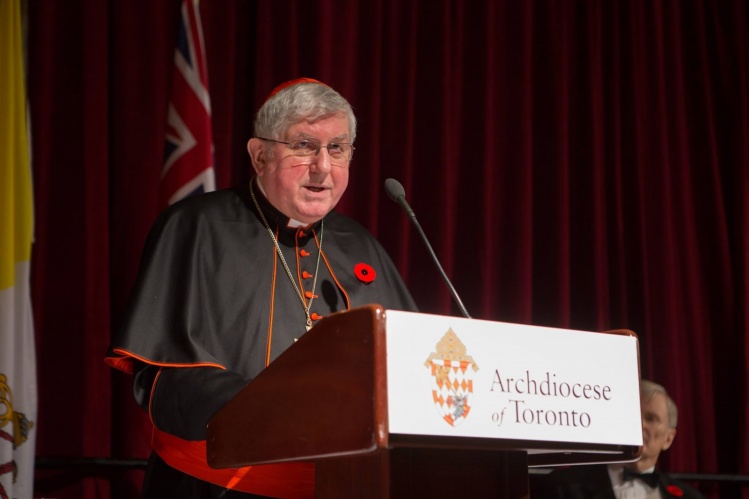 Cardinal Thomas Collins of Toronto addresses an audience of more than 1,600 at a dinner in 2018. (CNS photo/Emanuel Pires, courtesy Archdiocese of Toronto)

Most importantly, the bishop, Thomas Dowd, Auxiliary Bishop of the Archdiocese of Montreal, was non-defensive, persuasively contrite, uncharacteristically spin-free and transparent in his responses, and genuinely warm and nonjudgmental in his pastoral approach.

Dowd was on air because of the controversy surrounding the allegations, trial, and sentencing of Brian Boucher, a priest-abuser of long standing. Dowd had listened to Boucher’s accusers, believed them, advocated on their behalf, and daily attended Boucher’s trial in order to be with them, the survivors.

It was clear we had crossed a national threshold: a Canadian bishop talking on a secular network about clerical sex abuse in a manner that was as credible as it was humble. And none too soon.

Throughout 2019 the Canadian Catholic Church was rocked by a series of disclosures and investigations that reopened the wounds of clerical sex abuse. In addition to the Boucher trial in Montreal, TVOntario, the provincial public-television broadcaster, aired Prey, a documentary on Basilian priest Hod Marshall, the serial abuser of seventeen minors over a teaching span of thirty-two years in three Ontario cities—Sudbury, Windsor, and Toronto. Oversight by the Congregation of St. Basil was deficient, the legal strategies bereft of a Gospel-inspired justice, the end result demoralizing for all. Marshall confessed prior to his death in 2014 at ninety-two, but the legal wrangling and protracted default maneuvers lingered without a satisfying resolution. Hence, the scorching effect of the documentary.

Meanwhile, in an unrelated development, the Basilian Archbishop of Vancouver, Michael Miller, past president of the University of St. Thomas in Houston, empowered a review committee to publish the names of nine of thirty-six abusers in the archdiocese over the last seventy years. Because of legal challenges, Miller is currently unable to release the entire list but his intention is to do so. Public patience is at a premium, however. Such an episcopal initiative is unprecedented in Canada, although not in other national jurisdictions. What Miller did was to underscore the disturbing reality of episcopal dilatoriness on the clerical sex-abuse file, the failure to have a country-wide strategy of redress, the shameful paucity of data on the national scene, and the lack of resources and effective consulting. Unlike the Catholic Church of England and Wales with its Nolan and Cumberlege Reports, in Ireland with its Ryan and Murphy Reports, and in the United States with its John Jay College of Criminal Justice Report, the Catholic Church in Canada has no broad review encompassing all the regions of the country accumulating statistics essential for an effective response to a pan-national crisis.

This is not to say that the church leadership has been unresponsive. The Winter Commission, established by Alphonsus Penney, the Archbishop of St. John’s in Newfoundland and Labrador, investigated the abuses in 1989–1990 associated with the scandal-ridden Mount Cashel Orphanage under the sponsorship of the Irish Christian Brothers, and as a result of its work he tendered his resignation. Concurrent with the Winter Commission was the Hughes Inquiry, a Royal Commission created by the government that provided a stark indictment of ecclesiastical negligence and the catastrophic collapse of appropriate oversight. Although Penney was not required to step down, his authority was profoundly compromised; in subsequent years, well into his retirement, he would be roundly criticized for his failure to handle Father James Hickey, the notorious pedophile and popular church spokesperson for the 1984 papal visit to Newfoundland.

In 1992, out of the ruins of the Mount Cashel disaster, the Canadian Conference of Catholic Bishops (CCCB) published a collection of materials for diocesan and parish discussion, “Breach of Trust, Breach of Faith,” and a detailed report, From Pain to Hope, containing some fifty recommendations. It was neither timid nor nuanced in acknowledging the abuse that had flourished precisely in the absence of serious protocols, or indeed even pastoral expectations of accountability.

In 2010, Cardinal Thomas C. Collins of the Archdiocese of Toronto, the premier Anglophone prelate in the country, put in place a tightened regime of rules of conduct and reporting. Then, in 2018, the bishops would return with a significant revision of From Pain to Hope titled Protecting Minors from Sexual Abuse: A Call to the Catholic Faithful in Canada for Healing, Reconciliation and Transformation. Individual dioceses issued their own guidelines and procedures to ensure appropriate vigilance. All contributed to the illusion that somehow the Canadian church had escaped the crisis that had consumed other churches in the Catholic communion.

The church’s response to any new eruption of charge and lawsuit has been piecemeal...national standards, national oversight, and national data are all still missing.
sharetweet

And it was an illusion. The church’s response to any new eruption of charge and lawsuit has been piecemeal. The diocese or religious congregation or order implicated is under legal obligation to react, but national standards, national oversight, and national data are all still missing.

The feisty and prophetic nun, bioethicist, and pediatrician Nuala Kenny of Halifax has for years insisted on the need for heightened awareness around the sex-abuse crisis. In her role as a frequent advisor to the CCCB, Kenny has warned that the procedures that the church has in place are insufficient to stop abuse, and that the church’s refusal to deal adequately with the threat is a continuing scandal in itself. In her 2019 book Still Unhealed: Treating the Pathology in the Clergy Sex Abuse Crisis, she writes, “As a physician trained to respond rapidly to illness and risk of harm, the denial and delay in leadership response has both baffled and angered me. My heart aches over the often vicious disagreement regarding the accurate and comprehensive diagnosis and treatment of the root causes of this crisis.”

Convinced of the systemic problems—the deeper pathology—Kenny is tenacious in her advocacy for greater transparency and radical reforms in church structures. One of the reforms that could be instituted immediately: the education of future priests. But little has changed on this front, in spite of Kenny’s arguments and the recommendations of the 1992 report. Today, very few women teach in seminaries. Bishops prefer to spend money renovating classical seminaries—St. Peter’s in London, Ontario, is a case in point—and to maintain the status quo at these institutions. St. Augustine’s Seminary in Toronto, the largest in English-speaking seminary in Canada, is a redoubt of clerical isolationism and theological conservatism.

And while the bishops navigate around the still-perilous decline of priests in the parochial presbyterate—clustering of parishes, frantic recruitment of foreign priests, increased use of minimally educated permanent deacons—instances of sex abuse continue to surface.

The public attention accorded the Boucher trial in Montreal was merely a precursor of what was to come in the rest of 2019. A petition before the House of Commons in Ottawa initiated by an abuse survivor in the Diocese of St. Catharine’s in Ontario called on the federal government to establish an inquiry into the church’s handling of abusive priests. The petition emerged around the time of the creation of a new national body, Advocates for Clergy Trauma Survivors in Canada, which has called for lists of abuser clerics, living and dead, from the local ordinaries. This more aggressive approach by survivors was largely inspired by initiatives in the United States, where state attorneys-general are increasingly aggressive in demanding full diocesan disclosure and the elimination of statutes of limitation.

The Canadian church has come a long way from the time when damage control was the dominant pastoral modus operandi. When Thomas Rosica, founder and CEO of Salt + Light Catholic Television Network, moved to suppress the publication of Suffer the Children unto Me: An Open Inquiry into the Clerical Sex Abuse Crisis, a work that the lawyer and broadcast journalist Peter Kavanagh and I wrote in 2010, the publisher rightly refused. Rosica’s reasoning: it would “disturb the bishops.” Such an attitude was not atypical, reflecting an abiding concern about institutional reputation, already sundered by media exposure.

If episcopal documents and statistical studies were in short supply, investigative journalists and creative artists were active in bringing the persistent problem to light. With Unholy Orders: Tragedy at Mount Cashel, Michael Harris did for Canada what Jason Berry did for the United States with Lead Us Not into Temptation: Priests and the Sexual Abuse of Children. Film documentarian John N. Smith shocked the nation with his visceral docudrama The Boys of St. Vincent; the multi-award-winning novelist Linden MacIntyre’s The Bishop’s Man presciently illustrated the spiritual quandaries of the Diocese of Antigonish, Nova Scotia, just prior to the national trauma occasioned by the arrest of its bishop, Raymond Lahey, for possession of child porn. Perhaps most moving was the film Fall by Terrance Odette, a story in which repressed memory, psycho-sexual immaturity, and aching loneliness combine to upend the life of a priest in Niagara Falls.

Of course, far more still needs to be done. In December 2019, Eric Oland, the Provincial of the Jesuits of Canada, announced that the order will release a list of abusers in the coming year following a detailed audit, disclose the full costs of out-of-court settlements, and actively and publicly promote the healing of victims. Jesuits in the American Midwest had already moved in that direction, and the decision by the Jesuit Pope Francis to lift the pontifical secret to ensure uncompromised and direct cooperation with civil authorities on issues of abuse and cover-up indicates that a sense of urgency has taken hold.

Many church leaders in Canada now seem determined to be proactive rather than defensive. Undoubtedly, the bishops recognize that they no longer control the narrative: survivors are emboldened by their American peers and are pushing not just for remedial action but also for radical reform, while provincial and federal attorneys-general and politicians seem compelled to take action. Hence, the initiatives by Miller of Vancouver and Oland of the Jesuits. They are in the vanguard. More are to come. Meanwhile, St. Paul University in Ottawa, a pontifical university, has launched the Centre for Safeguarding Minors and Vulnerable Persons, diocesan officials across the country are reviewing their policies, and Nuala Kenny continues her unstoppable crusade for right judgment supported by action. Canadian theologian Catherine Clifford cautions, “If the shepherds of the church really want to earn back the trust of the faithful and restore credibility with the wider community...regular audits and systems of reporting must become a permanent feature of Catholic diocesan life—as they are in all public institutions and corporations today.”

The entire Canadian church, wearied and demoralized by what novelist Leo Furey calls the “sadness sickness,” is desperate to exorcise the demon of abuse once and for all—to, in the words of Provincial Oland, allow people of faith to work for our common world without having to carry “this yoke over our shoulders.” Amen.

Rebel with a Cause