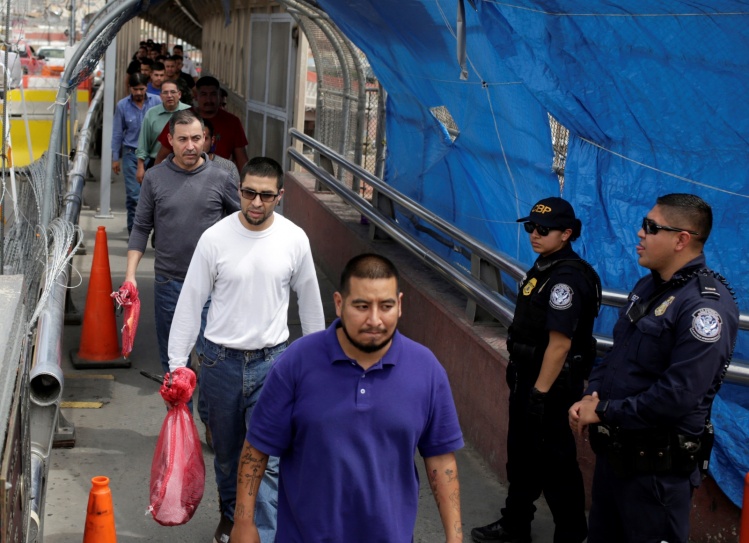 Donald Trump was in the federal courthouse in Manhattan, and very happy to be there. It was 1988, and his wife, the former Ivana Zelníčková of Gottwaldov, Czechoslovakia, was one of 142 immigrants just sworn in as U.S. citizens. By then, the Trumps had been married for eleven years and had three children. “It was about time I became an American,” Ivana Trump told me, a reporter on the court beat, after a joyful ceremony that, as she put it, “made it hard not to cry.” Donald Trump added: “It’s a great country, and that’s where a great woman should be.”

The oath ceremony is a nearly religious ritual in which the American gospel—the good news of freedom and democracy—is preached to the newest members of the choir. “By your presence, America is vastly enriched,” the judge told the new Americans. He was not referring to their net worth.

That lesson has eluded Donald Trump the president: his administration has just changed the standard for citizenship in a way that, as the New York Times headlined, “could alter the face of the American immigrant.” A new rule redefines who is likely to become a “public charge,” and is therefore ineligible for citizenship. It changes the process to put much more emphasis on an applicant’s income.

The Trump administration portrays this rule as no more than the continued application of federal laws that have been in effect since 1882, but the emphasis on income is a significant shift that works to the disadvantage of working-class immigrants, especially those with large families. Catholics of all political backgrounds should take note that these laws—based on the idea that immigrants often mooch from the taxpayers—are rooted in anti-Catholic bigotry.

They trace back to nativist attacks on impoverished Irish Catholic immigrants in Massachusetts and New York during the famine years of the 1840s. Both states, rife with anti-Catholic bias, passed laws to bar anyone who might become a “public charge.” These passed into the first comprehensive federal immigration law, enacted in 1882, barring “idiots, lunatics, convicts, and persons likely to become a public charge.” The new rule notes that the “public charge” barrier has continued in federal immigration law ever since—but it’s obvious that millions of hard-working immigrants have been granted citizenship over the years despite being dirt-poor. That may no longer be the case.

The new rule makes having a large family or multi-generational household a liability, since the federal poverty level increases with household size.
sharetweet

Working-class immigrants have traditionally met the “public charge” requirement with the help of sponsors who vouch for them with a sworn pledge to provide financial support if that becomes necessary. Previously, a sponsor had to show an income above 125 percent of the federal poverty level to qualify. The Trump administration has now shifted this requirement from the sponsor to the immigrant seeking citizenship. Income is not the only standard, but dollars and cents will weigh heavier in the process. And this makes having a large family or multi-generational household a liability, since the federal poverty level increases with household size.

It’s a more technocratic version of the laws passed in response to the Irish migration of the mid-nineteenth century. “The motivation for these laws derived from both financial concerns and cultural prejudice against the Catholic Irish,” the Catholic Legal Immigration Network said in its formal comments on the proposed rule. “A disproportionate number of those who were excluded and deported were Irish women, especially those who were single, divorced, widowed, pregnant, or arriving with children, who were viewed as more economically vulnerable.”

This concern ought to strike deep into the American Catholic psyche; it brings together long-standing priorities of justice for the immigrant poor and working class; the unity of the family; and the right to life.

In their formal objection to the rule, the U.S. Conference of Catholic Bishops cited research that the rule’s new income standards could force as many as 200,000 married couples a year to choose between departing from the United States or living apart. The letter also notes that federal authorities acknowledge having a large family or household can be a negative factor for a citizenship applicant. The proposed rule “essentially punishes applicants who choose to have larger families—thus creating another disincentive for individuals to have children or to care for aging parents,” the bishops’ conference said in a joint letter with Catholic Charities USA. It added: “It is the position of the church that creating a penalty for caring for children or caring for the elderly is deeply troubling. Protecting and defending human life is sacrosanct and caring for family members is an imperative demanded by God, as stated in the Fourth Commandment.”

The Trump administration’s response to such comments is that it is simply carrying out the 1996 federal immigration overhaul, in which Congress and President Bill Clinton did indeed provide for “family status” to be a consideration in granting citizenship. But since the new rule puts much more emphasis on family income, having a larger household becomes a much more damaging factor for a working-class immigrant who aspires to citizenship. (For the administration’s official non-response to the specific study the bishops cited about the impact on married couples, see pages 730 and 731 of the rule’s documentation.)

Donald Trump has twice married immigrant Catholics who became U.S. citizens—his present wife, Melania, and Ivana, who describes her parents as devout Catholics. Ivana writes in her 2017 book Raising Trump that she sought to instill religious values in her children by hiring two devout Catholic nannies from Ireland, Bridget Carroll and Dorothy Curry.

But Irish Catholic immigrants are no longer the nativists’ targets. The nativists have moved on to other nationalities, much as Ivana Trump did in this 2016 interview with the New York Post:

“I have nothing against Mexicans, but if they [come] here—like this 19-year-old, she’s pregnant, she crossed over a wall that’s this high”—Ivana lowers her hand to 4 inches above her wall-to-wall carpeting. “She gives the birth in American hospital [sic], which is for free. The child becomes American automatically. She brings the whole family, she doesn’t pay the taxes, she doesn’t have a job, she gets the housing, she gets the food stamps. Who’s paying? You and me.”