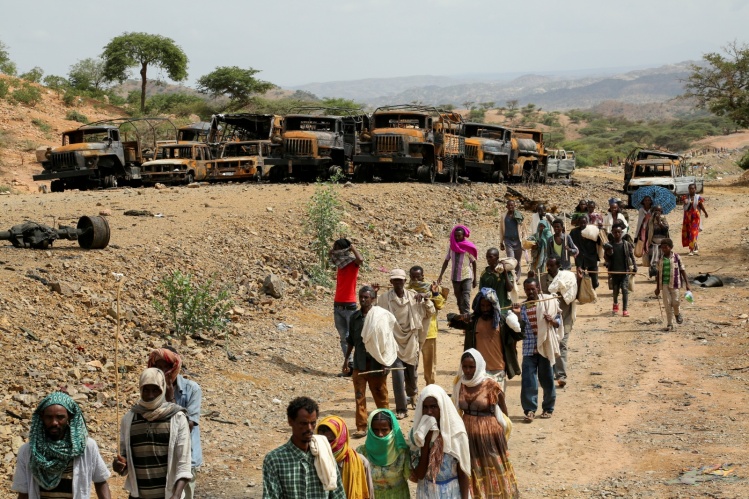 On November 2, good news emerged from a peacemaking summit in Pretoria, South Africa. Nearly two years after a civil war began in Ethiopia, leaders from the Ethiopian government and Tigray People’s Liberation Front (TPLF) announced a ceasefire. The war has left hundreds of thousands of people dead, including many civilians. It has displaced millions more from the Tigray region, many of whom have fled to Sudan. Those who remain behind have faced dire shortages of food and medical care, especially after the Ethiopian government cut off supply lines to the region. International bodies have accused the government of using starvation as a weapon to cow residents into submission.

The conflict began on November 3, 2020, when Tigray special forces attacked an Ethiopian National Defense Force (ENDF) base in the Tigrayan capital, Mekelle, after months of tension. Ethiopian Prime Minister Abiy Ahmed ordered ENDF troops to capture the city. He also collaborated with Eritrean forces—which have their own historic animosity toward Tigrayans because of their role in the Ethiopian-Eritrean War of 1998–2000—as they attacked the TPLF from the north. Since then, however, the TPLF has recaptured Mekelle, advanced into the neighboring regions of Amhara and Afar, and almost marched on the Ethiopian capital, Addis Ababa.

If the world wants to see a lasting peace in Ethiopia, it must keep pressure on Abiy to hold up his end of the deal.
sharetweet

Early in the conflict, Abiy ordered a media blackout; telecommunications networks were shut down and journalists were prohibited from covering the war. This has made it difficult for international bodies or the media to know exactly what has occurred in Tigray during the past two years. It is still not fully clear, for example, whether Tigray militias were the victims or the perpetrators of the horrific Mai Kadra massacre, in which upwards of a thousand people died.

The ceasefire is a welcome development after so much suffering. In the agreement overseen by the African Union, the TPLF pledged to disarm in exchange for the reopening of supply lines to Tigray, where there is urgent need of humanitarian aid. The Tigrayan regional government will be reincorporated into the national government, which will regain control of all federal facilities in Tigray and, in return, has vowed to rebuild damaged infrastructure in the region.

But some worry the agreement is destined to fail. Abiy has bragged that he received “100 percent” of his demands in the agreement. The timeline for Tigrayan disarmament is only thirty days—arguably far too short a period. Eritrea was not party to the peace process, and is not mentioned in the agreement. It is not even clear whether Eritrean forces will leave Tigray. As Mohamed Kheir Omer wrote in African Arguments, “It is difficult to imagine how Tigray soldiers will feel confident laying down their arms when Eritrean soldiers, who intervened in support of [the] federal government, are still believed to be present in the region.”

If the world wants to see a lasting peace in Ethiopia, it must keep pressure on Abiy to hold up his end of the deal. The United States, which attempted to facilitate a peace process months ago, holds some power here. Abiy is looking for IMF and World Bank loans to finance his legacy domestic projects; President Biden ought to make it clear that the United States will not support the extension of credit unless humanitarian aid arrives in Tigray on schedule. As Olusegun Obasanjo, the former Nigerian president and current head of the African Union, insisted, the peace deal “is not the end of the peace process, but the beginning of it.”