Where the most prophetic conversations take place
By Claudia Avila Cosnahan
U.S. Catholicism
Women in the Church 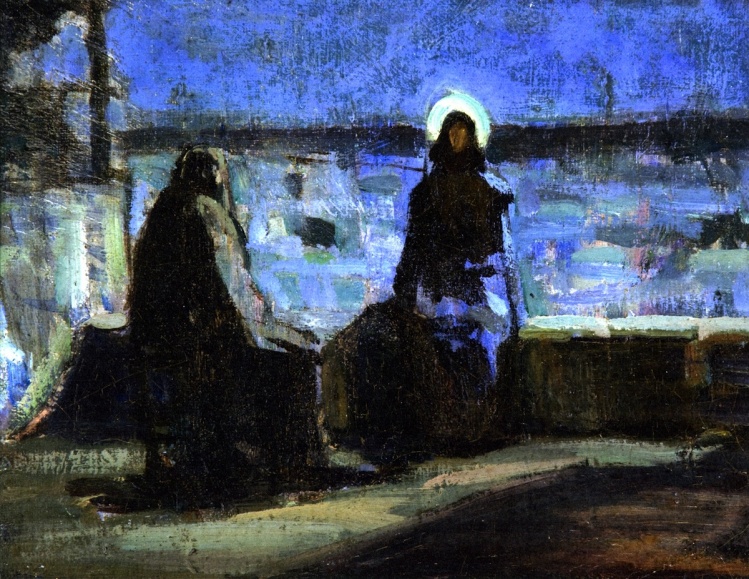 As a graduate student at Loyola Marymount University, I took a course with theologian Brett Hoover called Theology of the Parish. He once joked that there’s also a theology of the parking lot. It was an image that stayed with me. I’ve come to think of the “parking lot” as any place we gather after parish events to share with friends and colleagues what we really thought about what we’d just seen and heard, to confide our concerns, and to plan and form partnerships in ministry. In my experience, these unofficial meetings have been where the most genuine, prophetic, and revelatory conversations take place. And I’ve often wondered whether women in Church leadership are more inclined to participate in these unofficial meetings than in official ones.

Oprah Winfrey’s interview last week with Prince Harry and Meghan Markle drew more than 17 million viewers, myself included. One of Winfrey’s questions to Markle resonated with me. Referring to the institution of the British monarchy, Winfrey asked: “Were you silent or were you silenced?” In my “parking lot” meetings about ecclesial work, I often hear women express some version of “I wanted to say something, but I wasn’t sure if I should.” Women who hold positions of leadership in the Church sometimes do so at the expense of their voice. It’s not an explicit experience of silencing. Instead, women leaders are subjected to microaggressions that communicate or remind them not only of their place in Church structures but also of the impermanence of the particular positions they hold.

During a month in which we celebrate women’s history, the institutional Church celebrates that women sit at various ecclesial tables. However, women with places at the table have to choose wisely about which comments they make, what topics they raise—what battles they fight. Women remind each other in the “parking lot” that there’s a difference between being silent and being silenced. It’s not cowardice that keeps them from speaking in official settings; many times, it’s self-preservation. We use various forms of the “parking lot” as safe spaces to say the things we can’t say otherwise, to be affirmed, and to plan a way forward together. These spaces are stripped of the dangers found in official gathering spaces. In these meetings women support one another; they reclaim the voice they felt was momentarily taken from them; and they are reminded of the greater purpose they serve and of their worth in the eyes of their creator.

The “night” in this encounter feels more like a place free of the dangers and of the trappings associated with Nicodemus’s peers.
sharetweet

Nicodemus, in the Gospel reading for this fourth Sunday of Lent, has always held a special place in my heart. Of course, he did not experience the pain of the patriarchy, but there are some aspects of his experience that speak to the experience of women Church leaders. Nicodemus was a ruler of the Jews, a Pharisee who held a place of leadership in the Sanhedrin, a teacher of the faith, and possibly an elder. Yet he goes to meet Jesus at night. Many interpret this choice as an indication of a desire for secrecy and a fear of being associated with Jesus. However, Nicodemus greets Jesus by saying, “Rabbi, we know that you are a teacher who has come from God, for no one can do these signs that you are doing unless God is with him” (John 3:2). There are various instances in which leaders of the Jews engage Jesus. Nicodemus is not doing anything out of the ordinary by speaking to him, for he recognizes Jesus to be another teacher of the faith. The “night” in this encounter feels more like a place free of the dangers and trappings associated with Nicodemus’s peers, free of the confrontational nature of the encounters Jesus has in the daytime. It’s a calmer space that allows for an authentic dialogue between two teachers, who can engage in a more genuine conversation culminating with Jesus’s eschatological revelation found in today’s Gospel.

Women’s “parking lot” conversations are not intended to be secretive. They simply occur in places free of the trappings and constraints of institutional spaces, allowing women to realign themselves with God by being affirmed by the movement of the Spirit within them. I’m often reinvigorated by the prophetic nature of these “parking lot” conversations. I can appreciate that Oprah Winfrey and Meaghan Markle chose a private backyard in California to enter into conversation away from a monarchical environment that had become increasingly confrontational for the Sussexes. Jesus in his discourse says, “But whoever lives the truth comes to the light” (John 3:21). His revelation to Nicodemus is a light in the night. It is, after all, easier to pinpoint the source of light in the night. For women Church leaders, that light continues to shine brightest in the parking lots.