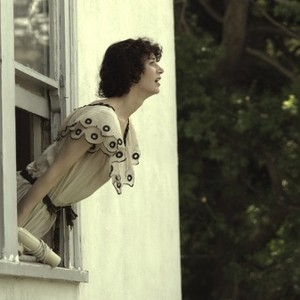 Miranda July's "The Future," her second full-length film following 2005's "Me and You and Everyone We Know," is decidedly offbeat. It features a talking cat and a walking t-shirt, for starters, and viewers not used to surrealism may be put off by such oddities. Unless you know that you absolutely can't tolerate talking cats under any circumstances, though, July's sophomore effort is worth checking out. (Perhaps you will even like the cat. I originally went to see the movie last week because I got a brief email recommendation from a friend: "You should see this movie. It wasn't fantastic, but there were parts I appreciated. The narration was done by a cat named Paw-Paw, there were some crazy metaphors about the suburbs, and a bit of magical realism.The best part is the cat.")The story centers on a thirty-something urban couple, Jason and Sophie, who are considering taking the next big step toward maturity and adopting a cat. Not a kitten who might be around for ten or fifteen years; that would be an unfathomable commitment. They choose a sickly, older cat, who will live six months or up to five years, "if he bonds with you." The latter possibility terrifies them, but they work up enough courage to sign the papers anyway. Then they have a month to wait until the cat, Paw-Paw, is healthy enough to go home with them.They decide to spend that month enjoying the last of their freedom, but the impending responsibility of cat ownership propels them into an existential crisis of farcical proportions. Jason decides to stump around the neighborhood collecting donations for an environmental nonprofit; Sophie has the internet shut off to their apartment and they share a frantic last few minutes of web access, with Sophie urging Jason to "google important things like flu warnings."

With sometimes-painful awkwardness they begin reaching out to others, too. Jason buys a used hairdryer and strikes up an unlikely friendship with the old man selling it. Sophie begins an equally unlikely and awkward affair with an older man. Sophies venture beyond her comfort zone is not as innocuous as Jasons, obviously. In its aftermath, Sophie and Jason must confront the fact that like it or not, pet owners or not, they have become adults, and their adult choices have adult consequences.The tale plays out like an archetypal departure from Eden, and July underscores the pervasive sense of innocence lost with deft directing. There is something eerily childish about the way Sophie and Jason move and talk. There is one scene where Sophie is kneeling on the floor, and Jason kneels in front of her and pulls a blanket over her because at that moment he cant bear to look at her the motion of a desperate toddler trying to make a Scary Thing go away. There is another where Sophie runs out into a driveway barefoot, in her nightgown, and stands on tiptoe. In the mornings she greets Jason with a cloyingly infantile "Hi, person." These childish physical poses and verbal tics are not pointless affectation; they serve to underline the neurotic childishness of the characters' psyches. They also invite the rest of us to consider to what extent, bumbling through life as we do, we are all always children.At times it's hard to figure out which is which: when the childishness is neurotic, when it's just human, and when it's a hipster filmmaker pushing her trademark affectations a little too far. But thats part of July's point, I think. If one becomes paralyzed by such questions and hemmed in by a neurotic need to get everything exactly right the first time and not make any mistakes, reaching actual maturity becomes impossible. Early on in the movie, when the vet tech tells Sophie and Jason that Paw-Paw could live up to five years if he bonds with them, they are dismayed because they don't really want to commit to a five-year relationship with a pet, yet they hasten to reassure themselves that since of course they will be good parents and not do anything wrong, he will live the full five years. They would never undertake anything that they might fail at, and they would never fail at anything that counts right? A few scenes later, the old man with the hairdryer warns Jason in a prophetic warble that inevitably, in the course of their relationship, Jason and Sophie "will do terrible things," an assessment that Jason at first cannot comprehend. At last, though, they are forced to admit they are indeed capable of failure, and more than that, of actual wrongdoing and that only by acknowledging this fact can they hope to escape the prison of their neurotic perfectionism. (I found it interesting that Sophie, not having categories like "betrayal" or "sin" in her vocabulary, resorts to describing her newly-discovered capacity for wrongdoing with the closest word she knows: being "wild." It is truly a shock to her that she can be "wild." That one word used twice in the film at precisely-placed intervals, with reference to Paw-Paw at the beginning and to Sophie herself later on takes on impressive resonance, standing in as it must for a whole dictionary of moral concepts.)In some ways the film ends up being a cautionary tale about children raised like hothouse flowers, for whom crossing the threshold from childhood into maturity requires quasi-miraculous intervention. I'm glad the problem of infinitely extended childhood in contemporary society is beginning to be addressed more vocally: see for example recent essays in The New York Times and The Atlantic Monthly. July, tackling the problem from a cinematic angle, has a keen feel for its emotional cost. The result is a lightweight but lovely little film, funny and tragic, relatable and weird in equal measure.