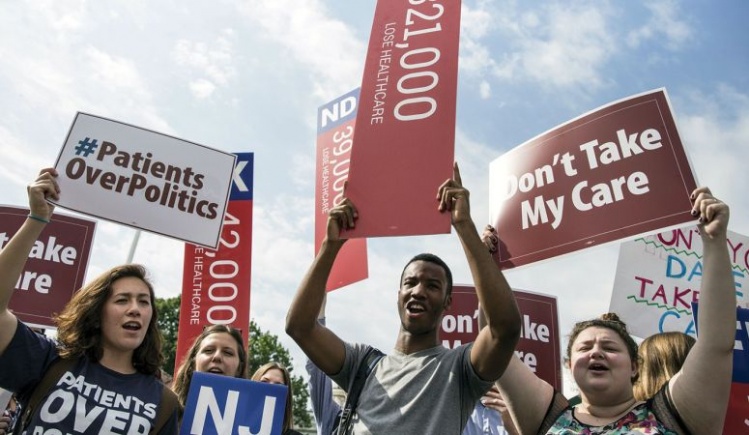 As I've watched Republicans in Congress, under the leadership of President Donald Trump, prepare to dismantle the Affordable Care Act, I’ve been thinking a lot about luck. It’s a word I find myself using when I talk about my own experiences with health insurance. Luck, after all, was for a long time the standard way to determine which Americans got care and which ones suffered.

Mine is a tale of good luck. I got kicked off my parents’ health-insurance plan when I finished college, as was the custom at the time. I was working an assortment of internships and jobs—some paying, some not, none with benefits—so I went for almost a year without any coverage. Nothing bad happened. Lucky! Then I was lucky enough to land a job with benefits, and I was lucky enough to notice what turned out to be a cancerous tumor in my neck before I left that job to go back to freelancing. I was lucky that my health stayed good enough, and my employer was flexible enough, for me to keep working around my chemotherapy schedule. And I was lucky that, by the time I got clear of cancer and left that job to recuperate, I had met my future husband and could rely on his help to pay for COBRA coverage.

We got married, and then he lost his job, but we were still lucky in that we could afford to continue our coverage until he was working again. A gap in coverage could have made us uninsurable. The best luck we’ve had was the passage of the Affordable Care Act (ACA), which created the health-insurance exchange that allowed us to sign up for a plan to cover our growing family while I stayed home with the kids and my husband pursued a master’s degree and worked part-time. The individual market Obamacare built meant we no longer had to get insurance through our jobs, which made it possible for us to make a living that didn’t come with benefits attached.

When I look back now, I’m amazed that Americans ever accepted the idea that health insurance was a perk that came with steady employment, and if you didn’t have the latter you’d have to make do without the former. It was an awful system—not bodies-in-the-streets awful, maybe, but awful just the same.

Obamacare is far from a perfect solution. There’s still too much hassle and expense. Our family has changed plans a few times, once in a scramble to keep our kids’ pediatrician and once because the co-op that insured us went under. Our choices are narrow, and our premiums and deductibles are certainly too high. These are the flaws Republicans have seized on to paint Obamacare as a failure from which Americans are desperate to be rescued. But the only plans the GOP has offered would make these very problems worse. Meanwhile, because we can buy insurance on our own, and do so without worrying about getting denied or shunted into a pricy high-risk pool due to “pre-existing conditions” like my onetime bout with cancer or my current pregnancy, we don’t have to depend quite so much on luck to see us through the next crisis.

The Affordable Care Act reduced the role of luck in getting adequate health-care coverage in America. It didn’t eliminate it. Bad luck can still ruin lives in a shameful variety of ways. But it was a hard-won victory, perhaps just a first step in reforming a system of doling out health insurance according to arbitrary good fortune and leaving the most vulnerable even more so. There were plenty of reasons to oppose the ACA. But to support repeal with no clear replacement plan is to support taking health care away from twenty to thirty million Americans, knowing they’ll be abandoned to a system that routinely leaves people high and dry through no fault of their own.

Even if the threatened repeal sends our premiums soaring or eliminates our coverage altogether, I might yet be one of the “lucky” ones who manage to avoid catastrophe. But after a few years I’ve gotten used to thinking of health care as a right, not a perk. For Republicans to reverse that change is irresponsible and cruel. And when they claim they’re doing it to “rescue” Obamacare’s customers, they’re really pushing their luck.

Another group of voters the GOP lost