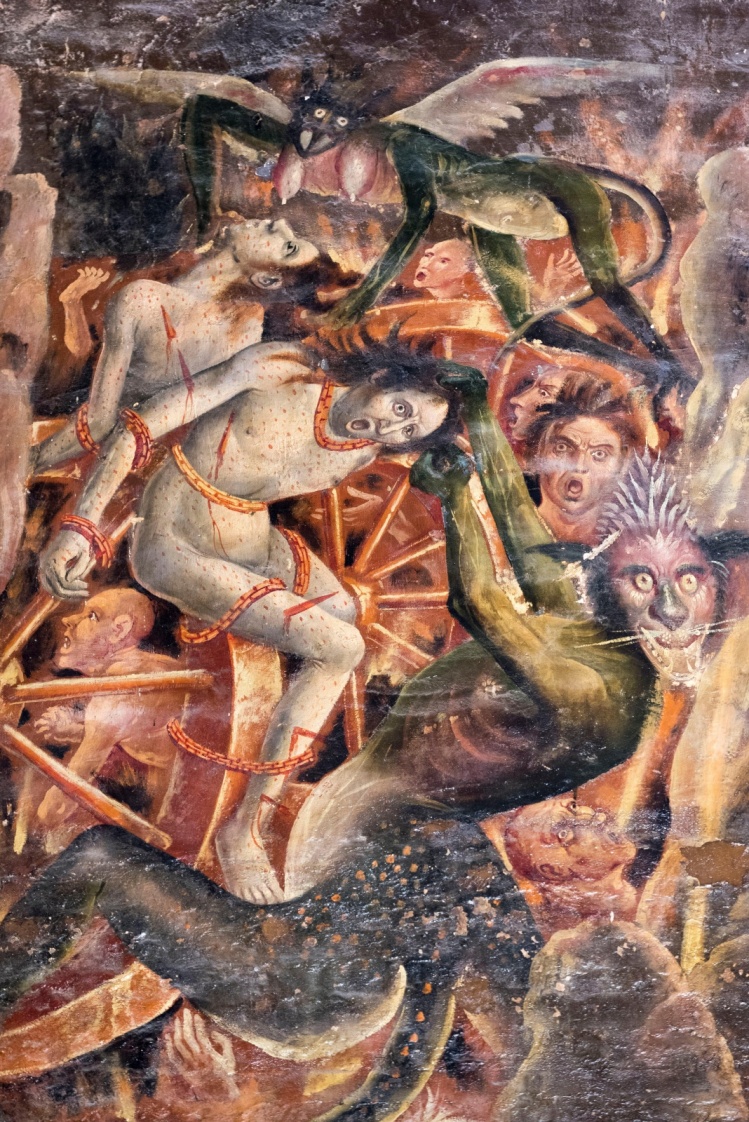 The Basilique Cathédrale Sainte-Cécile d’Albi is a terrifying place, even before you get to the Doom painting. Situated in the otherwise charmingly quaint medieval town of Albi, about fifty miles east of Toulouse, the cathedral is something of an aesthetic slap in the face—an eight-cylinder engine dropped in the middle of a Playmobil set. This is partly due to its size. Despite being more than five hundred years old, Albi Cathedral remains to this day quite possibly the largest brick building in the world, nearly 260 feet tall and 115 feet wide and holding the largest Gothic nave in the whole of France. It’s an intimidating presence.

Its history doesn’t help either. Built between 1282 and 1480, it stands as a grim monument to the butchery that was the Albigensian Crusade, the merciless persecution of the Cathar heresy (named for the large number of Cathars who resided in Albi) by Pope Innocent III in the twelfth century. The war left bloody scars across southern France—most notably in the siege of Béziers, where nearly twenty thousand people were killed—and all but extinguished Catharism in France. Albi Cathedral itself was built partly at the instigation of Bernard de Castanet, inquisitor of the Languedoc, as a testimony to the church’s dominance. This explains its brutal, warlike design. Stephen O’Shea, in The Perfect Heresy, describes it as the architectural equivalent of a “bellow,” echoing down over seven hundred years, still quite audible today.

And then, of course, there’s the Doom painting. Situated below the organ, the fresco, once at least two hundred meters square, reveals all too clearly what was on the minds of those who built this great monument to institutional power. It depicts the Last Judgment, the coming of Christ in glory to judge the living and the dead—and judge he does. True, there is salvation and joy, but it’s distant and inaccessible, way up in the heights of the cathedral. What’s really on show here, of course, is what the poor viewer can see at ground level. Hell is depicted in all its fiery glory: miserable sinners are tormented by ghoulish contraptions, while demons pull and tear. It’s almost funny in its dreadful cartoon style, but it’s also completely terrifying.

When we think of hell now, it tends to be in a rather abstract or historical sense. Hell as a physical place is largely relegated to the realm of fundamentalist sects—a threat printed on a sign by the Westboro Baptist Church. It is ripe for parody (one is reminded of Cold Comfort Farm’s Amos Starkadder declaring to the Church of the Quivering Brethren, “There is no butter in Hell!”) but of limited theological weight in the present age. At any rate, there’s little mention of hell in most Catholic churches today. Last year it was widely reported that Pope Francis had expressed doubt about the very existence of hell (Vatican officials quickly denied this). Many Christians seem willing to accept an abstract conception of hell—of being without God, of rejecting love and happiness. But as the Albigensian Doom painting clearly shows, this wasn’t always the way most Christians thought of hell. It’s fair to say that for most of the church’s history, most believers understood hell to be not just a condition but a place threatening all too physical pains.

The exact details remained pretty sketchy. The nature, location, and contents of hell all varied significantly across different periods and religions. Most people would place hell somewhere below their feet, but this wasn’t always a given. In 1729, Tobias Swinden, in his memorably titled An enquiry into the nature and place of hell, placed it in the middle of the sun, since this was the hottest and most remote place that could be imagined. Hell, it seems, is full of surprises.

Who knew that reading about torture by “sword-leaf tree” could be such good fun?
sharetweet

Nowhere is this made clearer than in Marq de Villiers’s new book Hell and Damnation: A Sinner’s Guide to Eternal Torment. He discusses in meticulous detail everything that one could plausibly wish to know about hell, and quite a lot one couldn’t. De Villiers opens with a brief discussion of where the idea of hell originated, but quickly plunges into the real business of Dis, replete with fire, brimstone, boiling oil, chains, bodily effluent, and, if you’re unlucky enough to end up in the Zoroastrian hell, hedgehogs inserted into some very undesirable places. The senior management team is also discussed, who does what to whom, and when. It turns out some hells have much better management hierarchies than others. While the Hindu hell is “largely self-governed,” in the Roman underworld you are neatly allocated to the proper region, and in the Chinese Buddhist hell there’s even a registrar to file your paperwork, though you can expect to wait in line for a very, very long time.

De Villiers also provides a deeply entertaining compendium of “eyewitness accounts,” and it’s here that the impressive scope of his research shines through. While the expected cast of Dante, Apollo, and Hercules are all present and correct, de Villiers also introduces us to a magnificent range of lesser-known hellgoers, often as weird and wonderful as the hells they visit. We journey with Governor Kwoh, the seventeenth-century governor of the Sichuan province, on his personal tour of all ten circles of Buddhist hell (tea included), and enjoy a merry romp through the bloody, divine intrigue of The Epic of Gilgamesh. We even make a brief detour to heaven, which, it turns out, is rather dull as far as descriptions go, and, as de Villiers suggests, displays a certain “poverty of invention,” especially compared to the lurid depictions of hell.

There is certainly much to enjoy in this book. Despite being relatively short, it is impressively researched, making a conscious effort to discuss not only Christian ideas of hell, but also Muslim, Buddhist, Hindu, and Classical depictions. Attention is also paid to the near absence of hell in some religions, most notably Judaism. The prose itself is sparkling and light, bouncing ably through continents and centuries. De Villiers is also a very funny tour guide, and his wry, sardonic quips certainly make for an entertaining read. Who knew that reading about torture by “sword-leaf tree” could be such good fun?

Still, one might reasonably hope for something more than good fun in a book about hell; if so, one will likely be disappointed by Hell and Damnation. De Villiers is certainly successful in cramming in a dizzying range of hellish ideas and interpretations, but he moves at such a breakneck speed that you’ve barely covered one topic before being whisked away to the next. This severely limits the depth of analysis. It is fascinating to be reminded, for example, just how lavish the Book of Revelation’s description of heaven is, but De Villiers neatly sidesteps even a cursory discussion of the rich theology and instead rushes on to Judaism. Admittedly, the theology of Revelation doesn’t lend itself to succinct summarization, but it is strange to be given so many descriptions and yet be told virtually nothing about what they might mean. As we proceed through an endless battery of texts, the book starts to feel like a compendium of (surprisingly anachronistic) translations rather than a thorough discussion of hell. Entertaining, yes, but also intellectually unsatisfying.

Even the epilogue, where De Villiers attempts a more discursive style, raises more problems than it solves. It tries to cover far too many issues in too little time, dealing not only with the modern concept of hell, but also attempting a discussion of theodicies and even arguments for the existence of God. These issues are relevant, of course, but it’s a pity they’ve all been shoehorned into the last few pages rather than integrated in the main body of the book. Trying to distill the entire history of theodicies into two pages of bullet points feels, well, just a bit silly. Here the author reminds one of a student racing against the clock to cram a few extra points into a half-baked exam essay. The epilogue also shifts the tone from healthily irreverent and skeptical to aggressively anti-religious. By the end, De Villiers seems determined to prove that all religious faith is irrational, not just a belief in hell. He blithely dismisses grossly simplified arguments for the existence of God (the entire argument from design gets barely a paragraph). After the sweeping scope of historical and theological research on display in the rest of the book, the epilogue feels like a real letdown.

Still, there’s a lot to enjoy here. Hell and Damnation is entertaining, broad, and engrossing. Despite De Villiers’s rather crude religion-bashing, he ends on a salient point. Historical evidence, from the misery of the Albigensian Crusade to the horrors of the Holocaust, suggests that humanity is capable of wreaking just as much torment as any demon or vengeful deity. Pope Francis has said that “hell is wanting to be distant from God’s love.” If this is true, hell is surely more to be seen in the actions of the Albigensian inquisitors—as far removed from the love of God as it is possible to be—than in the didactically horrifying Doom painting they commissioned.

Published in the May 3, 2019 issue:
View Contents
Tags
Death and Dying
Ethics
Theology

The View from Dover