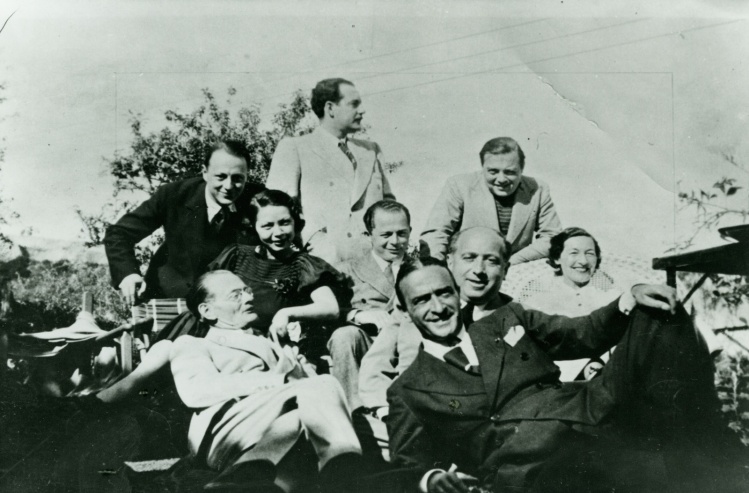 Writers have to begin somewhere. In search of characters, dialogue, and color for their canvas, many start as reporters. Working on deadline teaches you to create clean, tight sentences, but mostly it prepares you for the blank page. Ernest Hemingway, Joan Didion, Raymond Chandler, Charles Dickens, Mark Twain, Gay Talese, Nora Ephron, and hundreds of others cut their writing teeth as journalists, learning to bite before they would chew.

Add to the list Billy Wilder, the celebrated film director and screenwriter of classics like Sunset Boulevard and Some Like It Hot. With his new collection, Billy Wilder on Assignment: Dispatches from Weimar Berlin and Interwar Vienna, film scholar Noah Isenberg offers the first English translation of dozens of Wilder’s newspaper and magazine articles, mostly from the mid-to-late 1920s. Isenberg’s collection is as close to a diary as we’re going to get from one of the greatest filmmakers of all time. Though the stories mostly stand up on their own, Wilder fans will see the humor, wordplay, and descriptive powers that would come to characterize his films, not to mention the characters that would populate them. Reading these stories is like glimpsing the percolating brain of the genius to come.

But before dropping us into Billy’s head, Isenberg gives us some background. Wilder’s mother, Eugenia, had lived as a girl on Manhattan’s Upper East Side for several years with an uncle who was a jeweler. She came to love New York and begged her parents to let her stay. But she returned to Galicia, got married, and had her own children. She named them after Buffalo Bill, the Wild West showman she had seen during his tour of the city: Willie, her firstborn, and Samuel, her second, nicknamed Billie. Though his Jewish father—a waiter and later a train-station café owner—wanted him to become a lawyer, Billie had other ideas. He gambled in pool rooms and often stole tips from his father’s tables. After high school, and after seeing a rash of American films with cool characters in raincoats and with press passes stuck in their hat brims, he decided to become a newspaperman. Living in Vienna with his family, the tall, redheaded eighteen-year-old asked the editors of the local tabloid, Die Buhne, for work as a foreign correspondent, with hopes of following in his mother’s footsteps and moving to America. But Wilder didn’t speak English. He visited the newspaper offices anyway, and according to later accounts, walked in on the chief theater critic having sex with his secretary—an encounter that would rattle around in his fedoraed head for decades and work its way into movies like The Apartment and The Major and the Minor.

By 1925, young Billie was creating crossword puzzles for Die Buhne’s sister paper, Die Stunde, working his way up to interviews and reviews of cafés where patrons were “bent over newspapers as big as bed sheets.” Each morning, his mother, Eugenia, would wake him and say, “Get up and write some anecdotes.” Wilder would interview celebrities, the families of murder victims, and an all-female dance group called the Tiller Girls, who, with their leader/chaperone, Miss Harley, would be the models for Sweet Sue and Her Society Syncopators in 1959’s Some Like It Hot.

In the spring of 1926, the American orchestra leader, Paul Whiteman, visited Vienna. Wilder, whose only English came from song lyrics, interviewed Whiteman, fearlessly describing his double chin and his mustache, to which he dedicated a whole paragraph:

It is cut quite short and twirled up in the middle, the two ends extend out quite far, and points upwards toward his nostrils at a sharp angle; the tips have a bit of pomade, which adds an aromatic element to our visual pleasure. That is the mustache of the future. Copyright by Paul Whiteman.

Struggling to find work, he slept in train stations and cut his cigarettes in half to make them last longer.
sharetweet

Whiteman invited the kid to Berlin to follow his band. Though Isenberg glosses over it, trouble was brewing for Wilder in Vienna. Die Stunde was in the midst of a newspaper scandal, its editors in cahoots with the advertising department, accused of shaking down café owners. Wilder had gotten kickbacks for his positive café reviews, one of which is included here. It is by far the weakest of all his stories. “And the specialty coffee!” he writes, probably laughing the whole time. “Praise be to the cook, praise to her heartwarming approach.... I have found my favorite café.”

Die Stunde would soon be kaput and Wilder’s reputation in Vienna likely tarnished. He went to Berlin and stayed there. The city, Europe’s most modern metropolis, was a revelation. Struggling to find work, he slept in train stations and cut his cigarettes in half to make them last longer. He found a small apartment, but couldn’t keep up on his rent, and had no heat. In two separate stories, he talks about his fingers turning blue. He spent most of his days at the sprawling Romanisches Café with Berlin’s other broke, hungry artists. To feed himself, he took a job as a hired dancer for two months, twirling old married women on the dance floor of the Eden Hotel while their husbands studied “the prices on the wine list through their monocles.” It provided his best material yet. Hunger sharpened his senses. His descriptions of his partners are colorful and cruel: “An older lady in a bottle-green dress with a long neck and hair the color of egg yolks; and a little lady, whose reddish snub nose is trying too hard to look uppity.” Wilder dances to exhaustion and one night, asleep at home in his tuxedo, has a haunting but hilarious dream that a man has come to collect on back rent. Instead of garnishing his wages, he garnishes Wilder’s knees. When Wilder tries to chase the man, he falls, naturally, because he has no knees.

The dance-gigolo series caused a splash and got him more work. There were the ironic travel pieces about Italy, for which he visited Christopher Columbus’s boyhood home in Genoa only to find it closed for the season, in addition to taking a disappointing ride in a gondola, trying to get a glimpse of Venice through the icy fog. In a piece about Berlin’s favorite meeting spots, he describes the oversized clock at the Berlin Zoo train station. A Swiss clown, a pay-for-hire witch, Berlin’s oldest woman, and a long list of other characters were featured under his byline in the city’s many papers and magazines.

His interview with Cornelius Vanderbilt Jr. would add depth to his version of Linus Larrabee in Sabrina—a workaholic millionaire with bad teeth and no time for fun. His meeting with the Prince of Wales would end up as a passing reference in his 1974 remake of The Front Page. And his story on tennis player/author Claude Anet would one day result in 1957’s Love in the Afternoon, based on Anet’s book, Ariane, Young Russian Girl. But it was his profile on Erich von Stroheim, with a mention of Gloria Swanson, that would sow the seeds for perhaps his greatest achievement, Sunset Boulevard, which paired the now-retired director with the washed-up silent-film star more than two decades later, in 1950.

The last section of the book is dedicated to Wilder’s many film reviews, in which he analyzes the intricacies of plot and acting in preparation for his next career move. As his writing evolved, and his connections at the Romanisches grew, Wilder started to move into the world of silent film, ghostwriting fifty screenplays. To repay his poker debt to Universal’s Joe Pasternak, he was given his first screen-credited gig, The Daredevil Reporter, in 1929. He even gave himself a cameo as—yes—a reporter. The movie bombed at the box office, but his firsthand knowledge of reporters would inspire Kirk Douglas’s character in 1951’s Ace in the Hole.

His next film in Berlin, People on Sunday, which he wrote on napkins at the Romanisches, involved a documentary-style plot that follows five young people on their day off. In one scene, a couple meets below the oversized clock at the Berlin Zoo train station. The silent, low-budget People on Sunday presented a distilled portrait of life in the city and was a smash hit. In two separate pieces here he describes how that 1930 film came about. “No stunts, no clever punchlines.... The five people in this film, that’s you and me.” The triumph led to work in Berlin’s UFA studios, the largest outside Hollywood. But things in Germany were changing for the worse. Wilder would read Mein Kampf and watch the Reichstag burn, deciding in 1933 that it was time to leave. He moved to Paris first, but eventually made his way to New York and then to Hollywood, where he changed the spelling of his name to Billy. Billie was for girls.

On his Atlantic crossing, he pored over several American novels, including A Farewell to Arms and Look Homeward, Angel, to learn English. But the stories he wrote in German in his teens and early twenties not only serve as a portrait of the artist as a young Berliner, but also leave a snapshot of a world that would soon disappear. In 1935, he headed back to Vienna to try to convince Eugenia to come with him, to renew her love affair with America. But she refused. After her disappearance in the Holocaust, he would shoot on location in her old Upper East Side neighborhood for both The Lost Weekend and The Seven Year Itch. Family, friends, and many of the places he had known and loved would be destroyed in World War II. Wilder shot his beloved Berlin from the air for his 1948 film, A Foreign Affair—the buildings reduced to rubble, but the anecdotes still very much alive.