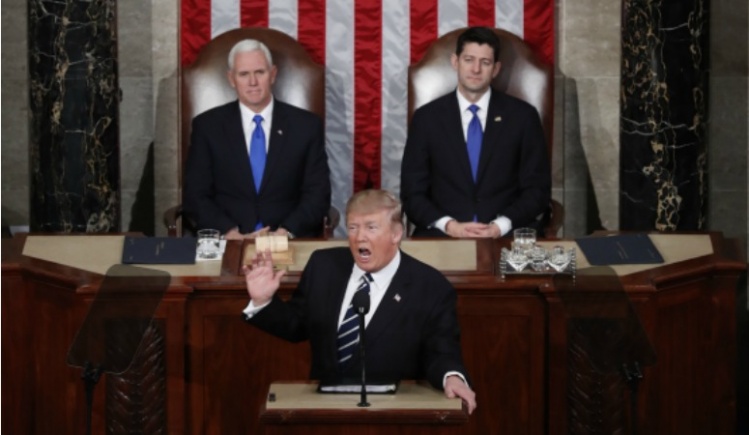 The obsession with Donald Trump's ability to spend one hour in a disciplined relationship with a teleprompter obscured one of his central goals on Tuesday night: He continued to try to scare the country to death.

Yes, he lived up to media expectations that he would finally attempt to look "presidential" and that he could recite words that sounded optimistic and forward-looking. He and his handlers are well aware that commentators typically reward presidents for doing what commentators say presidents need to do.

And he also issued a ritual call for bipartisanship, even though earlier in the day, he had said he regarded House Democratic leader Nancy Pelosi as "incompetent, actually." Put aside that upbraiding his female critics is one habit that is very difficult for Trump to break. It was hard to square the nice, let's-all-get-along paragraphs with everything else Trump has been doing.

And beneath the obeisance to the Beltway rules about what addresses to joint sessions of Congress are supposed to look like lurked Trump Classic. He's still the man who wants to aggrandize the executive and expand the power of law enforcement by making the country believe it is under threat from dark forces that only a strong hand can deal with.

He didn't repeat his controversial use of the word "carnage," which stood out from almost everything else he said in his inaugural address. He simply described the carnage.

"We've defended the borders of other nations while leaving our own borders wide open for anyone to cross, and for drugs to pour in at a now unprecedented rate," he declared. Actually, we don't have "wide open" borders and President Obama found himself under criticism from members of his own base for being too tough in enforcing immigration laws. But for Trump, only "the construction of a great, great wall along our southern border" will solve the problem.

Trump could not resist adding that extra "great," verbal cover for the fact that he left out his fanciful claim that Mexico would pay for his wall.

Trump boasted that "we are removing gang members, drug dealers and criminals that threaten our communities and prey on our very innocent citizens," which, in truth, is what our forces of order have been doing for years. "Bad ones are going out as I speak." Don't you feel better already?

Trump always seeks protection from a regiment of straw men and women, and this speech was no exception. "To any in Congress who do not believe we should enforce our laws, I would ask you this one question: What would you say to the American family that loses their jobs, their income or their loved one because America refused to uphold its laws and defend its borders?"

Well, I suppose in Trump world, a desire not to deport every single one of the 11 million men and women who are in the United States without proper documentation constitutes not believing in enforcing the law. But this unfounded attack fit badly with the suddenly bipartisan Trump.

And his call to create an office in the Department of Homeland Security called VOICE ("Victims of Immigration Crime Engagement") was a demagogic propaganda effort to suggest that immigrants are especially prone to committing acts of violence when, in fact, they are not.

No Trump speech is complete without a reference to Chicago's murder rate, which he refers to constantly because the national crime statistics don't bear out his implication that the nation is more unsafe than ever.

And Trump wants Americans to be very, very afraid of the threat of terrorism by way of rationalizing his unjustifiable policies barring refugees from a selected group of Muslim countries. "We cannot allow a beachhead of terrorism to form inside of America," he declared. For good measure, he added: "We cannot allow our nation to become a sanctuary for extremists." I bet his speechwriters were proud of those scary phrases, "a beachhead of terrorism" and "a sanctuary for extremists." That's the way to get people really alarmed.

Perhaps because I watched this address a long way from Washington, I was less responsive to Trump's efforts to place himself, rhetorically at least, within the Capitol's conventions. What I saw was not a New Trump but a shrewd Trump apparatus throwing some bones of optimism to establishmentarians hankering to get on board. I suspect members of Trump's base were wiser than this. They heard the music of fright, dread and chaos, and they knew that was still the point.