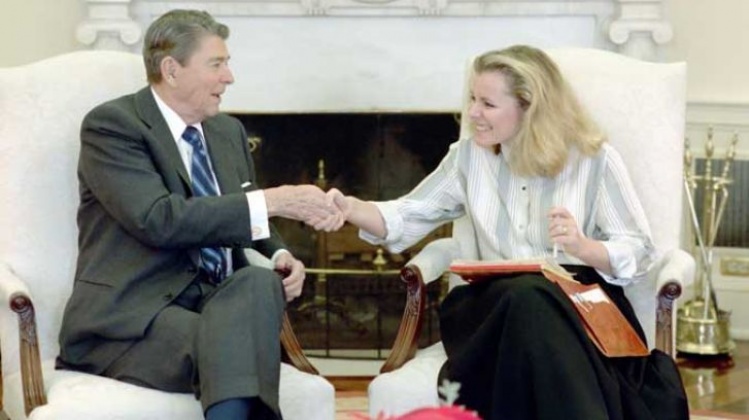 Since Barack Obama first ran for president, conservatives have often complained of feeling unable to criticize him without being accused of racism. Obviously not all criticism of Obama is racially motivated. But a lot of it has been, plainly and shamelessly so, and that fact is important to recall as we enter a new presidential campaign marked by overt appeals to racial suspicion and resentment. I came across a pungent reminder while reading Peggy Noonan’s new book, The Time of Our Lives, which collects her favorite commentary from her column in the Wall Street Journal and elsewhere.

Noonan is not known for provocative outbursts; she tends rather to airy analysis and vague policy prescriptions, padded with much prim clucking over the coarsening of American culture. Fans will find this book thick with Noonan hallmarks: her cloying meringue style (“When big, serious, thoughtful things must be said, then big, serious, thoughtful speeches must be given”); her over-the-top worship of our fortieth president (“Ronald Reagan told the truth to a world made weary by lies”); her reliance on the imagined thoughts and feelings of imaginary “normal people.”

But “The View from Gate 14,” a Journal column from April 2008, is something special. She begins with grumbling about airport security in the post-9/11 world, and in particular the way aggressive security screening “reduces the status of that ancestral arbiter and leader of society, the middle-aged woman.” Pat-downs for thee, but not for me! “In the new fairness,” Noonan writes—and this is a complaint—middle-aged women are “treated like everyone else, without respect, like the loud ruffian and the vulgar girl on the phone.”

Noonan had explicitly advocated racial profiling in other post-9/11 columns, but this one appeals more to class than race—until, having made it through security, Noonan finds herself musing on the challenges facing Barack Obama, then a candidate for the Democratic Party’s nomination. “He has been tagged as a snooty lefty,” she writes,

the candidate who loves America because of the great progress it has made in racial fairness. Fine, good. But has he ever gotten misty-eyed over…the Wright Brothers and what kind of country allowed them to go off on their own and change everything? How about D-Day, or George Washington, or Henry Ford...

Why should Obama’s feelings about D-Day or the Wright Brothers be suspect, and why must they be interrogated to judge his patriotism when his pride in the country’s civil-rights legacy is, as Noonan has said, well known? Her implication is that Obama’s “snooty” love of “racial fairness” makes him less likely to value the things that not-so-snooty righties hold dear—the things that are truly “American.”

Noonan keeps digging: Republican candidate John McCain, she says, carries his love for America “in his bones.” He learned it “literally, at grandpa’s knee.” If Noonan somehow managed to miss Obama’s breakout convention speech in 2004, in which he talked of how his grandfather enlisted after Pearl Harbor and served in “Patton’s army,” she might have read about it in Dreams from My Father, his best-selling book. Obama shouldn’t have had to demonstrate his emotional or familial connection to white American greatness, but he had by then, many times over. Yet Noonan goes on: "But what about Obama and America? Who would have taught him to love it, and what did he learn was loveable, and what does he think about it all?"

Noonan never insinuates, as many did and do, that Obama was not born an American or has hidden the truth about his background. Her suspicion rests on the distinction she makes between the black American experience and the full American experience. “No one is questioning his patriotism,” she insists, “they’re questioning its content, its fullness.” In other words, is it white enough?

Compared to some of the ugly things that have been said about Obama, Noonan’s not our kind, dear column may seem tame. (News anchor Brian Williams praised the same column as “a sparkling piece of journalism” worthy of the Pulitzer Prize, and Washington Post columnist Kathleen Parker, who wrote a very similar column about Obama’s “bloodlines” in 2008, went on to win the Pulitzer in 2010.) But in its genteel way, a line like “Who would have taught him to love it?” is as frankly racist as any birther conspiracy theory. And yet, in 2015, “The View from Gate 14” was published again, selected by Noonan for a collection of her best work.

The hateful rhetoric of the 2016 Republican campaign for president has been appalling—and it’s only February! But it didn’t come out of nowhere. And conservatives who resent accusations of racism would do well to consider how their candidates learned to love it.