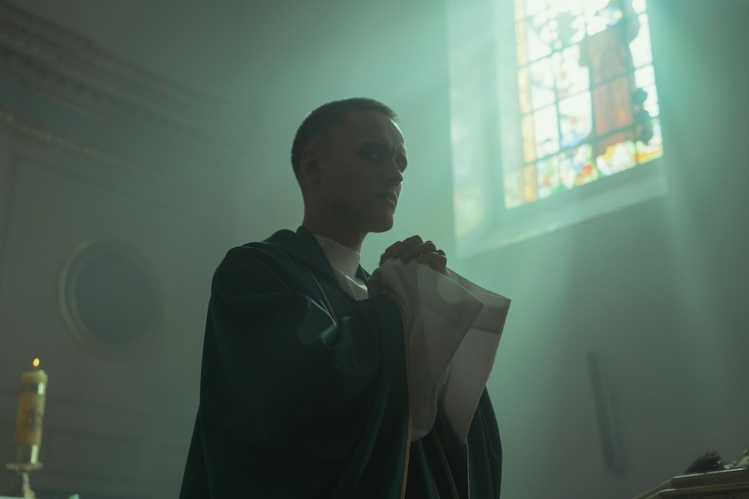 Nominated for Best International Film at this year’s Oscars, Corpus Christi is the work of the young Polish director Jan Komasa. Though its setting is the Poland of today, in some ways it could be the nineteenth-century American frontier, where isolated towns served as a refuge for charlatans and con men of all types—scoundrels who could outrun their misdeeds and start anew, with little more than their ability to sell, flatter, or persuade.

Or, in this case, to preach. Corpus Christi’s opening scenes transpire in a juvenile-detention center, where Daniel (the luminous young actor Bartosz Bielenia) is nearing the end of a sentence for an unspecified malfeasance. From the start Komasa keys us into Daniel’s moral ambiguity—showing us his passive acquiescence in the beating of a fellow prisoner, then cutting to his careful tending of the makeshift altar at a prison church-group meeting, where Daniel finds both solace and special favor with the prison priest, Fr. Tomasz.

Whatever Daniel’s crime—and it will only be revealed near the movie’s end—it’s clear that this young man has an ample spiritual side. Where other inmates chortle over Fr. Tomasz’s spiritual guidance, Daniel embraces it, accepting the priest’s message with what appears to be devout earnestness. “We’re here to remember something important,” Fr. Tomasz says. “Each of us is the priest of Christ. Me, you, each and every one of you.”

Daniel ends up taking this message literally. After his release, he joins old friends for a night of drugs, dancing, and sex; waking the next morning from this debauched spree, he jokingly dons a cleric’s collar he has stolen from somewhere, as his pals chant a raucous “St. Daniel!” In truth there’s nothing Daniel would like more than to attend seminary, but his criminal record rules that out. And he isn’t ready to comply with the terms of his parole. Sent to a work program for recently incarcerated juveniles at a remote rural sawmill, he takes one look at its dreary, laborious isolation and hightails it out of there, following the sound of distant church bells to a nearby village church.

When a teenage girl in the nearly empty church pegs him as a runaway from the sawmill, Daniel fends off her snarky condescension with an impulsive lie. “I’m a priest,” he says. “Well, then I’m a nun,” the girl retorts. Challenged to show his clerical collar, Daniel reaches into his bag and produces the one he filched. All too soon he finds himself being introduced to the parish priest. As it happens, the priest is ill and in need of medical help; and so, by a series of happenstance events, our young ex-con—“Fr. Tomasz,” he calls himself—is thrust into the role of fill-in village pastor.

Masquerade and mistaken identity have served up comic gems from Shakespeare’s Twelfth Night to Being There and The Big Lebowski, and at times Corpus Christi seems to veer toward comedy—as when Daniel, having recklessly declared himself a priest, finds himself taken to the sacristy to change out of his civilian clothes, and tries in desperation to escape out a window. (It is locked.) Later, forced to hear confession, he sits terrified in the confessional—while consulting a “Guide to Confession” on his smartphone. But Komasa steers every such moment back toward seriousness, and what the film mostly offers is a vicarious sense of being an impostor; much of Corpus Christi resembles those bad dreams in which you are thrust into a situation for which you are unqualified. What if you had to pretend to be a figure of public authority, and everything depended on pulling it off? Nervously, we watch Daniel desperately boning up on Scripture the night before having to lead his first Mass, biting his nails and chain smoking.

In the event, desperation proves the mother of liturgical invention. Bailing out of a Mass he doesn’t fully know how to perform anyway, Daniel delivers an impromptu homily on one’s personal relationship to Jesus and to salvation. “It’s like this,” he tells the congregation. “We come to church. We look at him. Jesus, how can I imitate you? You are so pure, while I bring all this dirt with me. How am I supposed to act on your behalf, if I can’t manage my own life?” His simple sermon, with its confession of personal failing—summoned from his own, jagged experiences—moves the parishioners, whom he urges to “go and pray…from the bottom of your heart.” By the time he tops it off by singing “The Lord Is My Shepherd,” the congregation is in love with him, and palpably eager to accept him as their priest.

As it turns out, Daniel has a knack for it, especially for sensing the pain of others and summoning novel means of helping them. The villagers carry a burden of grief and recrimination—it has to do with a shrine outside the church, where photos of six young people are posted—and badly need consolation. As “Fr. Tomasz” gains confidence, his sermons grow bolder: seizing the village’s rage at the loss of six young people and aiming it at God, and offering a frank admission—even elevation—of spiritual doubt.

Daniel’s own doubt and anger serve as proxy and incitement alike, both alarming and thrilling the villagers, even as he injects a measure of joy into their religious practice (baptizing a baby, he throws handfuls of baptismal water high in the air and lets it cascade down). Improvising, borrowing from group-therapy techniques used in prison—including, at one point, a group primal scream—he points the village’s adults toward novel spiritual practices, while titillating the young with heterodox views. “You know,” he says to a group of giggling teens who question him about temptation, “celibacy is pointless. God had a kid, and no one bothers him.”

Corpus Christi represents a startling advance over Komasa’s previous effort, Warsaw 44, a gruesome account of the Warsaw uprising full of seemingly random changes in texture, tone, and camera work. As deliberate and focused as that earlier film was hectic and uneven, Corpus Christi involves us in a taut drama of sin, forgiveness, and mercy. Its tension grows as doubts about “Fr. Tomasz” creep in, and events threaten to lay bare Daniel’s charade. Komasa uses these events not merely to heighten suspense, but to lay out ironies and paradoxes, exploring how fraudulence can belie a deeper authenticity.

Moving toward its close, Corpus Christi follows parallel narratives, in which the congregation is absolved of its anger, pain, and sin, while Daniel undergoes humiliation and torment. Switching between the story lines, Komasa follows Daniel and his parishioners in starkly divergent directions, suggesting a zero-sum economy of redemption and sacrifice—healing on the one hand, cued by a subtle nod of mercy; and on the other, an image (I won’t reveal the details) worthy of Edvard Munch, a face caught in a rictus of dread and pain.

The power of Corpus Christi is inseparable from the particular talents of Bartosz Bielenia, a near-novice actor just twenty-seven years old, who as far as I can tell has appeared in three films. From the film’s opening moments, as he gazes with rapt admiration at the prison priest, his face is both mesmerizing and mesmerized; his glassy blue eyes, gaunt cheekbones, and transparent-seeming skin evoke the young Christopher Walken, his skeletal visage surrounded by a penumbra of ecstasy tinged faintly with horror.

What makes the film’s Christ comparison palatable is that Komasa isn’t coy about it—at one point showing us the ersatz priest at the altar, disrobing and stretching his arms out in crucifixion pose. The juxtaposition of priestly suffering and parishioner redemption comes off not as authorial manipulation, but as a highly suggestive metaphor won through sympathetic human storytelling, and makes the film’s denouement at once cathartic and awful.

Corpus Christi gives parish Catholicism a jolt of Protestant spiritual energy, the interventions of “Fr. Tomasz” superimposing charismatic practices on the stolid Catholicism of rural Central European life. The effect is to reaffirm Christ’s message—a revolution of love, delivered by a criminal-cum-priest, unexpectedly and movingly embodying the lesson of Scripture: “For he who is least among you all is the one who is great.”

From Muckraking to Clickbait