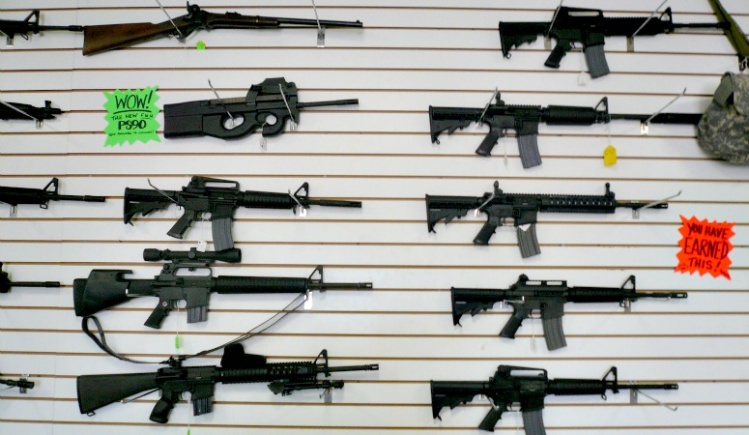 In early October a troubled twenty-six-year-old, armed with five handguns and a rifle, opened fire at his community college in Roseburg, Oregon, killing nine people and wounding seven. Back at his apartment investigators found two pistols, four rifles, and a shotgun. In late November a man armed with an assault rifle killed three people and wounded nine at a Planned Parenthood clinic in Colorado Springs. Less than a week later, a young married couple armed with two assault rifles and two semiautomatic handguns killed fourteen people and wounded twenty-one others at a holiday party in San Bernardino, California.

The motives and circumstances of these shootings had little in common. The Oregon gunman appears to have been motivated at least partly by a hatred of organized religion, while the shooters in California had declared themselves Islamic warriors. In his first court appearance, the Planned Parenthood shooter proclaimed himself  “a warrior for the babies.” But as the media continues to debate which of these events should be treated as terrorism and which as acts of insanity, we should not lose sight of what we know the three shootings did have in common: they all involved semi-automatic weapons purchased legally—and would have been far less deadly without them.

As critics of gun control are eager to point out, we cannot know for certain whether a ban on the civilian ownership of such weapons or a law mandating universal background checks would have prevented any of these particular atrocities. It is at least possible that the shooters would have found a way to buy the same weapons on the black market: there are, after all, a lot of guns floating around in this country; indeed, there are now more guns in America than Americans. But we do know that mass shootings are much less common in countries that make it harder to acquire firearms. That isn’t a coincidence. More generally, other developed countries with fewer guns and tighter gun-control laws have much lower rates of both homicide and suicide. Likewise, studies have shown that, here in America, states and municipalities with more gun restrictions have fewer gun-related deaths. Some might argue that what’s good for society collectively is nevertheless bad for individuals who wish to protect themselves and their families, but studies have also shown that people who live in households with guns are less safe overall than those who live in households without them. In short, the politics of gun control may be complicated, but the epidemiology is surprisingly simple: all other things being equal, more guns mean more bloodshed.

This being the case, why are the politics still so complicated—even after Sandy Hook, and Aurora, and San Bernardino? The death tolls still shock, but so far they have failed to alarm the country into action. At this point it may be fair to assume that anyone unpersuaded by the mountain of evidence that gun control works is probably unpersuadable. Fortunately, we don’t need to convince all the holdouts, since a large majority of Americans already favor common-sense gun laws. A recent study published in Preventive Medicine found that more than 80 percent of the public, including gun owners, are in favor of background checks for all gun sales (there are currently exceptions for gun shows and private sellers). About 60 percent are in favor of laws that would ban assault weapons and large-capacity magazines. In 2013 the Chicago suburb of Highland Park passed an ordinance that does just that. On December 7 the Supreme Court declined to hear a challenge to that law. As the New York Times noted, this was the seventieth time since 2008 that the Court has declined to consider a lawsuit challenging a gun regulation. The door to further reform is wide open.

All we need now are lawmakers more responsive to public opinion than to the blandishments of gun-industry lobbyists. If the National Rifle Association is allowed to determine our gun policies, and voters merely get to choose which politicians will have the privilege of doing the NRA’s bidding, then Congress has ceased to function democratically. In their dubious interpretation of the Second Amendment, too many of our elected leaders—and all of one party—have forgotten that the Constitution was designed not only to secure the “blessings of liberty,” but also to “insure domestic tranquility,” and to “promote the general welfare.” Behind the moral outrage of a country that averages at least one mass shooting per day is a political outrage we can no longer tolerate: a Congress in thrall to profiteers who peddle what is essentially battlefield equipment to the general public. They would sell us bombs if they thought they could get away with it.