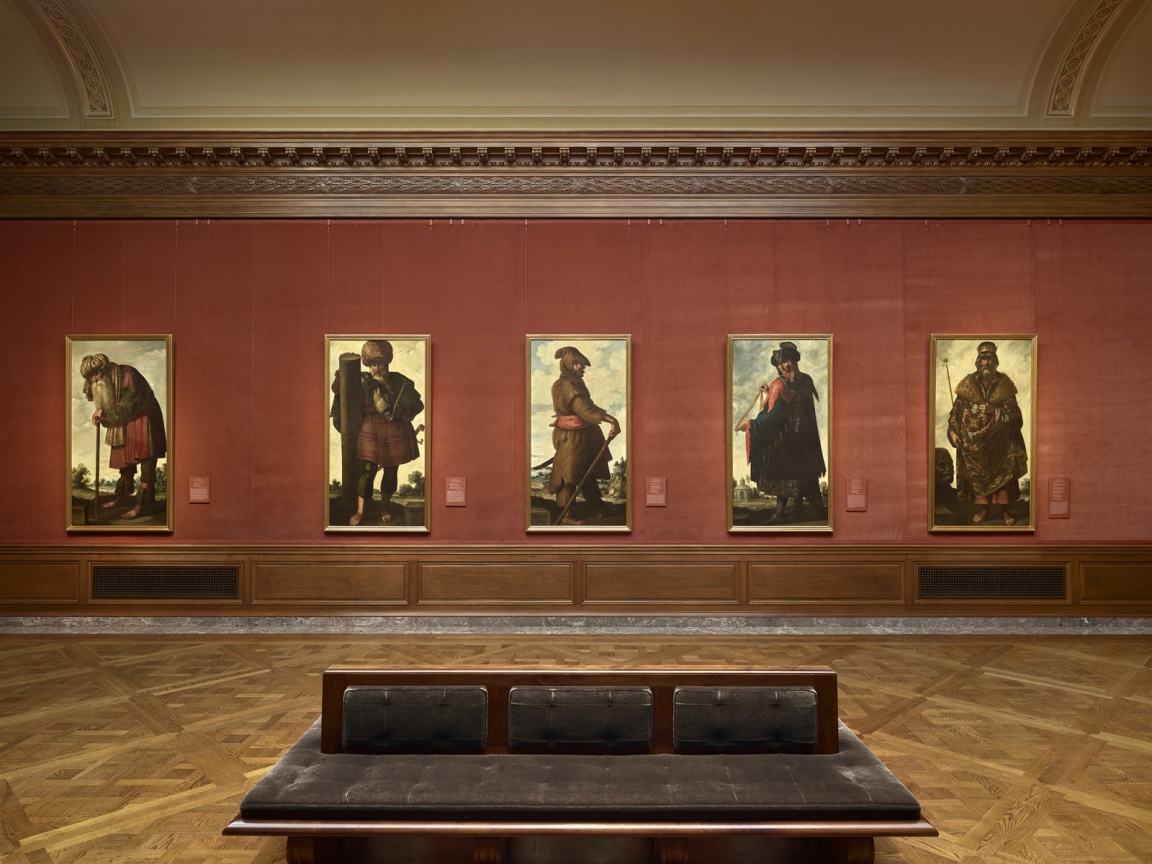 Installation view of works in the East Gallery from Zurbarán’s Jacob and His Twelve Sons: Paintings from Auckland Castle, The Frick Collection (photo: Michael Bodycomb)

None of Us Faces Judgment Alone

Zurbarán’s Jacob and His Twelve Sons: Paintings from Auckland Castle, on view at the Frick Collection in New York City, January 31, 2018 through April 22, 2018

By this point, the third Sunday in Lent, we’ve likely faced set of standard questions about our ascetic efforts thus far. What did you give up for Lent? How is your Lenten discipline going? Our answers hardly ever prove satisfactory. Either we’ve stumbled, thinking that we’ve let God down, or we’ve succeeded, believing that God is pleased with our self-denial. Because they put the emphasis on us, on what we’re doing, rather than on God and on God’s activity in our lives, these kinds of questions miss the point. Salvation leaves no room for solipsism: conversion is always a communal, collective process. Our turning to God, and our preparation for new life at Easter, either happens together, as part of a family of faith, or not at all.

A new exhibition of Spanish paintings by the Golden Age master Francisco de Zurbarán, Jacob and His Twelve Sons: Paintings from Auckland Castle, on view through April 22 at the Frick Collection in New York City, provides a refreshing reminder of this dynamic by bringing us into conversation with our religious ancestors, the Old Testament Patriarchs. This series of thirteen life-sized portraits, displayed as a kind of choreographed procession that wraps around the four walls of a single room at the Frick, depicts a subject rarely found in European religious painting: Jacob’s Blessing, which appears at the end of the Book of Genesis. In the Biblical text, Jacob’s prophetic verses, dramatically uttered on his deathbed, reveal the divergent destinies of each of his twelve sons, the legendary founders of the Twelve Tribes of Israel. Taken together, they convey both a firm sense of hope, recalling God’s promise of fecundity made to Abraham earlier in Genesis, but also an anxious sentiment of foreboding, as they point to future suffering in Exodus. 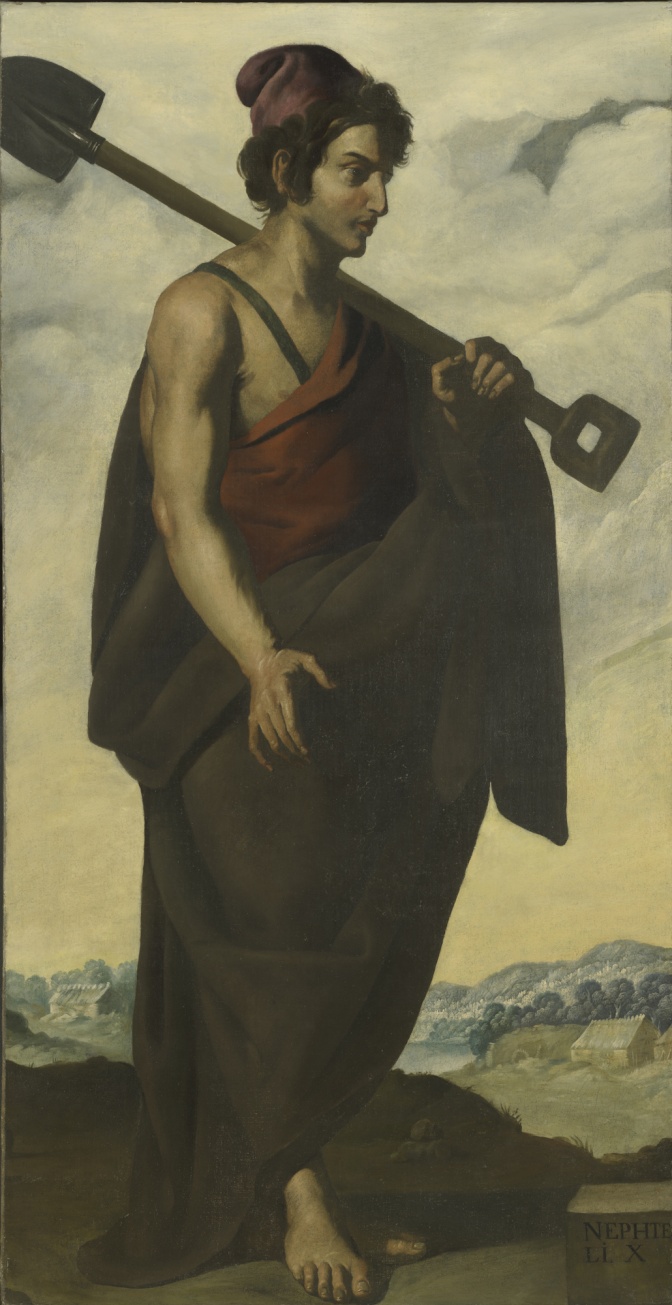 Zurbarán’s artistic virtuosity is on full display as he transforms Jacob’s poetry into a compelling visual sequence of striking costumes, delicate gestures, and complex facial expressions. Equally striking is the fact that these paintings have arrived on our shores. Likely commissioned to adorn a monastery in the New World but never exhibited in the United States until now, the portraits were produced in Seville in the early 1640s, when Zurbarán was at the height of his creative powers. Mysteriously, the completed paintings never reached their final destination, somehow vanishing from the historical record for almost a century. They only surfaced again in an English merchant’s log in 1722, before they were purchased at auction in 1756 by the Anglican Bishop Richard Trevor, a staunch proponent of legal equality for Jews. Wishing to make a powerful statement in support of Jewish rights, Trevor installed the series in the dining room of the Bishop’s Residence at Auckland Castle in County Durham, where the paintings have remained for two-hundred-and-fifty years. Freed for travel by a two-year renovation at Auckland Castle, Jacob and His Twelve Sons constitutes the first major exhibition of Zurbarán’s works to be held here in the United States in more than three decades.

Though his reputation is often obscured by the fame of his better-known contemporary Diego Velázquez, Zurbarán is hardly a stranger to American art galleries, collectively the largest repository for his works outside of Spain. Masterpieces like the hyper-realistic Still Life with Lemons, Oranges, and a Rose and the haunting Martyrdom of Saint Serapion have contributed to the popular idea of Zurbarán as the “Spanish Caravaggio,” an unabashed master of naturalistic detail and dramatic chiaroscuro technique — albeit one with a decidedly ascetic, even monastic temperament.

Almost all of Zurbarán’s works were originally commissioned by churches and religious orders, which sought grand iconographic representations of their Catholic faith during the height of the Counter-Reformation in Spain. Perhaps not surprisingly, much recent criticism has tried to distance the artist from overly spiritualizing interpretations of his paintings. Instead of sincerely depicting his own inner spiritual vision, the argument goes, Zurbarán acted instead as a canny businessman with a knack for winning commissions in the highly competitive art market of Inquisition-era Seville. The stirring, humane quality of his works thus emerges not because of but rather in spite of their overtly religious subjects. 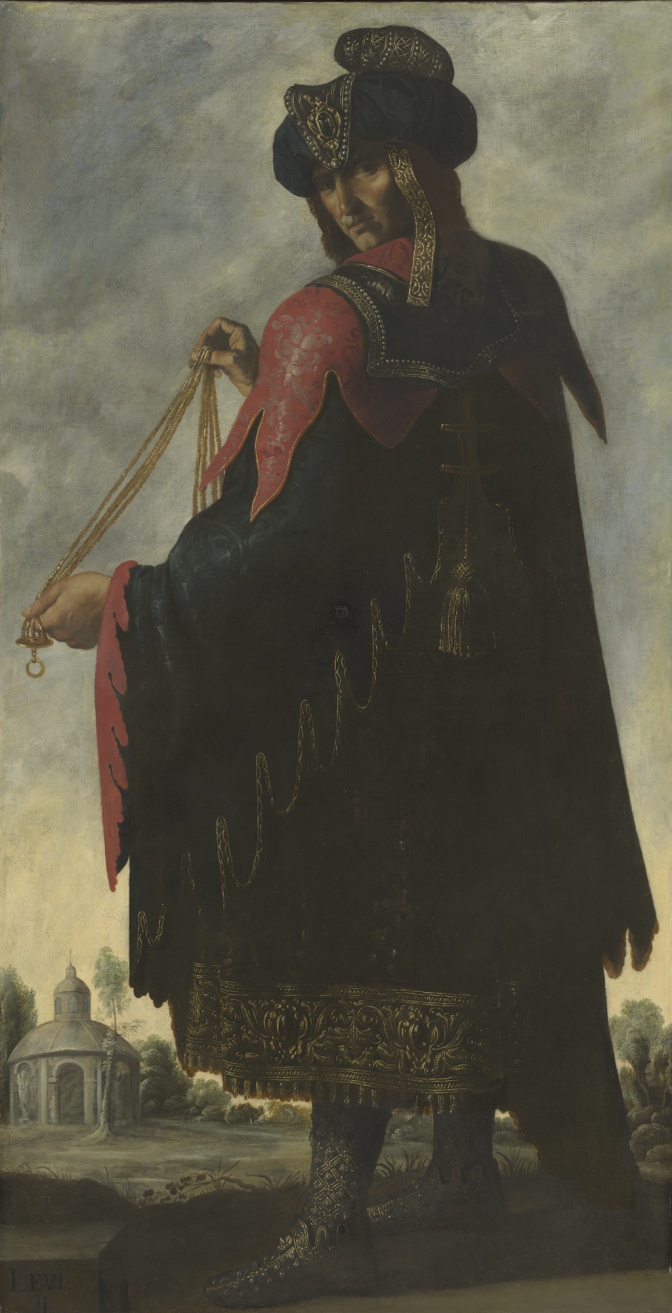 Such a view insists that Zurbarán must be either genuinely prayerful or commercially savvy, but not both. Yet we might wonder whether the artist and his contemporaries, whose Christian theology insisted that God became decisively involved in even the most mundane human affairs by becoming human Himself, would have recognized such a stark distinction between prayer and work. To the contrary, Zurbarán’s Jacob and His Twelve Sons, like its Genesis source material, reveals that both the oratory and the marketplace are charged with the sacramental grandeur of God.

Rereading Genesis in preparation for my visit to the exhibit, I was pleasantly surprised by the picaresque, almost novelistic quality of the narrative of Jacob and his sons. Like Chaucer’s Canterbury Tales or Boccaccio’s Decameron, these episodes portray a fallen human family in all of its gritty, convoluted reality. To start, Jacob disguises himself as his brother Esau in order to obtain a blessing from his father Isaac, while the twice-widowed Tamar (who later figures prominently in Matthew’s genealogy of Jesus), dressed as a prostitute, tricks Jacob’s son Judah (who is also her father-in-law twice-over) into impregnating her, thus securing her place in the family. And even though patristic exegesis would later hold up Jacob’s twelve sons as moral exemplars prefiguring the twelve apostles, the Genesis narrative explicitly reminds us that these are the same brothers who, envious of Joseph’s colorful robes, conscientiously decide to sell him into slavery in Egypt instead of just killing him outright. But what separates these stories from ordinary accounts of human depravity is the insistent, abiding presence of a loving God — one who consistently meets human sin, evident in countless betrayals and broken relationships, with ongoing fidelity, patience, and mercy.

With astounding visual economy, Zurbarán manages to compress this entire history into a single image, which consists of nothing more than a stooped figure, quietly leaning on a staff in a spare landscape. This is the portrait of Jacob, the first in the series. With his eyes downcast in a gesture of ponderous recollection, Jacob’s body language silently communicates a deep wisdom. His long white beard, flowing scarf, and crimson tunic seem to pull his entire figure to the earth, reminding us of our human frailty and mortality, the result of Adam and Eve’s fall from grace. Yet at the same time Jacob’s hands, gently cupped above the staff upon which he rests his weary frame, indicate that this same earth also offers stability and support. At the end of his life Jacob becomes a visual lesson in humility, the proper attitude of human reverence before God.

The portraits of the sons that follow offer varying responses to this fatherly example. As the images succeed each other, our eyes are immediately drawn to their painstakingly detailed clothing, through which Zurbarán communicates the essence of their personalities. Levi’s tasseled priestly robes, Judah’s fur-lined regal mantle, and Dan’s pointed turban indicate their high social status but also reveal their arrogance, while the plain brown farmers’ tunics worn by Issachar and Naphtali suggest their self-effacing lowliness. Curiously, Zurbarán depicts these last two with greater warmth than the others: unlike Levi and Dan, who turn their backs to us, or the crowned-and-sceptered Judah, who seems to disappear beneath the folds of his royal clothing, Issachar and Naphtali are portrayed in simple profile, with their gazes directed down toward the earth. In contrast to the cursory mention they receive in Genesis 49, here by their very starkness Zurbarán has made them two of the most attractive portraits in the series, inviting viewers to linger contemplatively. Issachar, sandaled and accompanied by a donkey, and Naphtali, barefoot with a shovel and strap slung over his naked shoulder, eschew the guarded, self-conscious pride of their brothers, unmistakably evoking the humility of Christ. The moral and spiritual lesson imparted by Zurbarán’s portraits now emerges into view. 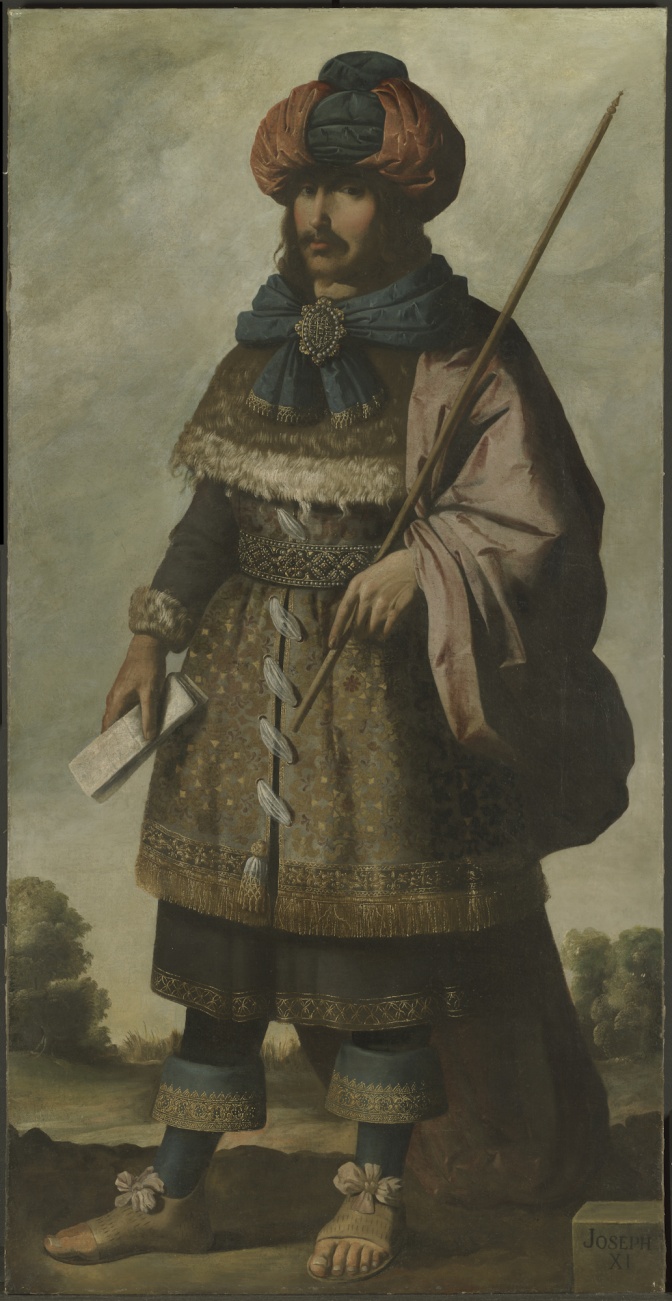 Of all the portraits, only one gazes directly at us, that of Joseph. Observing the other visitors, I noticed that the majority spent most of their time with this painting. Joseph, “set apart from his brothers” as Genesis 49 has it, is the most regally dressed yet also the most moving. Zurbarán depicts him standing erect, adorned with gold and blue fabric and holding the rod and petitions proper to his status as a high-ranking Egyptian official.

My encounter with this painting left me with a profound sense of healing and liberation. I knew the story: after his brothers had betrayed Joseph, they came back to him seeking grain during a time of famine. I imagined I was one of these brothers, guilty of the same pettiness and in need of a similar forgiveness. My eyes at first rested on the folded petitions in Joseph’s right hand, which became my petitions. His pointed index finger then drew my attention to the slender rod in his left, a symbol of his authority to judge, but also of his power to grant requests. I looked up to his eyes and was met with warmth and exceeding mercy: Zurbarán’s Joseph mirrors the image of Christ Pantocrator, the all-powerful judge of humanity, popular in Orthodox Churches, whose stern yet tender gaze sustains the entire world. The portrait thus becomes an icon, a visible assurance of God’s presence, before which it is impossible to feel judged in any way — except positively.

Jacob and His Twelve Sons shows us exactly what we need to see as we continue our Lenten pilgrimage. Our efforts to be more loving, to pray more, to serve more generously may fall short of what we had intended on Ash Wednesday. We may be tempted to judge ourselves harshly. Yet as Zurbarán reveals, none of us faces judgment alone. Together, as a flawed family, we are unconditionally loved.