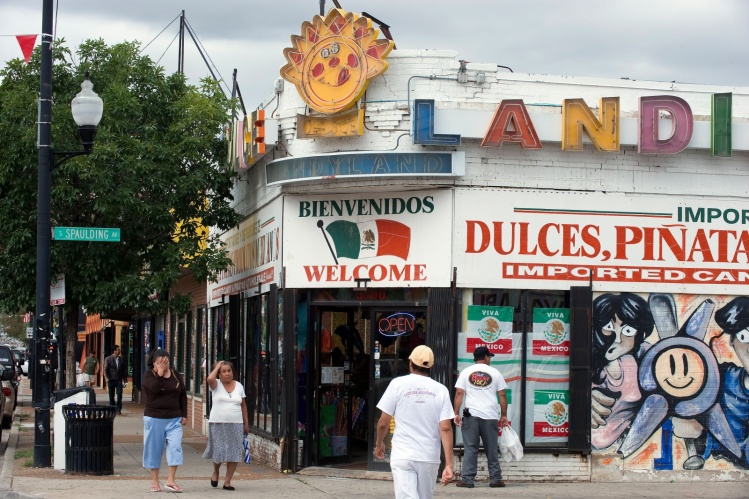 There are currently 60 million Latinos living in the United States. They are the nation’s largest “minority” group, and in 2018 accounted for 52 percent of the country’s population growth. In a very real sense Latinos in America are also under attack. The August 2019 El Paso massacre was a brutal expression of the xenophobia stoked by President Trump, and of the policies of his administration, not altogether unforeseeable when Latino immigrants are referred to as “invaders” and “rapists” and subject—adults and young children alike—to detention in cages.

How to counter the false political narratives that stigmatize and dehumanize Latinos? Examining their contributions to American society––particularly over the past half century––would make for a good start. A. K. Sandoval-Strausz, professor of history and director of the Latinx Studies Program at Penn State, has done that, writing a tour-de-force historical account of the important role of Latinos in urban revitalization. Barrio America: How Latino Immigrants Saved the American City details the interrelated factors that led to decades of urban decay and then to the period of recovery that has followed.

Blending historical, sociological, and legal analysis, Sandoval-Strausz structures his book in three parts that unfold chronologically. “There Goes the Neighborhood” details the forces that led to urban decay in the 1950s. “Here Comes the Neighborhood” tracks the new waves of Mexican and Caribbean migration that first repopulated and then restabilized urban districts from 1965 to the mid-1980s. “The Seeds of the Future City” shows how immigrants from all over Latin America both expanded existing U.S. barrios and established new ones, thus helping to alleviate national economic and housing crises. His conclusion brings readers to the present, providing much-needed insight into how Latino immigrants are now helping sustain economically distressed rural areas through a mix of labor, purchasing power, and tenancies.

Sandoval-Strausz knows both the usefulness and the limitations of relying on statistics to illustrate how Latinos have reshaped urban neighborhoods throughout America. So he also draws on dozens of interviews, conducted over twenty years, with the very migrants who helped resurrect two such neighborhoods: the Little Village community area in Chicago and the Oak Cliff section of Dallas. These oral histories help humanize “the people who so dramatically transformed their neighborhoods and their lives,” which in turn breathes life into what might otherwise have been a dry demographic study. Barrio America in fact reads like a well-researched novel, of interest to the scholar and accessible to the general reader, both of whom will want to keep turning the pages to see how the story ends.

Sandoval-Strausz’s first chapters provide a solid historical account of the emergence of urban centers in the early 1920s and their demise following mass white flight to the suburbs in the 1950s. He begins by surveying the development of both Little Village (originally called South Lawndale) and Oak Cliff. European immigrants living in these two neighborhoods originally depended on industrial and military manufacturing jobs. But after the Second World War, these jobs evaporated, weakening the urban white working class. Only economically privileged whites managed to flee the city for the suburbs; working-class whites were left behind to eke out a living in their once-bustling communities.

But soon their prevailing concern became the influx of black residents. These new arrivals were not welcome. Sandoval-Strausz describes the redlining and arbitrary loan practices that made it difficult for African Americans to purchase homes, and recounts how real-estate agents refused to show homes in white neighborhoods to black families. In Oak Cliff, white residents protested the construction of a housing development intended for black residents and terrorized black women by throwing fireworks at them. As these frictions mounted, white flight accelerated.

Latinos had to contend with subpar housing conditions, and were often the targets of crime and violence by the white community.
sharetweet

Until this point, the majority of Latino migrants to the United States had been Mexican. They often kept to themselves in colonias—areas on the peripheries of towns and cities closer to the fields and construction sites where the jobs were. The vast majority of pre-1950 Latino immigrants worked in agriculture and construction (especially cement-pouring), with many residing in the United States only for seasonal work. The colonias were therefore spaces in flux, more akin to work camps than actual neighborhoods. But as whites left urban areas, Latinos soon came in, and began to establish discernible neighborhoods. In the Dallas area of Oak Cliff, it was the barrio that eventually came to be known as Little Mexico—a separate and distinct neighborhood in a city that was becoming tri-racially segregated. In Chicago, it was a barrio known as the Near West Side, home to both Puerto Ricans and Mexicans, and hard by blocks of Italians, Greeks, Eastern-European Jews, and African Americans.

Yet Chicago’s ethnic mixing was no guarantee of comfort and safety. Latinos still had to contend with subpar housing conditions, were routinely caricatured and defamed by local newspapers, and were often the targets of crime and violence by the white community. In one of Sandoval-Strausz’s most compelling interviews, Little Village resident Guadalupe Lozano recounts how, despite her family’s presence in Chicago for two generations, she experienced “a lot of discrimination” from her mostly white neighbors. The police were often called on her and her friends—disparaged as “dirty Mexicans”—simply for playing in public parks. When she was eight, a white man accosted her on the street and then kicked her, which today would be considered a clear case of assault and battery against a minor.

Sandoval-Strausz does not overlook the relative privilege that some Latinos (especially those with whiter skin) experienced in relation to blacks and other darker-skinned Latinos. For the most part, though, whites ranked Latinos somewhere between black and white, not quite one or the other. Others grouped Latinos according to their native languages. This lack of a clear classification presaged the current identity debates within Latino communities (i.e. Latinx, Latino/a, or Hispanic?).

At the heart of Barrio America is “Nineteen Sixty-Five,” a pivotal chapter that analyzes a decisive year in U.S. immigration history. That’s when President Lyndon B. Johnson signed the Hart-Celler Immigration and Nationality Act, which abolished the xenophobic and restrictive National Origins Act of 1924. The 1924 law––enacted at the height of America’s obsession with eugenics and coinciding with the reemergence of the KKK––set national-origin quotas designed to bar Jewish and Catholic Europeans, Asians, Africans, and others. Elite whites feared racial and ethnic mixing, with one congressman declaring that the act would preserve the United States as “the home of a great people,” for the “English-speaking––a white race with great ideals, the Christian religion, one race, one country, and one destiny.” Nearly a century before Donald Trump was making promises about keeping people out, a supporter of the act stated that he would even “build a wall of steel, a wall as high as Heaven,” to keep out “inferior” races.

The passage of the 1965 act revealed that Latinos had finally arrived on the national political scene. Indeed, their clout had been growing for years, especially within the Democratic party: during John F. Kennedy’s presidential run in 1960, “Viva Kennedy” became the very first Latino-focused campaign in U.S. history. And as Sandoval-Strausz notes, the Latino vote proved decisive in President Kennedy’s narrow victory over Richard Nixon. Latinos were thus no longer peripheral. White politicians could hardly ignore their influence at the ballot, and began paying closer attention to their economic contributions, as both consumers and producers.

There were other pivotal moments in 1965: the collapse of the Mexican agricultural sector that year forced many Mexicans to seek economic opportunities in the United States; Fidel Castro’s government expelled more than one million Cubans from the island, many of whom settled in Miami and New Jersey; and the American occupation of the Dominican Republic prompted a wave of Dominicans to flee to the northeastern and southeastern United States. All of these groups began to arrive en masse in the same urban centers that wealthy whites were simultaneously fleeing, resulting in the economic and cultural revitalization of areas like Oak Cliff and Little Village.

Barrio America’s final two chapters highlight the ways Latino immigrants (both first and subsequent generations) further strengthened their neighborhoods. In part, their contributions were economic: they stimulated local economies (as consumers) and stabilized real-estate markets (by purchasing and renting apartments, homes, and stores). But they also established grassroots political organizations, thereby ensuring that their interests were represented locally, statewide, and nationally. Sandoval-Strausz concludes by underscoring the continued positive impact of Latinos on society, culture, and politics, in both urban and rural areas. Thanks to Latino immigration, the nation’s population has remained stable despite the historically low birth rates among the U.S.-born. And undocumented Latinos contribute about $13 billion in taxes yearly––funds that they will not benefit from through Social Security retirement payouts or Medicare because of their “illegal” status.

Barrio America ably maps the journeys of Latino immigrants, forcefully making the case that it is they, and not their detractors, who have made (and indeed keep making) America great. In the words of Sandoval-Strausz, close attention to the past enables us to hear the future of America “in the words of a people who, despite so many years of being dispossessed, overworked, underpaid, and falsely accused, have been among the most optimistic of all Americans.” If anti-Latino hostility in the United States is unlikely to abate anytime soon, neither is the indomitable spirit of U.S. Latinos. We’d do well to discover for ourselves the source of their strength.