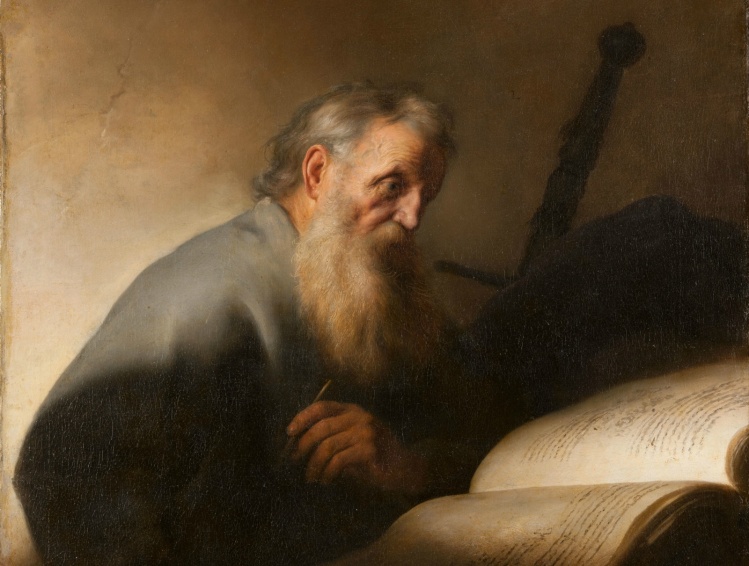 Only a very few translators of the Bible have produced masterpieces. Jerome’s Latin Vulgate is one; William Tyndale’s English translation, which contributed much of what is memorable in the King James version, is another. The individual efforts of Ronald Knox, Edgar Goodspeed, and James Moffatt all have their merits, but do not nearly reach the level of Jerome and Tyndale. Most biblical translations, in fact, beginning with the ancient Jewish translation of the Hebrew Scriptures into Greek (the Septuagint), have been communal rather than individual efforts: the King James version and its successors, the Revised Standard Version and the New Revised Standard Version were all produced by committees of translators and editors. If you don’t have genius, at least have consensus.

David Bentley Hart shows himself to be, in this translation of the New Testament, far from a consensus-seeking compromiser. He delights in challenging convention and proposing novel terms. In his publisher’s description, Hart is “an Eastern Orthodox scholar of religion, and a philosopher, writer, and cultural commentator,” who is a fellow at the Notre Dame Institute for Advanced Studies. Hart has spent years translating passages of the New Testament for students in as literal a fashion as possible, in order to cut through the linguistic and theological obscurities perpetrated by committee-generated translations. He undertook the task—clearly with relish—of this translation only after being assured by his editor that he would have the freedom to render the Greek in as faithful a way as he could manage.

In an introduction, Hart discusses his goals and certain translation choices he has made. In the introduction he also revisits an essay he wrote for Commonweal that has little to do with translation, and everything to do with the radical character of the New Testament and the radical character of the discipleship it demands. There is also an equally lengthy “Concluding Scientific Postscript,” which provides the reasoning behind his occasionally idiosyncratic translations of specific words and phrases.

Before turning to his decisions about diction, allow me a few comments on the character and quality of Hart’s translation overall. He sticks to his goal of rendering the Greek in what the back-copy of the book calls “a pitilessly literal translation.” He reveals no ambition for literary elegance, and displays none. Just the opposite: he allows shifts in tense to stand as they are; he refuses to smooth out irregularities in grammar or syntax; his translation of participles—that most marvelously fluid of Greek constructions—resembles those of schoolroom exercises. Indeed, the reader is reminded most of the sort of word-by-word, super-literal treatments of the Greek texts regularly performed by teachers of the New Testament in classrooms, to give their students a more direct “sense of the original meaning” than is available in the standard translations.

The approach works best when Hart is translating discourse rather than narrative. The translation of the Letter of James, for example, a composition that lacks the sort of theological baggage that bothers him, is clear and competent. The Book of Revelation, whose Greek is so bad that one suspects that the deliberate literary clumsiness is meant to convey the sense of divine disclosure, responds equally well to his hyper-literal reading. I also found his treatment of Paul’s letters—with the reservations I will note later—to make good sense, with his translation rarely calling attention to itself. Hart grasps, for example, that the difficult constructions involving variants of pistis Christou should be taken as subjective genitives (“the faith or faithfulness of Christ”) rather than objective genitives (“faith in Christ”). This contribution by itself deserves applause.

The Gospels, in contrast, are more problematic, precisely because Hart’s desire to allow the text to be rough and uneven actually tends to draw attention to the translation rather than to the Evangelists’ texts. I suppose the terms “fresh” and “startling” could sometimes be applied, not to suggest the uncovering of a meaning that previous translations hid, but only to recognize a certain clunkiness in the prose. In short, while the translation seeks to be faithful to the Greek, and is generally successful at that, it sometimes fails because of word choices that are odd and sometimes arbitrary.

Hart claims that his word-for-word translation makes for consistency, enabling the reader to have confidence that in every occurrence the same Greek word lies beneath his English rendering. But such is not the case. A couple of examples. The Greek noun nous means “mind” or “mind-set”; Hart so translates it in 1 Corinthians 2:16, but in Romans 12:2, he translates it as “intellect,” and in Philippians 2:5 (following the lead of the despised committee translators) he supplies “mind” where it is absent in the Greek. A similar inconsistency haunts the translation of dikaios (righteous/just) and its cognates. A consistent literal translation of Romans 1:17 would be, “God’s righteousness (dikaiosyne) is revealed, from faith to faith, as has been written, ‘And the righteous shall live by his faithfulness,’” but in the first instance, Hart has “God’s justice,” and in the second “the upright” (see also his translation of Romans 3:21-26). Similarly, in Jesus’ parable of the Publican and Pharisee (Luke 18:9-14), the reader of this translation will miss completely Luke’s play on dikaios language, because Hart translates the opening instance as “upright” and the final ironic instance as “vindicated.”

Hart is conversant with text criticism, and sometimes provides extensive notes concerning his choice among variants, as in the case of John 8:1-11, the story of Jesus confounding the scribes and Pharisees over the woman caught in adultery. All the more puzzling, then, is his failure to comment at all on his omission of “Son of God” in Mark 1:1, a title that is well attested in the manuscripts and plays an important thematic role in that gospel.

The contemporary associations of “bliss,” alas, tend to be with gurus and stoners
sharetweet

And sometimes, Hart simply misses the meaning of the Greek itself. Mark 15:10 says that Pilate knew that the leaders handed Jesus over “because of envy” (phthonos), which is quite a different vice than the “malice” selected by Hart. In Luke 24:5, if Hart were to capture the literal meaning, he would have had the men at the tomb ask the women why they were seeking “the living one” (ton zonta) among the dead, which is a declaration of faith, rather than “why do you seek the living among the dead?” as though they were in the wrong neighborhood. Again, a truly close rendering of the Greek in Galatians 2:16 would not follow the committee translations in having Paul assert “that a human being is vindicated not by observance of law but by the faithfulness of the Anointed One Jesus,” but rather, “that a human being is not vindicated by observance of the law except by  (ean me) the faithfulness of the Anointed One Jesus.” Again, Romans 8:12 does not say, “so, then, brothers, we are indebted to the flesh,” but the opposite, “so then, brothers, we are not indebted to the flesh.” I suspect that line is due to a failure in copyediting.

The truly distinguishing feature of this translation, though, lies in the choices Hart has made for certain key—and usually “theological”—terms, and he provides generous explanations of the most significant of these decisions in the introduction and postscript. The most important of these is the translation of Christos as “the Anointed (One)” rather than “Christ” or “Messiah.” It is a thoroughly defensible rendering, and Hart is consistent and adept in making it work both as a title and quasi-proper name. He runs into trouble only in Acts 11:26, which notes that in Antioch believers were called “Christians” for the first time—readers of this translation would expect something like “anointeds.” Hart’s translation of ekklesia as “assembly” rather than “church” is also solid and helpful, as is “supervisor” instead of “bishop,” although his choice of “ministers” for diakonoi still has an ecclesiastical ring; he probably would have done better with “helpers.”

Other choices are more dubious. He is near obsessive about translating aion always and everywhere as “Age” or “the Age”—seeking to avoid “forever” and “eternal,” which ends up being distracting, and worse, unclear. Has he gained anything by translating Romans 6:23 as “for sins’ wages are death, but God’s bestowal of grace is the life of the Age in the Anointed, Jesus our Lord”? He likewise gains little by translating hypokrites as “charlatan” rather than “hypocrite.” Nothing but shock value is achieved by translating porneia (“sexual immorality”) as “whorishness” or “whoring”; little but distraction gained by (not) translating kosmos as “kosmos” rather than “world.” Translating “Gospel/good news” (euangelion) as “good tidings” is weak, without either ancient or contemporary resonance. And the choice of “blissful” rather than “blessed” or “happy” for the Greek makarios is unfortunate, as in the first Matthean beatitude, “How blissful the destitute, abject in spirit, for theirs in the kingdom of the heavens” (Matt 5:3). The contemporary associations of “bliss,” alas, tend to be with gurus and stoners.

Finally, Hart finds himself snared by political or theological correctness—the very vice he sought to avoid—by consistently translating ioudaios as “Judaean” rather than “Jew.” He states that this translation is more historically accurate, referring to inhabitants of Judaea, and is free from the anti-Semitic uses that have been made of the term “Jew.” It is certainly the case that in some instances, the term is primarily geographical, as in the Gospel of John. And it is furthermore the case that, if the opposition to Jesus and the first believers were simply the people who lived in a specific geographical region, then it truly would be situated “long ago and far away.” Unfortunately, for Jewish (not Judaean) writers like Philo of Alexandria and Josephus, ioudaios had more than a geographical connotation; it named a people with distinctive allegiances and practices, wherever they were from and wherever they lived. And this ethnic/religious sense is the one dominant in the New Testament, especially in Paul. When Paul reproaches Peter in Antioch, “If you who are ioudaios live as a gentile and not as a ioudaios, how is it you require gentiles to become ioudaios?” (Galatians 2:14), he is not speaking of places of origin but of religious commitments and practices. Indeed, by using the neologism ioudaizein (“to act as a ioudaios”), Paul makes clear that it is a choice of life, not a location. In this translation decision, Hart has allowed a sensitivity to present-day theological and political concerns to obscure the meaning of the text.

Hart is neither a Jerome nor a Tyndale. But I don’t think he really aspired to be either of those worthies. His translation sometimes provokes to thought, sometimes simply irritates. But it truly is individual, and thoughtful, and anything but conventional. Hart’s translation has the important virtue of stimulating others who struggle with the New Testament to consider more carefully their own translations, in classrooms or in print.