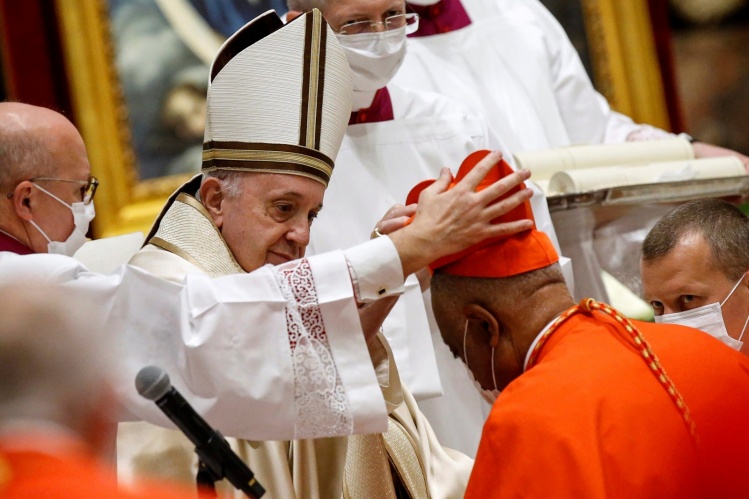 On November 28, Archbishop of Washington Wilton Gregory became the first African-American cardinal in a socially distanced ceremony at St. Peter’s Basilica in Rome. His appointment by Pope Francis comes during a period of political discord and renewed attention to racial injustice in the United States. Gregory said that his appointment was “a sign to the African-American community that the Catholic Church has a great reverence, respect and esteem for the people, for my people of color.”

Born in 1947, Gregory was raised in Chicago and attended St. Carthage Grammar School, where he converted to Catholicism at the age of eleven. He was so impressed by the priests at his school that, according to his sister, he wanted to be a priest even before he was a Catholic. He was ordained in 1973 and went on to serve as a bishop in Belleville, Illinois, and as an archbishop in Atlanta. He is still the only Black archbishop in the United States.

Gregory has been a healing presence in a diocese still recovering from the wounds of the sexual-abuse crisis.
sharetweet

Gregory was elected president of the U.S. Conference of Catholic Bishops in 2001, just as the sexual-abuse crisis began to make headlines in Boston and elsewhere. As president of the USCCB, he oversaw the groundbreaking document “Charter for the Protection of Children and Young People,” which established procedures for handling sexual-abuse allegations and set a “zero-tolerance” policy for priests found guilty of abuse. When Pope Francis appointed Gregory  the seventh archbishop of the Archdiocese of Washington in 2019, the area was still reeling from a new round of the sexual-abuse crisis. The previous cardinal, Donald Wuerl, had resigned amid the fallout from a Pennsylvania grand-jury report that accused him of mishandling clerical sex-abuse cases when he was the bishop of Pittsburgh. Wuerl’s predecessor, former Cardinal Theodore McCarrick, was defrocked after Rome received credible reports that he had sexually abused minors for years. “It’s not about the structures of the Church, it’s about the mistakes, the awful bad judgments that the Church made in not focusing on the people that had been harmed,” Gregory said in an interview with CNN. “We were so intent on caring about the clerics, priests, or bishops, that we did not see that the biggest pain to be endured was endured by the people that were hurt.”

As archbishop of Washington, an area that includes the District of Columbia and surrounding Maryland suburbs, Gregory has been a healing presence in a diocese still recovering from the wounds of the sexual-abuse crisis. He’s also been an outspoken voice on racial justice. “We are at a pivotal juncture in our country’s struggle for racial justice and national harmony,” he said at a Mass last summer in honor of the fifty-seventh anniversary of the March on Washington. He publicly criticized the St. John Paul II National Shrine in Washington D.C. for allowing Donald Trump to use it as a backdrop the day after police cleared protestors with tear gas so that the president could pose with a Bible in front of St. John’s Church. “I find it baffling and reprehensible that any Catholic facility would allow itself to be so egregiously misused,” Gregory said.

In an archdiocese where roughly 13 percent of Catholics are Black, Gregory’s appointment is a cause for celebration. “We finally have someone who looks like me, who grew up like me and can embrace his African-American heritage,” said Rev. Everett Pearson of Mount Calvary Catholic Church in Forestville, Maryland. “We’ve now got an opportunity to at least come to the table.”