From Muckraking to Clickbait 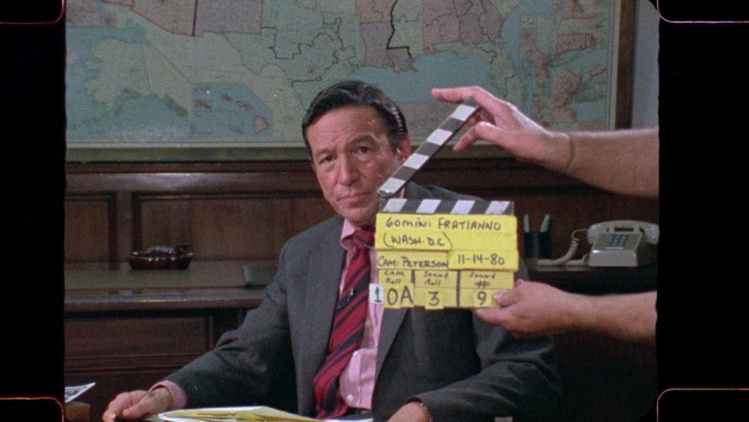 Could there be a more timely documentary about journalism, in our era of fake news, warring cable-news shows, and a president who routinely reviles the press as “the enemy of the people,” than one chronicling the rise of 60 Minutes and its star Mike Wallace?

Israeli director Avi Belkin reaches back to a time—it seems so long ago—when citizens not only trusted individual journalists, but invested the profession with a kind of collective public faith. Bolstered by the political drama of Watergate, journalists enjoyed an extended moment of high repute. We know the road from there: the rise of the internet and social media; mass attrition in the newspaper industry; increasing corporate pressure on the bottom line; the attenuation both of news cycles and consumer attention span; the toxic discourse of talk radio; steadily shrinking room for the very idea of mid-twentieth century journalistic objectivity; fiery partisanship and the emergence of advocacy journalism, and of the journalist herself as ideological gladiator.

Wallace was right there in the middle of all of this—both an avatar of change and a significant contributor to it. Though his career began in radio, it achieved its fulfillment via television; it seems fair to say that his journalistic skills were actuated by, and never separable from, the medium and moment of TV performance. A journalist who loved the camera, master of the gracious-seeming overture followed by the sudden knife thrust, Wallace pursued his subjects with a greedy and gleeful mercilessness. He became the emblematic 60 Minutes persona: relentless when it came to politics, endearingly naïve and at times ham-fisted in profiling artists, fawning when interviewing celebrities. In these attributes he held up a mirror to Americans themselves.

Belkin begins near the end (Wallace died in 2012 at ninety-three), with a late-career interview with Bill O’Reilly in which Wallace tut-tuts over clips of O’Reilly berating guests on his Fox show. “That’s not an interview, that’s a lecture,” Wallace scolds. “You’re not a journalist—you’re an op-ed columnist.” O’Reilly responds by sketching the argument for partisan journalism. “You have to engage nowadays, you have to challenge, you have to be provocative,” he tells Wallace. And then—noting that Playboy magazine called him “the most feared interviewer since Mike Wallace”—O’Reilly offers a backhanded compliment. “You’re the driving force behind my career,” he says. “I always tell people, ‘You got a problem with me? Blame Mike Wallace. He’s responsible.’”

It’s an adroit place to start, placing Wallace squarely in the lineage of today’s raucous slugfests. O’Reilly is wrong, at least where manners are concerned; Wallace would never have yelled at an interviewee to “Shut up!” as O’Reilly frequently did. And yet the fundamental impulse is the same—to provoke, to annoy, to embarrass, and finally to destroy. Though his manner was polite, Wallace was out for the kill, and his avid instinct for blood in the water is what made him so feared. “How would you like it done to you?” he is asked, in a mid-career interview, about his shark-like MO. “I wouldn’t like it,” he admits; and sure enough, when the tables are turned, and Wallace is asked how many times he has been married (answer: four), he bristles: “What possible relevance does that have?”

Following this extended preface, Belkin takes us back to the young Wallace, chronicling his early background in radio, then the motley array of chores he did in the dawning era of TV: game shows, live dramas, cigarette ads. In 1956 he hosted a WABD Channel 5 New York City program, Night Beat, on which he promised viewers “a direct, undiluted, unrehearsed, uncensored interview,” adding, “my role is that of a reporter.” The word “role” is significant. As his 60 Minutes colleague Lesley Stahl points out in another interview (Wallace must be the most-interviewed interviewer of all time), Wallace began not in journalism, but in “show biz.” “You’re an actor,” Stahl says, as he winces.

Night Beat interviews resembled police interrogations: dark room, bright lights, cigarette smoke, forceful questioning. The questions were blunt, often rude, and won Wallace the nickname “Mike Malice.” Night Beat was followed by The Mike Wallace Interview, an ABC effort that cemented his name as a household word—we see Jack Benny joking about not going on the show, cackling, “He’ll tear you to shreds!”—and was canceled amid controversies and lawsuits. Its demise sent Wallace back to hawking products on air. It’s amusing to see this future scourge of the corrupt holding up a tube of “Revlon’s new Lanolite Lipstick” and smiling gamely; the documentary reminds us of TV’s roots in advertising, and pinpoints the essential Wallace not as an actor, really, but a pitchman.

Vowing to stop doing commercials and become “a serious reporter,” Wallace in 1963 took a job with CBS News, joining a newsroom ruled by Cronkite, Sevareid, and Murrow (Wallace recalls his reception as “less than cordial”). Jumping into the middle of a fractious decade, he reported on political conventions, the civil-rights movement, urban riots, and Vietnam, which turned him from a hawk into a doubter and finally a dissenter. Interviewing Paul Meadlo, a soldier who participated in the My Lai massacre, he asks, “How do you shoot babies?” and Meadlo replies, with chilling casualness, “It’s just one a’ them things.” In another clip, Wallace reviews the events of 1968—the war, the riots, the assassinations of Martin Luther King Jr. and Robert Kennedy—and summons bewilderment and despair. “What kind of country is the United States?” he asks. “What curious strain of violence is there in the American people?”

In 1968, CBS News producer Don Hewitt came up with the idea for a news magazine that would showcase Wallace doing his Night Beat style of interview. 60 Minutes debuted that year, with Wallace and Harry Reasoner co-hosting. It stumbled along, with low ratings, until Watergate; the scandal transformed it, providing a rich cast of malefactors—Liddy, Colson, Haldeman, Ehrlichman—for Wallace to prosecute. One memorable episode shows Wallace listing a broadside of charges as Ehrlichman sits grimly, sweat overspreading his whole face. “Is there a question in there somewhere?” Ehrlichman finally asks. It is riveting television.

Belkin chronicles the show’s expansion into what were essentially sting operations, uncovering kickbacks, scams, cover-ups, child sex rings and other malfeasances, frequently catching crooks red-handed, on air. Its popularity boomed, and Wallace became a celebrity. He provided the face for a sustained effort against the cigarette industry, whose flacks and hacks, rotely denying the cancer connection, made fine villains while allowing the show to buff its public-interest credentials (though the network cautiously withheld its story on tobacco-industry whistleblower Jeffrey Wigand, as Wallace fumed behind the scenes).

With time, the methods of 60 Minutes, and the celebrity journalism it promoted, sparked a backlash. Its own success threatened to drown it in a news glut, as news magazines proliferated and shaded more and more into talk shows. Belkin draws a clear line from Wallace to the Geraldo Riveras and Maury Poviches who followed. There was also the 1982 lawsuit by General William Westmoreland, who after a documentary on Vietnamese troop strength during the war charged CBS and Wallace with “a scurrilous attack on my personal integrity,” calling the newsman “a disgrace to American journalism.”

For those who grew up on 60 Minutes, Mike Wallace Is Here serves up a greatest-hits of memorable interviews. There’s Barbra Streisand, on how fear motivates her (“It’s the energy behind doing your best work”); an elderly Eleanor Roosevelt (“Mrs. Roosevelt,” Wallace says in a polite tone, “I think you will agree that a good many people hated your husband”); Marilyn Monroe, penetratingly reflective about the costs of celebrity; Malcolm X, who, asked how much daily danger he faces, smiles and answers, “I probably am a dead man already.” Grilling President Richard Nixon about his lack of charisma, Wallace elicits the classic, self-pitying response: “Some public men are destined to be loved, and others are destined to be disliked.” In Tehran, during the Iranian hostage crisis, he begins an interview with Khomeini by quoting Anwar Sadat calling the ayatollah “a lunatic,” sparking gasps among Khomeini’s retainers. But my favorite is an interview with the chain-smoking Italian journalist Oriana Fallaci. Wallace asks Fallaci if being a journalist makes her feel powerful, and she laughs, spewing cigarette smoke dismissively. “Oh no!”, she says. “We are like dogs. Bow wow wow! Maybe someone listens.”

Fallaci calls herself a historian, refusing to back down when Wallace challenges her. “A journalist is a historian who writes history in the moment that it happens,” she insists. “And it is the damn best way to write history.” Wallace may have challenged her for the sake of a lively exchange, but he surely agreed. Indeed, his whole career seems to have been designed to place him in that live, history-recording moment. Throughout, Wallace insists that his aggressive approach to his subjects represented more than mere pleasure in confrontation. “Don’t confuse anger or hostility,” he says in an interview with Larry King, “with an insistence on getting to the bottom line, on getting facts.”

It’s a crucial message for an era such as ours, when political life grows ever more raucous, the web allows for the propagation of viral conspiracy theories, and the efficacy and very existence of facts comes under daily assault. This documentary shows Wallace contributing both good and ill to the evolution of American journalism. What Bill O’Reilly failed to grasp is the difference between muckraking journalism—a practice with a long and gloried tradition—and today’s buzz-oriented, clicks-and-eyes-driven entertainment journalism. Belkin makes clear that Wallace contributed a great deal to blurring that line, but that ultimately he remained a real journalist. His sense of mission could be grandiose. Thus we see the young host on the set of Night Beat, warning his viewers about how authoritarian governments crack down on journalists: “A nation’s press,” he intones, “is a good yardstick of a nation’s health.”

How is our health right now? The prognosis would not seem bright. A deft segue in the film cuts from Spiro Agnew in 1969, lambasting the liberal press for “a distorted view of America,” to candidate Trump at a 2016 rally, pointing out and deriding “the fake news media—look at them back there!” Though Wallace didn’t live to see the rise of Trump, he viewed our era darkly. Are things in America getting better or getting worse? he was asked toward the end of his life. “Oh, worse,” he said, without hesitation. “Definitely getting worse.”

In the Harsh Light of Trumprise