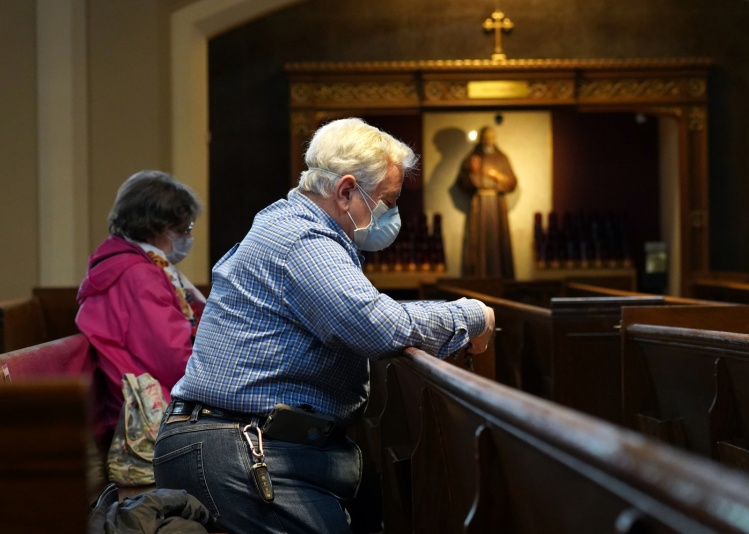 Attending mass during a pandemic highlights the individual vulnerability and fragility we all share (CNS photo).

“When he disembarked and saw the vast crowd, his heart was moved with pity for them, and he cured their sick.” So read the Gospel from Matthew on August 2. I looked around the church, the clutch of parishioners fiddling with their masks. I love the thought of Jesus being “moved with pity” for the desperate crowds flocking to him. But in moments of fear and pain, the image lands differently.

I tried to shove aside the feeling—Where are you now, Lord?—and listen to the homily that followed. It was the first time I had attended Mass in person since the start of the pandemic, and I assumed the priest, like priests everywhere must be doing, would work the global crisis into his remarks. “If you bring your needs to Jesus,” he said, “miracles can happen.” A few loaves and fish will feed a crowd of five thousand. Illnesses will be cured. The dead will be raised! If we pray and have faith, he said, we can all get “our miracles.” I waited for the other shoe to drop—What about the people who don’t get their miracles?—but it never did.

It’s not the priest’s fault that to me on that day, the homily felt extra-useless. It came on the anniversary of my dad’s death, twenty-one years ago. My family had decided to attend Mass in person for that reason. I looked around again at the small group of parishioners. I couldn’t read their faces behind their masks.

The masks. I didn’t realize how hard it would be to see people attending Mass like this. Faces I’ve known for years, obscured for protection. Their songs muffled but faithfully sung. No sign of peace. Suddenly, we were all very fragile, not people in bodies but bodies that could hurt. An elderly parishioner approached the altar, bowed, and prepared to serve as a Eucharistic minister.

It’s not doubt about his existence or goodness that I feel, but frustration: God, why are you leaving this to us?
sharetweet

“How could a loving God let this happen?” is an ancient and understandable question, but usually isn’t one that I feel moved to ask. Its formulation as a statement rarely occurs to me either: “A loving God would never allow this.” Suffering doesn’t seem avoidable. The saints and martyrs suffered. Jesus suffered. It’s not doubt about his existence or goodness that I feel, but frustration: God, why are you leaving this to us?

Communion began, and the congregation made its way up the aisle, single-file. I saw people I know, whose siblings and parents and aunts and uncles I also know. One family struggles with unemployment, another with addiction. A child who has lost a parent. A parent who has lost a child. A cancer patient. Some suffer depression and other mental illnesses. Many elderly, many frail. Literal widows and orphans. What about the people who don’t get their miracles?

Faithful as the congregants were, I’m not sure how many of us were there to claim our own, specific miracles. There is no guarantee of freedom from pain, and the only promise is God’s love. I wished I had heard it in a homily, but that truth was there for me to see. Our weak bodies are susceptible to a virus, and our fragile hearts are vulnerable to everything else.

The vast crowd seeks Jesus. His heart is moved with pity for them.