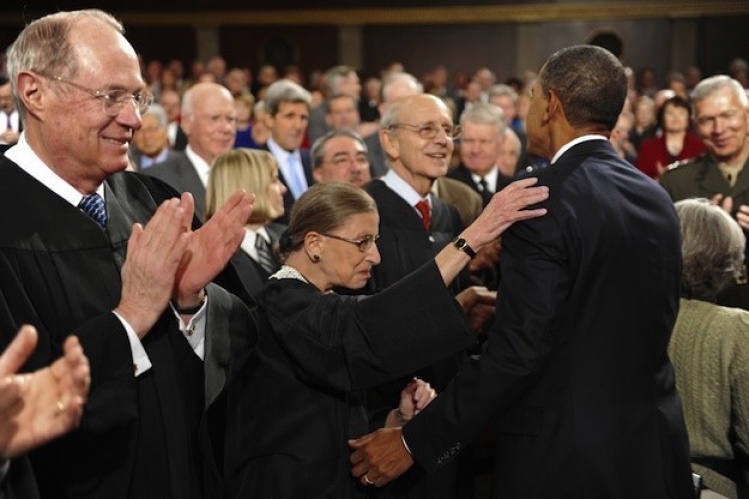 Justice Kennedy’s concurring opinion in the 5–4 vote last week expressed his agreement with the majority’s holding that some corporations are protected under the Religious Freedom Restoration Act (RFRA) and that, at least for the litigants at hand, the mandate unlawfully burdens their religious freedom civil rights. He also underscored that the free exercise of religion means more than just the right to hold beliefs and worship in private. Citing a First Amendment precedent (not just RFRA, which could be amended or repealed by Congress) to emphasize his point, Justice Kennedy said religious freedom includes “the right to express those beliefs and to establish one’s religious (or non-religious) self-definition in the political, civic, and economic life of our larger community.” His message to the Obama administration was unmistakably clear: You are not being sufficiently respectful of religious freedom.

At the same time, Justice Kennedy quietly gave notice to the next set of mandate opponents that their legal challenges might not be as successful as Hobby Lobby’s. He noted, as did Justice Alito’s majority opinion, that the Court’s Hobby Lobby ruling did not address the RFRA challenges currently in the judicial system brought by some religious nonprofit institutions, including the University of Notre Dame (where I am a professor) and the Little Sisters of the Poor.

But Justice Kennedy then went one step further, suggesting—not definitively, but unmistakably—that his vote for Hobby Lobby should not be interpreted as a sure vote for Notre Dame and the other nonprofit litigants.

The reasoning: These religious nonprofit litigants have been offered an accommodation by the Obama administration that would push off the cost and responsibility of contraceptive coverage to the nonprofits’ insurance companies and (for the self-insured) third-party administrators. The litigants do not see that accommodation as sufficient, of course, but its existence was enough for Justice Kennedy to write, “There is an existing, recognized, workable, and already-implemented framework to provide [the disputed contraception] coverage.” That accommodation, he said, furthers the government’s interests “but does not impinge on the plaintiff’s religious beliefs.” It does not take a mind-reader to see that he may say the same to Notre Dame and the Little Sisters of the Poor.

Why, then, would Justice Kennedy tell the Obama administration to take religious freedom more seriously and, at the same time, outline how he might rule in favor of the administration in the next round of cases?

An answer may lie in the opportunity afforded by the result of the Hobby Lobby case. The decision will send the Obama administration back to the drawing board to rework the Affordable Care Act’s regulations.

When it does so, the president should invite the religious nonprofits to the negotiating table to hammer out a compromise that implements contraception coverage in a manner that better protects religious freedom. As Hobby Lobby has shown, Justice Kennedy almost certainly holds the decisive vote in the next set of cases, and he has given both sides good reason to fear how he might cast it. Both sides, accordingly, have reason to avoid it.

This controversy need not be settled by the courts. It was provoked by an administrative rule issued by HHS; it could be resolved by a different, better, and more accommodating rule.

Back in 2009, Rev. John Jenkins, the president of Notre Dame, received sharp criticism from conservative Catholics for bringing President Obama to campus and giving him an honorary law degree. It was a generous gesture, given Obama’s record on abortion. Perhaps now is the time for Obama to return Father Jenkins’s invitation: Why not bring him to the White House, along with the Little Sisters of the Poor, close the doors, and keep everyone in the room until a compromise acceptable to all is found?

The president would undoubtedly take a hit from the far left for negotiating on contraceptive coverage, and the “war on women” rhetoric unquestionably plays well for Democrats politically. But in these excessively partisan times, it would be a notable achievement to show how Americans of diverse beliefs and different values can come together to find common ground.

Why not take up Justice Kennedy’s invitation to compromise? The alternative is for him to impose a decision, one that will inevitably further divide the country.