By Thomas Merton
Spirituality
Religious Life
From the Archives 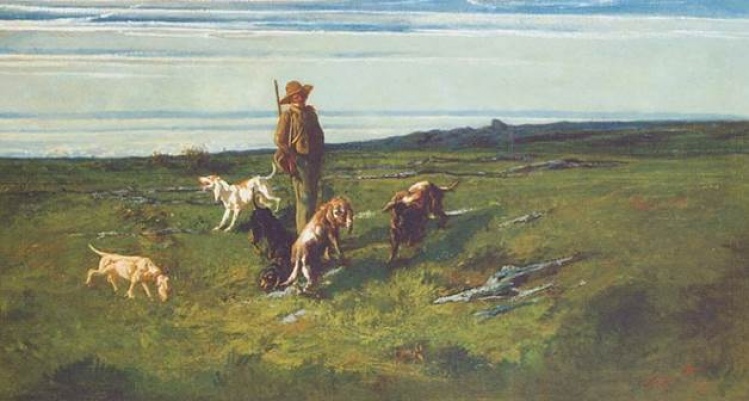 A Hunter and His Dogs, Augustin Chenu

THIS IS the way a year ends: with an examination of conscience.

We are permitted to meditate at a distance from the monastery building, but within the enclosure. It is New Year's Eve. I meditate. I am next to the ruins of an old horse barn which the founders of the monastery built with great labor one hundred years ago and which we will presently pull down in one day with an atrocious machine. It is silent here. And I sit on a pile of rotten lumber looking at the cedars and the iron grey' sky and the bleak pasture inside the enclosure wall, where the mules go starve on Sundays when they play.

There are some hunters in the outside orchard. I see them enter the woods. Two of them: white pants and brown pants. They are not very serious hunters because they talk very loudly, all the time. Their talking echoes through the wood. Their dog is far ahead of them, barking and barkng. Soon they just stop dead in the middle of the wood and talk. But the dog becomes furiously active, ranging from one end of the wood to the other, barking even more loudly than before. It is quite obvious that the hunt is a lie. The dog is after nothing. Neither are the hunters.

Suddenly, the one with white pants climbs up on the enclosure wall. He stands on top of it, with his gun in his hand. It is all an act. "Here I am standing on the wall. l am prepared to shoot all the rabbits as they go by. My dog will rout them out and they will all file past this particular point in an orderly procession. From this well chosen position I will shoot them down one after the other, and will return home staggering under a load of game, and justifiably proud of my success."

The whole universe knows, of course, that if he ever fired that gun he would fall off the wall backwards, inside the enclosure, and would then become a monk.

Meanwhile I am in an equivocal position. The hunters have not looked up the hill and scrutinized me, but they know l am here. I know that this implies some obligation on my part to act as if I know that they know that I am watching them.

Man is a social animal. What am I supposed to do about it? Will they feel offended if I ignore all social conventions and express no resentment at the presence of one of them on our enclosure wall? An enclosure wail, after all, is a monument to a most sacrosanct legal fiction. There is not only the question of property but the question of cloister. Will white pants be disappointed if I do not somehow indicate that I think he might be sinning against both justice and religion? Am I betraying my monastic community and civil society and the Church itself by not standing up and uttering wild, inarticulate noises in my throat and indicating, by violent gestures, that white pants should get down off the enclosure wall, on the outside, and stay there? After all, I am a Trappist. For all he knows, I have a "vow of silence." I must not talk, still less cry out. But the fact that I am (in the eyes of those who know nothing about it) "vowed" to silence means by implication that I am also somehow bound to defend all the other rigid social obligations in the universe—property, enclosure walls, and every form of self-restraint.

THERE he stands on the wall, the hunter, the libertine. Here I sit by the ruins of the horse-barn, in our cowl, our long sleeves, our pointed hood, holding a religious book. I am the intransigent guardian of every moral prohibition that was ever formulated ....

But we come to an understanding on two levels.

Man is a social animal. What am I supposed to do about it?
sharetweet

First: I live up to my obligations as a social animal. I make no sign, no gesture. I simply allow him to gather, horn my immobility, that I am legally invisible. Yet I also permit him to deduce, from the fact that I look in his direction, that I entertain toward him and the world be represents an abstract, sorrowful, disembodied and somewhat official good will. So there we stay. He stands on top of the wall, "hunting" and I sit on a board, "meditating." I have a book with me. He has a gun. Both are factors in a disguise. This brings me to the second level on which we come to an agreement.

After that we will be able to get together, not in the tangle of artificial relations in which we all eventually strangle, but in the vital communication which is very simple because it is charity. God is charity.

SOON THEIR DOG comes inside the enclosure. It is very simple for him to get in. He wriggles through a hole under the wall. And he rushes up and down the pasture, quite aimlessly of course, barking and wagging his tall with mongrel optimism. At this, three colts which have been out of sight all this time, perform the duty which I have failed to observe. They canter down the pasture to where the dog is, not in protest, not in judgment, but simply as an expression of instinct.

Immediately white pants knows what to do. He stands up on the watt and says, tersely, to his companion in the woods outside: "Call the dog." This, of course, clearly indicates that there has been no understanding between us at all. The fact that the colts have come down the pasture to investigate a strange dog means that the enclosure wall, is, in fact, an enclosure wall, that property is property, laws are laws, "vows of silence" are "vows of silence" and thus the hunters have deduced, quite wrongly, that if I have remained silent it is because of a vow. They are comforted to think that the 'vow" has taken precedence over my injured property rights as a representative member of a monastic corporation. This, then, establishes quite definitely that the presence of white pants on the enclosure wall matters. Whereas I, to my shame, have been acting as if it did not matter at all.

Thus the hunter on the wall picks himself up stiffly. He turns eastward, with the gun in his hand, and walks along the top of the wall, sure of his steps, sure of his position in the universal order of things, sure that he is a hunter after all. And that leaves me in the presence of an immense difficulty—the task of asking myself if I am a monk in the same way as he is a hunter, and if so, if this should be a cause for alarm.

Is The World A Problem?