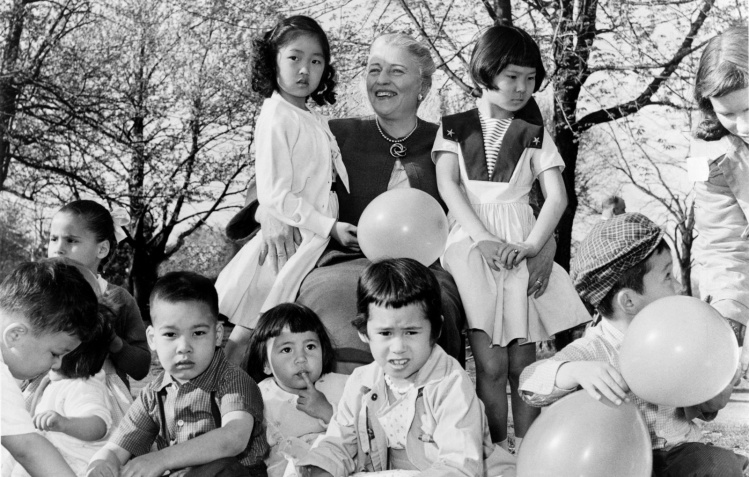 Pearl S. Buck with Chinese-American children placed with families through her Welcome House. The daughter of missionaries, Buck spent most of her childhood in China. (Everett Collection Historical / Alamy stock photo)

Little did the historian David Hollinger know that the missionaries his parents occasionally invited to their home for dinner in rural 1950s Idaho would occupy him in his retirement.

But so they have. Hollinger’s latest book, Protestants Abroad, traces the lives and activities of thousands of mainline American Protestant missionaries and, importantly, their children, from the early twentieth century into the 1960s. In its deft interweaving of personal stories and historical argument, it is the most accomplished piece of prose yet written by an exceptionally accomplished scholar. Time magazine founder Henry Luce, best-selling novelist and Nobel Prize–winner Pearl Buck, John Service (a State Department official alleged to have “lost” China during the anti-Communist fervor of the early 1950s), and Margaret Landon, the author of the book that inspired the Broadway musical The King and I, come to life in a new context, as “mish kids,” determined to broaden American exposure to the world. So, too, do former missionaries founding area studies programs in the universities, organizing the Peace Corps, and pioneering the practice of interracial adoption. In a term that for Hollinger is the highest praise, these men and women became “missionary cosmopolitans.”

In an era when academics of all ethnic backgrounds emerge from a worrisomely homogenous set of undergraduate institutions, Hollinger’s own journey from Idaho to La Verne College, a Church of the Brethren institution located outside Los Angeles, is also something of a provincial to cosmopolitan narrative. As a boy, Hollinger studied each issue of National Geographic, carefully preserving maps that suggested the wider world he would encounter as a professional historian. He eventually abandoned his religious faith, but he never left behind his interest in the intertwined history of religion and secularization. He found his way to graduate school at the University of California, Berkeley, where for the first time, he wryly notes, he was offered a glass of wine at a social occasion. (The Brethren practiced abstinence.) There he also witnessed some of the most tumultuous free-speech and anti-Vietnam war protests. He then obtained a faculty position at Michigan, before returning to Berkeley.

Hollinger’s preoccupations over five decades as an historian exhibit an unusual consistency. Beginning with a study of the early twentieth-century philosopher Morris Cohen and then with a series of influential articles, he sketched a world, the American university and its environs, from the early twentieth century to the 1960s. Hollinger’s professors and writers moved from a narrow, constrained set of human possibilities to a wider more capacious understanding of difference and commonality. He especially admired the practitioners and defenders of modern science with its principle of verifiability across cultures.

Sometimes, missionary children such as Pearl Buck angrily rejected a Christianity they saw as trapping their parents in a meaningless effort at conversion.
sharetweet

Not everyone agreed with Hollinger’s assessment. To their critics, when academics and intellectuals of this era said “Man” they really meant men, not humankind. Science itself rested on specific cultural practices, not a universal technique. And the search for commonalities across cultures threatened to substitute a bland, even insidious, white, Anglo-Protestant norm for ethnic difference. The most influential book in this vein, Edward Said’s Orientalism (1978), outlined how British and French scholars constructed an imagined East to further imperial agendas. Disciples of Said sallied forth in various directions, finding imperialism, for example, in the same back issues of National Geographic that had once so enraptured the young Hollinger.

Hollinger did not deny the blinders worn by his subjects. And he recognized that provincialism of a different sort lurked beneath arguments made in learned journals. But he urged a second look at intellectuals who, for all their faults, advocated a universalism that encompassed humanity more generously than its predecessors. He told a measured but nonetheless triumphant tale of the research university throwing off the shackles of its Anglo-Protestant heritage and welcoming Jews, especially, in the 1940s and 1950s, and how those Jews in turn accelerated intellectual progress across the arts and sciences. And he charted a public culture steadily more welcoming to those once understood as outsiders. Danger lay within the very term “multiculturalism” too, and Hollinger distanced himself from the crudest efforts to cast ethnic categories in support of policy goals such as affirmative action. Or to lock individuals into ethnic categories not of their own choosing. Instead he admired the “generous disposition toward the varieties of humankind” displayed by his cosmopolitan subjects.

Enter Protestant missionaries. The subtitle—how missionaries tried to change the world but changed America—summarizes the argument. Most of Protestants Abroad is a detailed discussion of how the experience of living abroad in Asia and the Middle East distinguished missionaries from almost all of their fellow citizens. Hollinger urges his readers to see past the cliché of missionaries unthinkingly imposing Western mores on recalcitrant natives. Instead he highlights how the missionary experience cultivated a respect for distant cultures (including language training) and encouraged the development of programs to support further study of, say, Japan or Turkey.

Hollinger underplays the ability of Christian missionaries to convert indigenous peoples, neglecting Africa, and relatively, Latin America, where, admittedly, fewer American Protestant missionaries ventured, but where the missionary enterprise (Protestant and Catholic) changed the face of global Christianity. He is at some pains, in fact, to suggest that the growth of Christianity in Asia and Africa is independent of missionary effort, an odd claim that may reflect Hollinger’s own nervous understanding of modernity more than that of contemporary Chinese or Nigerian Christians. He wonders, remarkably, if Christianity in the Global South is “really part of a single community of faith with the Protestants of the North Atlantic West.”

How missionaries “changed America” is more comfortable terrain. Prominent figures such as Edmund Sopher, a child of Methodist missionaries in Japan, favored dismantling Jim Crow, when such a view held little sway within major political parties or corporate America. Sopher also defined racism as a “world issue” with repercussions in colonial systems around the globe. Another Methodist returning missionary, Ruth Harris, segued from work as a teacher in China to a leadership role in civil-rights marches. Other missionaries fought to legalize interracial marriage.

Two poignant undercurrents run through Protestants Abroad. The first is a loss of faith among many of Hollinger’s protagonists. This often began with a recognition that denominational differences between Methodism and Presbyterianism that loomed large in, for example, Indianapolis, proved irrelevant in Indonesia. Unsurprisingly, then, and Hollinger demonstrates this beautifully, missionaries led many of the ecumenical movements sprouting in the North Atlantic in the early twentieth century. Catholics stood outside this consensus, rejected as overly dogmatic and tied to Rome, and themselves hesitant to venture beyond the familiar precincts of the Catholic subculture. So, too, did Protestant Evangelicals still focused on conversion and a personal decision for Christ.

A more capacious understanding of Protestantism often led to doubts about Christianity itself. Given his occasionally polemical posture—one of his essays about religion in the university is titled “Enough Already: Universities do not need more Christianity”—Hollinger’s treatment of men and women struggling to redefine their religious beliefs is sensitive and compelling. Sometimes, missionary children such as Pearl Buck angrily rejected a Christianity they saw as trapping their parents in a meaningless effort at conversion. More often respect for indigenous culture morphed into a sense that Christianity was dispensable. Delegates to the World Council of Churches meeting in Sweden in 1968—including a onetime Methodist seminarian and future Democratic presidential nominee, George McGovern—congratulated  themselves for replacing the term “mission” with the term “service.” But service did not require Christianity. No empirical data tell us whether missionaries were disproportionately likely to become “post-Protestant,” but Hollinger’s insight is to see Mainline Protestant missionaries shaping American culture even as the churches that nurtured missionaries declined. The human-rights movement of the 1970s, Hollinger points out, had many sources, but among them was the transmutation of religious desires into secular goals.

The second undercurrent is political. Already committed to an ideal of respect for diverse cultures, the missionaries felt the sting of the American underwriting of South Vietnam (inherited as a colony from the French) more deeply than many of their secular contemporaries. Even more profoundly than in the persistence of Jim Crow, here lay unhappy proof of the United States as a colonial force in a decolonizing world. An early generation of missionary children such as Henry Luce could write of “The American Century” as one quite different from its European imperial predecessor, and Luce carried this support for the U.S. role in the world into support for the effort in Vietnam. A later generation of missionaries, formed in the cauldron of the 1960s, took a more polemical stance. These more jaundiced Protestant observers despaired at their inability to alter military strategies developed, in their eyes, by a corrupt foreign-policy establishment. The distance traveled in a generation—from patriotic scions of the mainline Protestant establishment such as Presbyterian John Foster Dulles serving as secretary of state, to missionaries and development workers coordinating protests against Vietnam policy published in the New York Times—was striking. The topic is outside Hollinger’s remit, but the story of the several thousand American Catholic missionaries in Latin America in the 1960s is similar, with many returning to the United States after work in Peru, Bolivia, and El Salvador, and leading agitation against American governmental policy in the region.

Hollinger lauds his missionary subjects in the final lines of Protestants Abroad for grasping the “profundity of the problem of solidarity.” The compliment is well earned. And Hollinger himself demonstrates a kind of solidarity, or empathy, with his missionary protagonists. One might wish for Hollinger to cast his historical eye on other religious groups, if only to temper the implicit claim that recognition of a distant person’s humanity depends upon porous boundaries in one’s own religious community. What dispositions did the African-American Christian civil-rights activists possess in the South that allowed them to see the humanity of their oppressors? Or Polish Catholic trade-union members negotiating with Communist leaders, in a union actually named “Solidarity”? Hollinger sees developing a wider sense of solidarity as the problem for the twenty-first century, notably in response to the ecological crisis. In earlier writings he lauded a civic solidarity that in the mid-twentieth century enabled Americans to better take responsibility for their most vulnerable fellow citizens. Just how to develop such solidarities does seem a vital question. After all, we in the United States are beginning to understand how solidarities once won can also be lost.