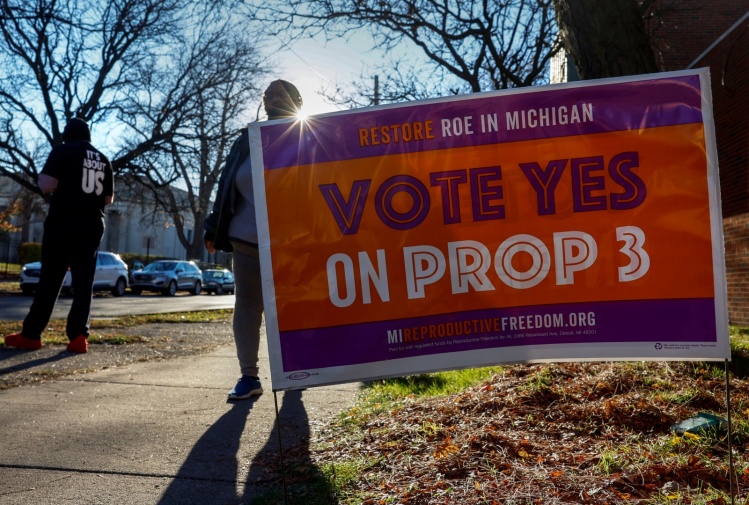 A sign in support of Proposal 3, a ballot measure to codify the right to an abortion, stands outside a polling station in Detroit, Michigan (CNS photo/Evelyn Hockstein, Reuters).

Midterms are typically a grim affair for the party in power, but Democrats went into last week’s election with more than the usual share of handicaps: a president whose approval rating had dipped to 40 percent, an inflation rate that had jumped to near 8 percent, and an electorate that overwhelmingly (72 percent) thinks the country is on the wrong track. Yet Democrats have not only managed to dodge a red wave; they have maintained and may even expand their majority in the Senate and are somehow still in contention for control of the House, though that seems much less likely. The problem is that, given the number of wild cards at play in this unconventional election, they can’t be sure exactly how they did it.

Was it Dobbs? The decision by the Supreme Court to overturn Roe v. Wade and send the issue of abortion back to the states certainly galvanized Democratic voters, especially in states with abortion legislation on the ballot. For example, Michigan voters established a constitutional right to reproductive freedom while giving Gretchen Whitmer a double-digit victory in the governor’s race and flipping the state’s House and Senate blue. Meanwhile, in New York, where abortion rights seem secure, Republicans flipped four House seats. Still, while fears that anti-Dobbs sentiment may have peaked too early over the summer proved unfounded, the issue may not remain as galvanizing in 2024.

Did Democrats do well because voters have simply had enough of Trump and Republican extremism? High-profile Trump-backed candidates underperformed, with Mehmet Oz falling to John Fetterman in Pennsylvania, Herschel Walker trailing Raphael Warnock in Georgia (though making it to a December 8 run-off), and a number of stop-the-steal candidates going down in House elections. There was also evidence of increased ticket-splitting, running counter to a recent trend toward uniform ballots in a highly polarized political environment. In New Hampshire, voters reelected Gov. Chris Sununu, a centrist Republican who has criticized Trump, while handing Democrat Maggie Hassan a decisive victory over Don Bolduc, who echoed Trump’s claim that the 2020 election was stolen. Independent voters also bucked a long-standing trend, opting for the Democrats by a two-point margin when previous midterms have seen them swing to the party out of power by twelve points or more. The Democrats’ messaging on Republican threats to democracy, including two prominent speeches by President Biden, may have been effective.

Or did some Democratic candidates finally do more than just passively benefit from Republican extremism? A veritable blue wave in Pennsylvania suggests that economic populism might have paid off. Fetterman built a successful campaign with attacks on corporate profiteering, support for unions and a $15 minimum wage, and a proposal to lower the age for Medicare eligibility. Oz repeatedly tried to tie Fetterman to Bernie Sanders rather than to Joe Biden, and lost despite the effects of Fetterman’s stroke hampering his debate performance. Of particular note, Fetterman made inroads in rural areas that swung hard toward Trump in 2016, bettering Biden’s 2020 performance in every county in the state. Similar results followed in western Pennsylvania for economically left-wing House candidates Summer Lee and Chris Deluzio. And Governor-elect Josh Shapiro, who won his race by 15 points, has a record of opposing corporate power as the state’s attorney general and insists on calling himself a “populist.”

As attention turns toward 2024, there’s a real danger of complacency for Democrats. Despite unexpected losses, Republican candidates still won 52 percent of the overall votes in House elections. Biden remains an unpopular president and will turn eighty-two in November 2024. Other potential candidates from the party’s centrist wing, like Kamala Harris and Pete Buttigieg, have glaring weaknesses. Abortion is unlikely to play as large a role in 2024 as did in this year’s midterms. And, if Ron DeSantis, not Donald Trump, is the GOP nominee—which looks much more plausible than it did before the election—Republicans will be free of much of their stop-the-steal baggage. If Democrats are unable to make a positive case to the American people focused on issues like runaway corporate power and economic equality, the red wave may prove to have been merely deferred, not defeated.