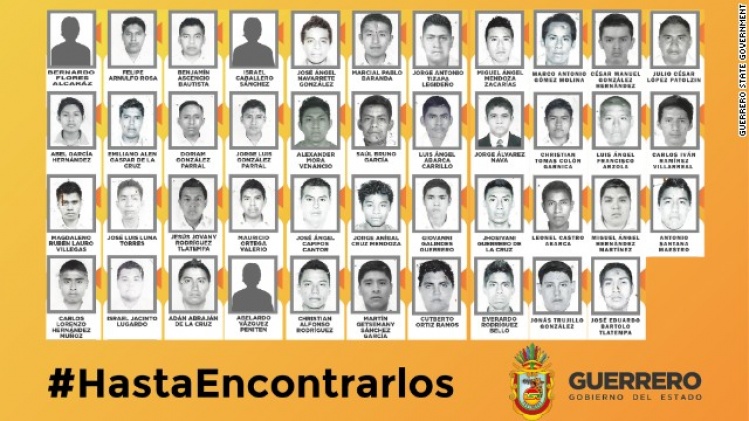 Francisco Goldman (the New Yorker) and Alma Guillermoprieto (the New York Review of Books) are among the journalists who in ongoing reports not only continue to monitor the latest developments in the case of forty-three missing (and all but confirmed dead) students from the Mexican state of Guerrero, but also work to frame the events within a particular political and economic context, which is characterized mainly by government corruption, poverty, and the rampant and indiscriminate violence of drug gangs.

The basic details: In late September, the students were abducted from one of the nation's poorest vocational schools, reportedly at the behest of a local mayor and his wife who were concerned that planned protests by the students would interfere with or overshadow their own scheduled event. According to the government, the abductees were then turned over to a gang related to the mayoral couple, who killed the students, burned their bodies, and dumped their ashes in a river. The national outcry has been such that Goldman wonders whether the case is "spark[ing] a revolution," while Guillermoprieto notes "the marches, vandalism, protests, petitions, and shame too, as the government sinks in disgrace, its inability to guarantee the safety of its citizens or prosecute its criminals more evident by the hour."

Still, three months have passed since the kidnappings, and forensic confirmation that remains discovered are in fact those of the students has been slow in coming. Parents and families of the missing have appealed for Pope Francis's intervention in urging Mexican President Enrique Pena Nieto’s government to properly search for the missing students, and at a December 21 Mass in the town where the college is located, Papal Nuncio Christophe Pierre assured the gathered that "Pope Francis knows what's happening here." (Francis told a general audience at the Vatican in November, "I am with the Mexicans, those present and those at home, in this painful moment of what is legally speaking disappearance, but we know, the murder of the students.")

It was also on our about December 21 when a priest from a seminary on the outskirts of nearby Ciudad Altamirano, Gregorio Lopez Gorostieta, was abducted. He was missing for four days before his body was discovered, on Christmas, with gunshot wounds to the head. The motive and killers are unknown. Lopez Gorostieta is the third priest to be murdered in the southern part of Guerrero this year, one of whom was killed for reportedly refusing to baptize a gang leader’s child. Other priests have received death threats for refusing to perform "quickie" marriages or bless such items as automobiles, have been shaken down for protection payments, or have been targets of highway robbery attempts. One was briefly kidnapped after his preaching on "la familia" was misinterpreted by gunmen as an endorsement of a rival cartel by that name.

The Catholic Multimedia Center says Mexico is the most dangerous country in Latin America to be a priest; thirty-six have now been killed there since 1990, counting Lopez Gorostieta. Goldman notes that since 2000, one hundred and two journalists also have been murdered. These are among the quantifiable facts about violence in Mexico, but the numbers tell only so much and seem to have grown wearying besides. "The government offers to investigate, but nothing is ever known," a local priest named Jesus Mendoza Zaragoza recently told the New York Times. Or as Guillermoprieto puts it, in writing specifically about the missing forty-three: "Everyone knows what happens; no one understands why. ... What is this story we are trying to tell and cannot understand?"