We took an uncharacteristic winter break: seven days in Florida. New England weather has been mild, but today a winter storm is filling up the path to the house and the garden with wet, heavy snow. The air is white with it. Thirty-six hours ago we sat in eighty degree weather listening to the carillon at Bok Tower Gardens in Lake Wells, a nature retreat given to the nation by a publishing magnate.  The Spanish  Moss on the live oaks filtered the sun, palm trees and magnolias added to the canopy, and what are for us summer bedding plants bloomed in the borders. A garden Idyll. We went South not primarily for the weather but to stay with friends we had not seen in some time. They, of course, are displaced from here to there, from the North to the South, from the Winter to the perpetual – what? Semi-tropical cycle, one that is kind to old bones and poor circulation.

The farther south and west we travelled along the Gulf coast, the more of us there were, retired people happy in the warmth, the air conditioned cars, golf courses, and planned communities. And as the streets broadened, lined by palm trees and tidy grass verges, the screening walls grew longer, and the security gates became stately, almost elegant. If security is allied to uniformity, then the odd-one-out is by definition not uniform:  the pressure to fit-in is the atmosphere.

A designed development seems a massive civil engineering effort. In a flat land of high water tables any community that offers water features, golf courses, and a landscape design that gives way to views if not vistas that always hint of water, how are anomalous flooding storms controlled? The uniformity of the houses surrounded by restrictions on plantings (as well as by the restricting size of the lots) makes for a comparative sameness, a leveling uniformity.  How does one achieve distinction within limitation? Identity comes by way of comparison of small things. The landscape alters with the progress of the phases of development; apparent waste land is marked by the uprights of utility connections, green sewer links, and surveyors’ stakes. This land is my land, this land will be their land, if they can raise the money for the lot.

A crystalized moment: a shining, late model sedan, the passenger rear door framing a carefully dressed older woman wearing a cardigan that offset her pearls and her short white hair. Her gaze was distantly eager, clearly a spectator of the world opened to her by her window. I thought the foursome of which she formed one member was on the way to lunch, driving retirement to its leisurely rewards, and intent on joining or recognizing the many other foursomes in similar cars driving to inevitably similar destinations - All of them, us, happy in the end-of-days’ sun.

Memento mori. The irony of Florida is that every retirement community exists in a necessary denial, perhaps aided by the constant summer of the seasons. The December of life requires sun block. The reflecting mirror of the swimming pool had me fleeing from my image repeated again on the pool deck in the persons of so many others. We came home. The snow knows its own. 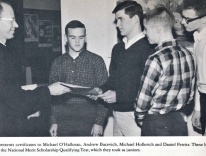