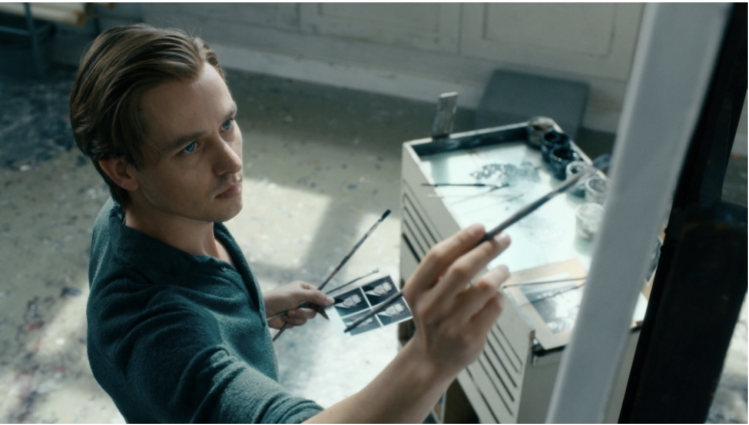 It would be hard to imagine a more auspicious directorial debut than The Lives of Others, Florian Henckel von Donnersmarck’s 2006 study of life in the German Democratic Republic, the Communist state that ceased to exist after German reunification. Donnersmarck never lived in the GDR, was never a Communist—his full name, Florian Maria Georg Christian Graf Henckel von Donnersmarck, betrays his roots in Germany’s aristocracy—and was just sixteen when the Berlin Wall fell in 1989. Yet somehow he managed a meticulous reconstruction not only of daily life in the GDR, but also of the complex psychology of an authoritarian surveillance state, where varying kinds and degrees of complicity, silent protest, corruption, victimization, and inner exile shaped the fates of citizens.

The Lives of Others follows a Stasi operative who becomes fascinated by the playwright-and-actress couple he’s assigned to spy on. Envious of their passion for the arts and for each other, he bit-by-bit undermines his own mission, fastening on the couple and inserting himself into their lives as part savior, part vampire. The movie’s drab settings harmonized with the bleak emotional landscape it surveyed, and the deftly orchestrated plot drew out a taut suspense that was both political and existential. Presenting a near-perfect fitting of cinematic matter to manner, the movie won an Oscar for Best Foreign Language Film.

After following this triumph with 2010’s The Tourist, a flimsy and much-derided Angelina Jolie–Johnny Depp vehicle, Donnersmarck has returned to familiar territory with Never Look Away, another foray into the dark recesses of modern German history. The story charts three decades in the life of a character based on the celebrated artist Gerhard Richter. Now eighty-six, Richter made his name as a painter of photorealistic portraits whose surfaces he blurred, creating a tantalizing kind of mirage that puts images in front of us and then complicates our access to their meanings. Richter himself has been famously reluctant to comment on those meanings, resorting to such gnomic utterances as “My paintings know more than I do.” Though the artist has disavowed the film, he granted Donnersmarck extensive interviews, and the biographical parallels could hardly be clearer. Like Richter, Donnersmarck’s Kurt Barnert is born in Dresden in 1932, lives through both Nazi and Communist regimes, and defects in the 1960s to the West, where he emerges as a leading figure in the art scene. Also like Richter, Barnert in childhood has a young aunt who receives a diagnosis of schizophrenia, and subsequently disappears into the monstrous maw of the Nazis’ eugenic medical system. 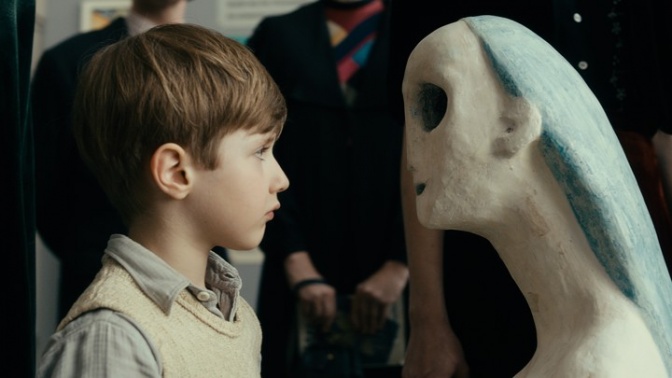 The relationship between sensitive lad and still more sensitive aunt is the takeoff point of the film. In a gallery in 1937 Dresden, five-year-old Kurt (Cai Cohrs plays him as a child, Tom Schilling as an adult) and his aunt Elisabeth (Saskia Rosendahl) tour the notorious art exhibition Entartete Kunst—“Degenerate Art”—in which the Nazis showcased what they considered the decadent cosmopolitanism of modern (and often Jewish) artists. The two take in Kirchner and Mondrian, Otto Dix’s World War I paintings, and George Grosz’s grotesque caricatures of members of the German ruling class, as a uniformed Nazi guide smugly lays out the creators’ alleged aesthetic depravity. As Kurt and Elisabeth linger in front of a Kandinsky, she leans over and whispers, “Don’t tell anyone, but I like it.”

Passionate, prone to spasms of artistic ecstasy, Elisabeth instinctively loathes Fascism, and on the day she is chosen as part of a youth-group parade to hand a bouquet to the visiting Hitler, she suffers a breakdown. That afternoon, Kurt discovers her sitting naked at the piano in the family living room; announcing her intention to “play a concert for the Fürher,” she rises and smites herself on the head with an ashtray, drawing blood. Soon the boy sees his aunt hauled away to an institution for the mentally ill, never to return. Elisabeth’s fate combines several strands of Nazi atrocity: the abuse of psychiatric diagnoses and facilities; mass forced sterilizations; and finally the outright murder of so-called unwertes Leben, or “lives without value.”

Donnersmarck propels the story forward in leaps, pausing to chronicle the firebombing of Dresden, then picking up the narrative in its postwar ruins, where we see the stout women known as Trümmerfrauen—the “rubble women”—laboring to rebuild the city brick by brick. Teenaged Kurt struggles to make his way as an artist. Beginning as a sign-painter, he eventually makes it to art school, where he encounters aesthetic judgments drearily similar to those that prevailed before the war—his teacher urging socialist realism while castigating Western art for its “obscene formalism” and neglect of the working classes.

Kurt has now also fallen in love with a spirited young woman named Ellie (Paula Beer). Little does he know that she’s the daughter of a former Nazi doctor and SS member, Karl Seeband (Sebastian Koch), a gynecologist who ran the very same sterilization program into which Kurt’s aunt disappeared. A prisoner in Russian hands after the war, Seeband saves himself by medically intervening to rescue the Soviet commandant’s pregnant daughter during a perilous delivery; freed by the grateful Russian, he soon insinuates himself into the ranks of the new Communist state, becoming just as ruthless a functionary as before. Pushing dramatic irony to the max, Donnersmarck puts these two unknowing antagonists—the struggling artist and the future father-in-law who victimized his beloved aunt—squarely in each other’s paths. Who will discover what, and how, and with what consequence? (This is presumably what Gerhard Richter meant when he complained that Donnersmarck had turned his life story into a “thriller.”)

For years I have admired the flexible and nuanced power of Sebastian Koch. He’s one of those actors who plays heroes and villains with equal ease: first the handsome and sympathetic playwright in The Lives of Others, and now, in Never Look Away, the brutal SS man. (Through his career he has played a range of Nazis, from the vicious to the suave, including Albert Speer.) Koch’s good looks, highly focused intelligence, and glamorous charm made him the perfect object of envy for the faceless and loveless spy in the earlier film, but now those same good looks become wholly sinister; late in the movie, Donnersmarck channels a disturbing childhood memory of Ellie’s, in which she spies her father—who believes himself alone—preening vainly in his SS uniform before the mirror. All of six seconds, the scene evokes a monstrousness that makes one shudder.

Whatever is alive in this film does not reside in its lectures.
sharetweet

With its epic scope and sprawling digressions, Never Look Away seems like an act of penance for the tight control Donnersmarck displayed in The Lives of Others. Where the latter succeeded through severity and pinpoint scrutiny, the former deploys extravagant colors and music, sweeping panoramas, and wild plot coincidences. Donnersmarck abandons the moral, ethical, psychological, and political ambiguity of the first film’s matrix of compromised human beings to offer a stark contrast of authoritarian brutality and the indomitable artistic spirit.

Such summaries suggest how dangerously close to cliché and sentimentality the film veers. Frequently Donnersmarck’s script falls back on profundities like, “Everything that is true is beautiful.” His portrayal of the 1960s art scene in West Germany approaches caricature; the young would-be subversives wantonly slashing canvases or painting their own naked bodies seem lifted from a Tom Wolfe–like takedown of artistic pretentiousness. Yet he does much better with Barnert’s struggle to find his own particular idiom. One affecting scene involves the head lecturer at the Dusseldorf art academy where Barnert has landed, a brusquely eccentric figure who works exclusively in grease and felt and is the object of bafflement among the art students. Sensing Barnert’s potential, the professor opens up to him, providing an account of the wartime tribulations that led him to work in the oddball materials he has chosen, and delivering a quietly urgent command for Barnert to stop chasing random novelty and seek instead to work within precisely those perilous zones of his life that move him, and hurt him, the most. The monologue carries an authentic strangeness and pain.

The portrayal of Barnert’s artistic breakthrough includes an added dimension—namely, the fact that some of the photos he’s reworking portray Nazis. (The paintings were done by Andreas Schön, a former assistant of Richter’s.) In a press conference at a gallery, Barnert disavows any political purpose, and the disavowal rings true. Yet the materials of his life, his particular intersection with dreadful history, include an awareness of evil—political evil—that comes out, however obliquely, through his work. In this sense Donnersmarck uses his portrait of the artist both as an example of, and metaphor for, the postwar project of Vergangenheitsbewältigung, or coming to terms with the past, that dominated German public discourse from the 1960s onward. This attaching of a colossal civic task to the private explorations of one artist significantly deepens both the meaning and the impact of Never Look Away.

In portraying an enigmatic and laconic artist repeatedly at odds with authoritarian regimes across the ideological spectrum, Donnersmarck makes the point that the authoritarian state is inherently philistine, that it relentlessly subjugates artistic creativity to its own political and social imperatives. Did we need to be reminded of that? Whatever is alive in this film does not reside in its lectures. Earnest, melodramatic, and sentimental, it’s also intermittently moving, with a visual sumptuousness created by six-time Oscar cinematography nominee Caleb Deschanel. Some films have a checklist of flaws yet move you anyway, and Never Look Away is one. Donnersmarck has pulled off quite a feat, making a film that is by turns obvious and elusive—much like the works of art that lie at its core.