‘The Wife’ & ‘A Star is Born’
By Rand Richards Cooper
Movies 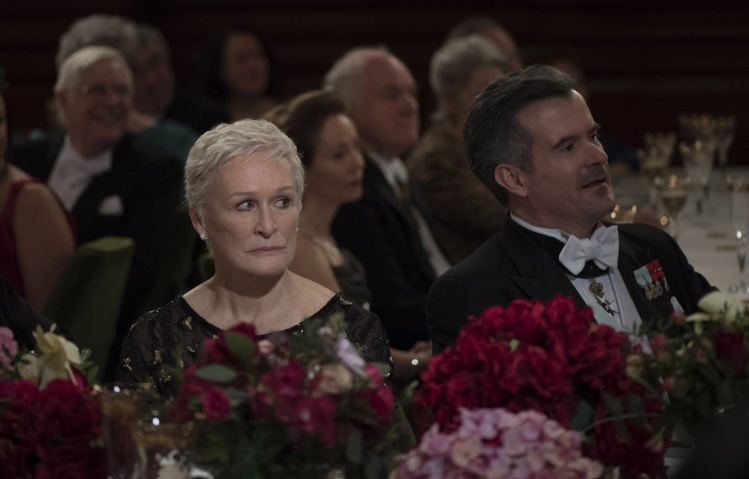 Glenn Close in The Wife

In a recent New Yorker review of three new books about women’s anger, Casey Cep glosses the laundry list of slights, abuses, and exploitations that inform that anger. “American women between the ages of eighteen and forty-four,” Cep writes,

are twice as likely as men to report feeling exhausted every day; women...make less money than their male colleagues; of the thirty highest-paying job categories, twenty-six are dominated by men, while women dominate twenty-three of the thirty lowest-paying categories; female patients are treated for pain less often than male patients who present with the same symptoms; one in four women lives with domestic violence; one in five women has been sexually assaulted; and two-thirds of women have experienced street harassment.

Shouldn’t women be more mad than they are? Cep notes new changes in our cultural take on women’s anger, and asserts that the issue “has grown steadily more prominent, and strikingly more personal, with the #MeToo movement.”

The Wife—adapted from a Meg Wolitzer novel and written by Jane Anderson—can be seen as a reflection of that prominence. Its opening sequences have the curious feel of a horror movie. As we follow a couple, Joe and Joan Castleman, undertaking a winter trip to Sweden, the soundtrack dishes out darkly dramatic music, and snowclad Stockholm is delivered via ominous overhead tracking shots of the type that often disclose, say, a body. Something is wrong. Something bad is about to happen.

In fact, the horror is male exploitation of women, and the female anger it engenders. The Castlemans aren’t just any seventyish American couple on a wintry Scandinavian lark. Rather, Joe (Jonathan Pryce) has been awarded the Nobel Prize in Literature, and as he floats on a waft of jubilation, we sense a far more ambivalent reaction in Joan (Glenn Close). It surfaces even as the couple receives the good news over the phone in their Connecticut house, and the representative of the Swedish Academy politely advises “Mrs. Castleman” to help manage the deluge of congratulatory calls that is about to descend on her husband.

That’s something a loyal wife is expected to do for her eminent husband, like organizing his pills every morning, or picking food out of his beard, or receding meekly into the background as he tells stories at parties. In Joan we see the familiar prospect of a woman practically vibrating with underrecognized, underutilized intelligence, an intellectual equal (or more) crammed into the role of helpmate. As the days pass in Stockholm, we witness her rising discomfort at the celebration of her husband—and especially his habit of garlanding his speeches with fulsome praise of her. Why does this make her feel so sick? Is it simply because, like so many famous and successful writers, Joe is an incorrigible philanderer, and indeed is flirting with the young female photographer assigned to cover his Nobel week?

As it turns out, the wife’s gall arises from more than just the husband’s cheating—that kind of cheating, anyway. A literary journalist and would-be Castleman biographer (Christian Slater) has glommed on to the Stockholm trip, and is pursuing an incendiary story: that Castleman is a fraud, and that it is his wife who largely created the works that made his name and fame. Could it be true?

The list of famous male writers who have over-relied on their wives—either for material for their fiction, or for actual material help in writing that fiction—is long and varied, from Bertolt Brecht to Dick Francis. Then there are men like Vladimir Nabokov, whose wife, Vera, in addition to taking care of his every domestic need, was also his typist, proofreader, editor, agent, secretary, business manager, and chauffeur. Where exactly do the Castlemans fit in this spectrum of exploitation? Via a series of flashbacks, first to Smith College thirty-five years earlier, where Joan is a self-assured and talented participant in Joe’s creative writing class, and later to New York City, where they are a newly married couple pumping their energies into his career, we explore the sources of her resentful angst.

To its credit, The Wife resists presenting Joe Castleman as a monster; he seems capable of real affection, and shares palpable joy at the birth of their grandchild. He even loves Joan, in some fashion. But his love of her is inextricable from his use of her. That’s the point. His monstrousness is routine; it’s business as usual. To bring it forward, director Björn Runge deftly deploys, in an appropriately literary way, a handful of motifs: the reappearance, in various contexts, of a walnut; quotations from James Joyce; the ubiquitous background presence of snow; a jubilant celebratory jump up on a mattress. These are the kinds of recurring themes that can give continuity and sweetness to a marriage over time—or, in the hands of a narcissistic spouse, create wounding ironies and festering betrayals.

The Wife is both polemical and educational; it’s the kind of film that seeks to let younger viewers know just how bad things were in the past (set in 1992, it looks back to the 1950s), and to draw an implicit line forward from that benighted era to its ongoing legacy today. But its real power lies not in the charting of institutional male dominance—scenes of male editors and publishers misogynistically yukking it up, casually insulting women writers, and so on—but rather in the picture of marital inequality, and the step-by-step undoing of the stoicism by which Joan has endured it.

Director Björn Runge is Swedish, and the film achieves a certain Bergmanesque quality in the closeups of Glenn Close, her own very Scandinavian face captured in a tight rictus of anger. Bergman called the closeup “the height of cinematography.” In its ability to reveal “a sudden thought” or capture the complexities of “mute silence,” he discovered some of cinema’s “most incredible and fascinating moments.” And indeed there is no end to the fascination of Close’s protean face in this movie, conveying disgust, regret, claustrophobia, anger, and love all at once, and through the smallest inflections of expression. The quiet marvel of her performance is amplified by Jocelyn Pook’s lugubrious soundtrack, with its brooding and obsessive intensity, reminiscent of Philip Glass’s theme in The Thin Blue Line.

It isn’t easy for a film to make big points about broad themes while staying true to the living, breathing nuances of actual people. But The Wife pulls it off, providing poignant insights into its characters while fashioning a capacious metaphor for gender-role inequity. Viewers will recall that Close made her big splash thirty years ago in Fatal Attraction, in a role whose allure was pure misogyny, a spurned woman deranged by jealousy. The actress is seventy-one, and over her long and productive career has won six Oscar nominations without once taking home the trophy. Given the subject matter of The Wife, the (largely male) Academy may tremble in its boots to withhold a seventh. The wheels of cinematic justice turn slowly, but grind exceedingly fine.

A Star is Born shares obvious ground with The Wife: both show a fragile male ego threatened by a greater female talent.
sharetweet

A telling moment occurs early in the newest remake of A Star is Born. Drunk at a party with his new girlfriend, Ally—whose meteoric rise as a pop star has just received the imprimatur of a top agent—blues rocker Jackson Maine (Bradley Cooper) takes a piece of cake and impulsively smears it on her face. Is the gesture playful and flirtatious, or passive aggressive? We see Ally’s look of bemusement as she tries to read his intentions. “Oooo, someone’s jealous,” she says.

A Star is Born shares obvious ground with The Wife: both show a fragile male ego threatened by a greater female talent. That said, the film’s appeal resides elsewhere than in the bitter calculus of exploitation and resentment. What is it that’s so undyingly attractive about the story of a jaded star chancing into a bar and discovering an unsung talent who later goes on to eclipse him? This is the fourth go-round, beginning with William Wellman’s 1937 hit, and still A Star is Born remains as seductive as ever.

Maybe even more than ever. Cooper performs serviceably as Maine, a man beset by so many inner demons that they seem to be strangling him from within. As for Lady Gaga in the role of Ally, those few Americans who haven’t seen much of her will be free to encounter her as an actor, and a good one at that—playful, brash, and alert to nuance. I loved the opening sequence, in which Maine, looking to get drunk after a taxing performance in L.A., finds a bar—a drag bar, it turns out—where he chances across Ally, costumed to the max and performing Edith Piaf’s “La Vie en Rose.” It’s an absolutely riveting, glorious rendition, campy and dazzling and sexy, and you may find yourself smiling as goofily as Cooper’s character.

Ally’s subsequent zoom to mass popularity raises one uncertain point. As her giant image appears on billboards, she submits to the ministrations of professional image-makers, donning wild costumes and lurid new hair colors, exchanging soulful ballads for amped-up dance numbers—in short, she becomes Lady Gaga. From a feminist perspective, pop entertainers like Madonna or Lady Gaga, who become powerful and wealthy by peddling caricatured images of female sexuality, raise complicated questions. It’s unclear what A Star is Born is saying about Ally’s mass popularity. Is it a kind of selling-out? Or simply the way that success inevitably—and admirably—proceeds?

While one film moves toward depths of anger and the other sorrow, both The Wife and A Star is Born showcase talented women whose husbands self-destruct—leaving them in mourning, even as they are freed to thrive.

Death of an Old Hand