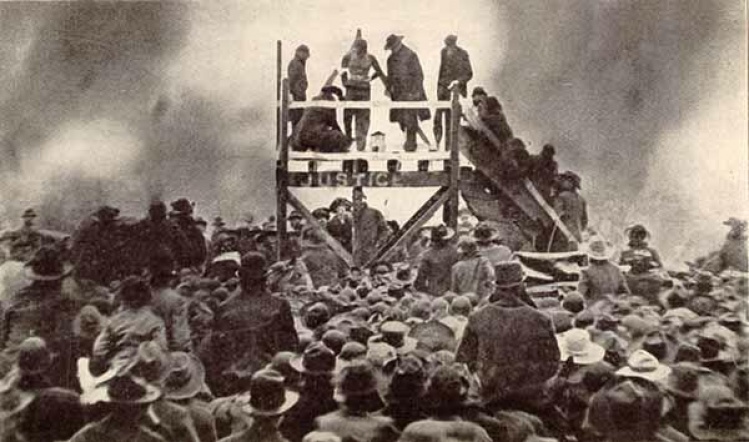 In a remarkably intemperate column published earlier this week at First Things, Robert P. George describes the "lynch mob" that he believes to be targeting opponents of same-sex marriage in the United States:

The lynch mob is now giddy with success and drunk on the misery and pain of its victims. It is urged on by a compliant and even gleeful media. It is reinforced in its sense of righteousness and moral superiority by the “beautiful people” and the intellectual class. It has been joined by the big corporations who perceive their economic interests to be in joining up with the mandarins of cultural power. It owns one political party and has intimidated the leaders of the other into supine and humiliating obeisance.

For the record, here's an account of a real-life lynch mob:

The scene at Macon Road near the bridge on the day of the lynching was like a "holiday" according to one newspaper, many people having stayed overnight. In the morning hundreds of men, women, and children gathered, and by 9.00 a.m. the road was packed with automobiles. A total of about 5,000 people attended the event, which had a carnival-like atmosphere according to Goings and Smith. Spectators bought soft drinks, sandwiches, and chewing gum, women wore their best clothes, and parents excused their children from school. One teacher at a school had 50 boys absent. Because of examinations, some county schools closed early, allowing the children to attend. Two trucks of drinks sold out swiftly, and sales of sandwiches and chewing gum were high.

Having arrived separately to Persons at about 9.00 am, Rappel's mother gave a speech: "I want to thank all my friends who have worked so hard on my behalf ... Let the Negro suffer as my little girl suffered, only 10 times worse"—sentiments which were echoed by the crowd. Persons was chained down, had a large quantity of gasoline poured over him, and set alight. The leader of the group had asked Rappel's mother if she wanted to light it; she declined, but said she "wished Persons to suffer the tortures he dealt to his victim". Persons was reportedly calm and casual, and made no sound except for a "faint pig squeal" when set alight. Mays said he stood close to his head "in spite of the African odor" and watched the whole performance. Members of the mob tried to help women who could not see get a better view, but they failed because of the sheer numbers. While Persons was burning, spectators snatched pieces of his clothes and the rope used to bind him. A newspaper described the moment of the lighting: "A crowd of some 5,000 men, women and children cheered gloatingly as the match was applied and a moment later the flames and smoke rose high in the air and snuffed out the life of the black fiend."

Persons' body was decapitated and dismembered, and his remains were scattered and displayed across Beale Street—the centre of the African American community in Memphis—where his head was thrown from a car at a group of African Americans. According to Charles W. Cansler, a spokesman for the local black community, his head was thrown into a room which contained black doctors. His remains were taken as souvenirs, and photographs of his head were sold on postcards for months after the event. The Commercial Appeal's headline the day after the lynching read: "Thousands cheered when negro burned: Ell Persons pays death penalty for killing girl", and their editorial on 25 May described the lynching as "orderly. There was no drunkenness, no shooting and no yelling."

And here's an account of George's "lynch mob" at work in Indiana:

Kevin O’Connor tells TMZ he's had to temporarily close his business after he told a reporter he would refuse to cater a gay wedding under Indiana's new Religious Freedom Restoration Act. O'Connor says he was immediately flooded by threatening phone calls, and social media postings.

O'Connor wants to clear up one thing: He says he would never deny service to gay people in his restaurant. However, due to his religious beliefs, he does not believe in gay marriage ... and that's why he wouldn't service one.

Meanwhile, he says the threats have been serious enough that he's closing his pizza joint ... at least until the dust settles.

Drawing an analogy between these activities is not merely tone-deaf, inflammatory, and offensive, though of course it is all those things too. More importantly, it cheapens the suffering of those who endured, and continue to endure, extra-judicial violence and brutality because they happened to be born with skin of the wrong complexion. And as Paul Horwitz wrote earlier this week, this is exactly the sort of hyperbole that the public debate over religious freedom needs to do without.

I know, I know, the base needs its red meat. And there is room for serious criticism of the Left's position on religious liberty, and on much of what's been done to silence and punish their opponents. But if what it is to "stand shoulder to shoulder, and arm-in-arm" with George and his allies is to compare inconvenienced pizza shop owners to dead black boys, and angry posts on Facebook to cheers at the sight of their burning bodies, then I am going to count myself out.