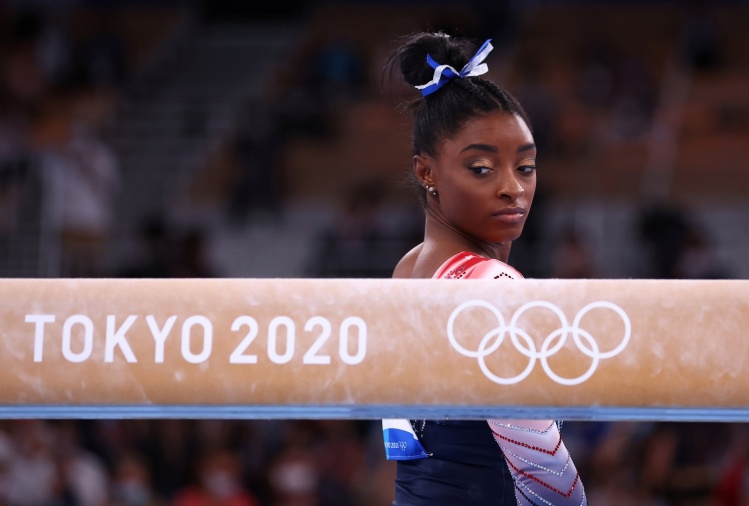 If someone were to task me with creating a documentary about the 1990s based wholly on my own memories of the decade, at least half of it would be footage of the women’s gymnastics competition at the 1996 Summer Olympics in Atlanta. It left such an impression that even now, a quarter of a century later, I can still recall lying on my great-aunt’s shag carpet in front of an oscillating fan, chin propped in my palms, wide eyes fixated on the boxy wooden television set. I was nine years old—still young enough to see myself in the athletes on the screen, to dream my wildest dreams through them. In front of the bathroom mirror, I belted out Gloria Estefan’s “Reach,” the signature ballad of the games, and waved my arms above my head in imagined ecstasy. I pretended my Odyssey of the Mind State Competition medal was an Olympic gold. Alone in my room, I bowed low to solemnly drape it around my own neck.

Like millions of kids who came of age in the ’90s, one moment from that summer reigns supreme in my memory: Kerri Strug’s final vault in the women’s team gymnastics competition. The moment is so iconic that it barely requires a summary: Strug, the final gymnast to compete in the final event of the competition, badly injured her ankle while landing her first vault. But one more vault remained. Wincing in visceral pain, she summons the heart of a champion, dashes down the mat, executes her routine to soaring perfection, and sticks her landing on one foot. Her heroism and determination secures gold for the Magnificent Seven. It was a triumph.

At least, that’s how I remembered it.

When Simone Biles abruptly stepped back from the Olympic gymnastics team and individual all-around competitions in Tokyo last week, citing concerns over her mental health, I—like much of the nation, it seems—found myself revisiting footage of Strug’s vault.

When I watched it this time, I felt nauseous.

After landing the second time, Strug is scooped up and carried off the mat by the now-infamous coach Béla Károlyi, who with his wife, Márta, helped to create a U.S. women’s Olympic dynasty through a training regimen that was apparently heavily reliant on emotional abuse, dangerous training methods, and isolation of the young athletes from their parents and guardians. Károlyi places Strug into the arms of none other than team doctor Larry Nassar, a man now revealed to have sexually abused hundreds of gymnasts over almost two decades. At 4’7”, passed from one abusive authority figure to the next, Strug looks almost like a doll, an object.

As a child projecting my own Olympic fantasies onto Strug, I had assumed she exercised a high degree of personal agency. When I revisit that moment now, such agency seems to be mostly a product of my imagination. Could she have refused to compete on an injured ankle? Could she have actually said no? Everything we now know about Nassar, Károlyi, and USA Gymnastics (USAG) during those years suggests that she could not have. Rather than a star athlete boldly resolving to push through her pain for the sake of the team, what I see now is a teenager whose health and safety were treated as collateral damage in a drive for national and institutional prestige.

Institutionalized structures of abuse begin to crumble when we give ear to the voices that dare to challenge them.
sharetweet

She didn’t choose to sacrifice. She was the sacrifice.

Watching the ostensible warmth and camaraderie of the U.S. gymnasts and their coaches today, I can almost forget that these athletes are competing in the shadow of a searing sexual-abuse crisis. Nassar abused an entire generation of girls and young women in the sport while USAG officials and other authorities looked the other way. Victims were silenced, threatened, and abandoned by those in positions of trust. The culture of abuse within the sport was an open secret among seemingly everyone with the power to stop it. It took an exposé in the Indianapolis Star, the courageous public testimony of survivors, and state and federal criminal investigations to begin to uncover and unravel the web of abuse.

All of this should sound eerily familiar to Catholics, of whom Biles is one. What can the Church learn from her witness?

The first is a lesson for the Church as an institution. In an April interview with NBC’s Hoda Kotb, Biles reminded viewers that she is the only remaining survivor of Nassar’s abuse still competing on the U.S. team. Her decision to press on in the sport, she explained, came in large part from a desire to use her high profile to prevent USAG from sweeping the abuse crisis under the rug—to continue to hold those in power accountable for perpetuating a culture of abuse. In fact, it was only in 2018, after Biles publicly lamented the prospect of returning to the same training facility where she was abused, that USAG finally and permanently shut the facility down. In this sense, within the sport, she has assumed the role of prophet, publicly calling the institution to account and refusing to simply go away. In her interview with Kotb, Biles described feeling called by God to be a “voice for the younger generation.” Institutions need prophets. Institutionalized structures of abuse begin to crumble when we give ear to the voices that dare to challenge them—especially the voices of Black women, whose liberating work has been too long taken for granted.

The second is a lesson for the Church as the People of God. Beneath Biles’s decision is an ethical and theological through line with deep resonances in womanist theology. A womanist, wrote Alice Walker in her 1983 classic, In Search of Our Mother’s Gardens, is a Black woman who “loves herself. Regardless.” As a white woman raised in a society that chronically equates human worth with productivity, I admit that Walker’s words have always proven a stumbling block for me. (Which, of course, is no accident.) On that marrow-deep level that lies beneath mere intellectual comprehension, I’ve always known that there were things I did not understand—could not understand—about what Walker meant, and about what my Black colleagues who embrace womanist theology today mean when they invoke Walker’s words.

Last Tuesday, Simone Biles helped me to understand what womanist theologians mean when they underline that final term: regardless. Faced with unimaginable pressure, memories of trauma, and doubtless many other factors that are only hers to know, Biles refused to “power through”—a decision that, in all likelihood, spared her from serious physical injury. This refusal was a “no” to the sanctification of grit. Even more, it was a “no” to the legacy of abuse and objectification faced by both U.S. gymnasts and Black women. Defying the expectation that she sacrifice her health, safety, bodily integrity, and psychological well-being for national prestige and institutional reputation, Biles chose instead to do for herself what USAG repeatedly failed to do on her behalf: treat her mind and body with the care it deserved.

As many try to imagine a future for the Church beyond its own culture of abuse, the example of fellow Catholic Simone Biles merits both empathy and attention. She teaches us that an institution complicit in perpetuating abuse does not get to dictate to survivors how they heal, or where, or when. She teaches us that the best thing any wounded institution can do is to heed the voices of its prophets—those who relentlessly refuse it the luxury of just moving on. Finally, Biles teaches us the power of love. Her interview with Kotb suggested that at the root of her persistence in professional gymnastics lies a profound sense of vocation, the Godly call of love within concrete reality. Biles loves her sport, her team, and the generation of young women and girls who look to her as an example. And on Tuesday, in front of the entire world, Biles chose to love herself—regardless.