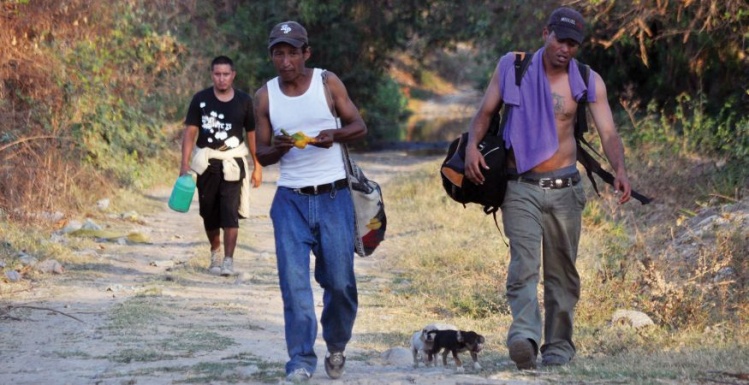 José and Jorge approach me while I’m standing outside a small shelter for Central American migrants in La Patrona, Veracruz, and ask if I can give José my shoes. I say I’m sorry but I can’t; I need them. Besides, the top of José’s head barely reaches my shoulder, and his feet would swim in my shoes. If I had given him my shoes, he surely would have stuffed the toes with newspaper or toilet paper, which is what he’s using now to keep the straps of his sandals—themselves a couple sizes too large—from scraping any more flesh off the tops of his feet. After I tell him no, José says he understands and walks away, limping slightly, pained by feet rubbed raw by weeks of walking to America in those sandals.

José and Jorge are Salvadorans and, like hundreds of thousands of Central American migrants, they’re fleeing countries plagued with entrenched poverty and violence. They’re traveling through Mexico on their way to the United States. Until recently, they would have made the trip riding on top of cargo trains collectively called La Bestia (“the Beast”). But now, most of these trains have only a handful of migrants and many have none. It isn’t that there are fewer migrants. It’s just that they’ve been forced to find other, more dangerous routes because of Programa Frontera Sur, a Mexican policy implemented last August, under pressure from the U.S. government, that’s made it almost impossible for migrants to board trains. Instead, many of them are walking most of the way from Central America to the U.S. border. For one stretch of the journey, Jorge walked for twenty days straight. “Three in the morning until six at night,” he says. “Forty to forty-five kilometers a day” (twenty-five to twenty-eight miles).

It’s estimated that about four hundred thousand Central American migrants enter Mexico each year. The overwhelming majority plan to enter the United States. Most come from Guatemala, Honduras, and El Salvador—three countries with extremely high poverty rates (53 percent of Guatemalans, 41 percent of Salvadorans, and 67 percent of Hondurans are poor). But as bad as the poverty is, it’s the violence that’s driving people out. Honduras has the world’s highest murder rate, El Salvador the fourth highest, and Guatemala the fifth. Much of the violence in all three countries is perpetrated by gangs like the Mara 18 and Mara Salvatrucha—the most vicious gangs in the Americas.

Cristina is a forty-year-old Salvadoran I met while she was staying at Hermanos en el Camino, a shelter in Ixtepec, Oaxaca. She had a small bee-keeping operation in El Salvador and, while she certainly wasn’t rich, she was earning enough to support herself and her five sons. But one of the gangs (she didn’t say which) evidently thought she had a lot of money. On January 27, someone called and said she had until January 31 to pay them $1,000. “If I did not pay, they would kill one of my children,” she told me. “I left the next day at dawn.... I have no reason to be a migrant. I have a nice business, workers, and suddenly I lost everything.” In addition to extortion, gangs forcibly recruit young men. A refusal results in gang reprisals; often, either the young man himself or someone in his family is murdered. Because of this, Cristina took her eighteen-year-old son with her to Mexico. She was frightened the whole time. “In Salvador, they do not talk, they kill. We were afraid we would be pursued and killed.” Cristina and her son made it across the border into Mexico and almost as far as the shelter without any serious incidents. But outside of Juchitán—about a forty-five-minute bus ride from Ixtepec—they discovered that gangs and thieves aren’t the only dangers for a migrant.

According to the Mexican government, Programa Frontera Sur will make migrants safer by keeping them from risking their lives on La Bestia and by protecting them from criminal groups. To keep the migrants off the trains, more police and agents from Mexican Immigration (INM) guard train stations. Train speeds have been increased to make it harder for migrants to climb aboard while the trains are in motion. And there has been an increase in operativos—operations where police and INM agents stop buses and trains, detaining anyone they suspect of being a migrant.

The bus Cristina and her son were on was stopped by four policemen. Two boarded the bus while two waited outside. If they thought someone might be a migrant, they asked for an ID; if the person didn’t have one, he or she was taken off the bus. Cristina was lucky: the police didn’t ask her for an ID. But they did ask her son, and he and six other migrants were taken off the bus. “The police asked for money,” she says, “and since he didn’t have any, they brought him to Immigration.” There he faced deportation. As soon as Cristina reached the shelter, she asked for help. Alberto Donis Rodriguez, the shelter’s coordinator, hurried to the INM office. “Only Immigration can ask for identification,” says Donis Rodriguez. “It is not legal for police or soldiers to do it unless they are working with Immigration.” He argued that the migrants should be released because they had been seized illegally, and he was certain they would be. When I bumped into Cristina on my last day at the shelter, she was smiling for the first time. Her son was to be released that day. But later she learned that, instead of being released as scheduled, he had been deported.

RAILROAD COMPANIES ARE also doing their part to keep migrants off trains. Along train tracks that run behind a shelter called La Sagrada Familia in the northern Mexican state of Tlaxcala, small cement poles have been installed to keep migrants from running alongside trains and climbing aboard. Several migrants have been injured after being struck by a pole as they clung to the train. At least one was killed. The train companies are also placing private security guards called custodios on trains. The guards, who dress all in black and wear masks, are supposed to protect the trains and their passengers, but many migrants and advocates report that custodios are preying on migrants.

Ronald Isaac Varaona Saucedo, a twenty-three-year-old Honduran who spent a couple of days at La Sagrada Familia on his way to the United States, had a run-in with custodios on his way north. “They made us get off the train. They threatened us with guns. They said, ‘Give us all your money.’ I gave them two hundred, three hundred pesos [about $14 and $21 respectively]. This was all my money. I was left with no clothes, only pants.” He and some friends walked to the next village, where they were given clothes and shoes.

The Mara 18 and Mara Salvatrucha are also doing their part to make it harder for migrants to ride the trains, charging them $100 to board—a fee most migrants can’t afford. Those who do manage to pay the fee are sometimes robbed on the train by the same gang that charged them to board.

Because it’s now more difficult to ride La Bestia, migrants are making the journey in other ways. Some travel by bus or van, but most walk. This leaves them more vulnerable to assaults, robberies, and rapes. “When people were coming by train, it was dangerous, but it kept migrants together,” says Daniel Ojalvo Cordero, who has worked at Hermanos en el Camino for two years. If gangs wanted to assault them, “it had to be a big group, had to be organized. Now, [the migrants] arrive walking in small groups and anyone can assault them.”

Almost all the thirty-five migrants I interviewed told me they had been assaulted during their journey. A man named Juan was traveling with his uncle and brother when they were assaulted and robbed of all of their money in Oaxaca. Carlos and his nephew Miguel were robbed in Tierra Blanca, Veracruz. Luís was robbed outside of Tenosique, Tabasco. In many of the cities along the main routes from Central America to the U.S. boarder, migrants are begging on street corners, holding up their passport with one hand, while holding out their other hand for change.

Programa Frontera Sur, with help from criminals and train owners, has certainly succeeded in keeping migrants off the trains. But it has failed spectacularly in keeping migrants out of Mexico. Rubén Figueroa, the coordinator of Movimiento Migrante MesoAmericano, an organization that defends migrants’ rights, insists that “the same number are entering Mexico.” Pedro Ultreras, a journalist who has covered migration through Mexico for several years, agrees: “Nothing is stopping people at the southern border. The door is wide open. They just wade across the Suchiate River.”

The dramatic drop in apprehensions of Central Americans at the U.S. border is being touted as proof of decreased migration. In fact, just as many Central American migrants are reaching Mexico. The difference is that the Mexican government is now deporting more of them back to their countries of origin before they reach the U.S. border. According to information released by the Guatemalan government, Mexico deported almost 50 percent more Central Americans between January and March 2015 than it did during the same months in 2014.

People will continue migrating north until conditions in Central America improve. People like Alberto and Maricella Delgado, who spent a few days at a shelter in Chahuites on their way to the United States. They rode La Bestia until they were chased off by INM agents. Later, as they were walking along the tracks, they were robbed of their backpacks and all their money by three men with machetes and a gun. But still they continued. “I have a lot of fear on this trip,” Alberto told me. “It is too dangerous for my wife. But we have to do it. We have a child and want a better life for him.”

This article was supported in part by a grant from the Puffin Foundation. The author wrote a longer article on the same subject for the June 2015 issue of In These Times. 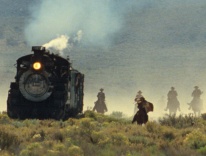 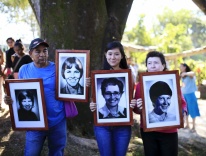