Maimed by the Beast 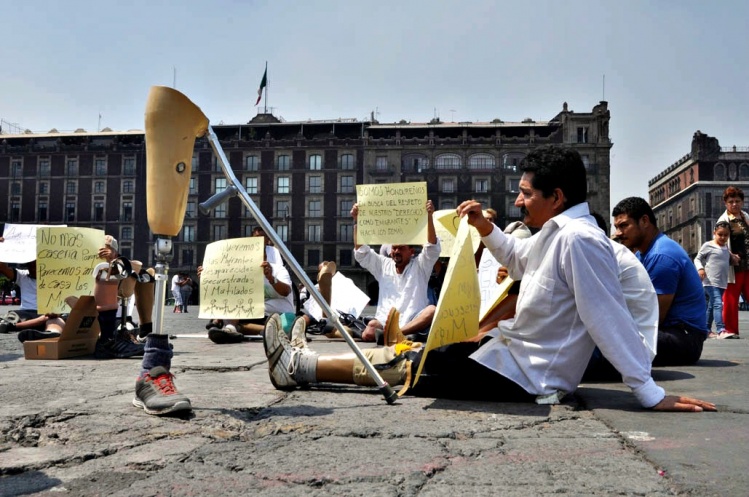 A group of seventeen Honduran men are currently traveling through Mexico in La Caravana de los Mutilados (“the Caravan of the Mutilated”). They are all members of Asociacion de Migrantes Retornados con Discapacidad (AMIREDIS), an organization for migrants who have lost a limb while traveling north toward the United States on the train they call La Bestia. They hope to cross the U.S.-Mexican border by the end of the month. Along the way, they’re holding protests and meetings to warn people about the dangers of riding the train. They also hope to pressure their government to help any Honduran maimed by La Bestia.

About four hundred thousand Central Americans enter Mexico each year. Although some will stay and work in that country, the majority are hoping to make it to the United States. Many of these ride on top of the cargo trains as they speed through Mexico. La Bestia is aptly named: its migrant passengers are attacked by gangs, kidnapped by drug cartels, and robbed by police and local criminals. Women who ride La Bestia are raped at alarming rates.

But migrants still ride the train because, according to Padre Elías Dávila Espinoza, the director of the shelter for migrants in Apizaco, La Bestia is the cheapest option. “Organized crime, Maras [the most violent gang in Mexico], vigilantes are all there and in spite of this, they still ride the train.”

As for why so many Hondurans are migrating in the first place, the reason is straightforward: There’s little hope for them at home. “I did an investigation of youth in Honduras and they believe they have no options,” said Olivia Dominguez Prieto, a professor at Mexico City’s Instituto Politécnico Nacionál who’s accompanying the seventeen members of AMIREDIS during their stay in Mexico City. “Many join organized crime…they cannot go to the university, there is no work. Or if there is, it pays little.” So they risk life and limb for a chance at something better.

Like millions of Central Americans, José Luís Hernandez Cruz, AMIREDIS’s president, couldn’t find work that paid well in Honduras. So in 2004 he decided to make his way to the United States. “For Central Americans, the United States is like the promised land,” he said. And, like millions of Central Americans, he traveled through Mexico on La Bestia, planning to cross the U.S. border illegally. His first attempt ended early when he was caught by Mexican Immigration officials in Oaxaca and deported. A year later, he was ready to make another attempt, this time with a friend, and once again he rode La Bestia. He got as far as Delicias, a city in Chihuahua about three hundred miles from the border. It was there that disaster struck. “I was hungry and thirsty and tired,” he said, speaking in a voice barely above a whisper. “I passed out and when the train shook, I fell off.” The train ran over him. He lost his right arm, right leg, and part of his left hand. “It was a miracle I survived,” he said. “Somebody from the Red Cross happened to be driving by and found me and took me to the hospital.” He spent two years in three different hospitals in Mexico and was eventually deported to Honduras. Now, he and sixteen other Hondurans maimed by accidents that took place as they were riding La Bestia have formed La Caravana de los Mutilados, hoping to raise awareness about the dangers migrants face.

The twenty-five members of AMIREDIS meet weekly in El Progreso, Honduras. “Some could not make it [on La Caravana] because they did not have the money,” said Adám Escobar Ceballos. Ceballos, a thirty-nine-year-old with the physique of a bodybuilder, lived in the United States for nine years, working construction jobs in Houston and Minnesota. He was deported in 2003 and, a year later, wanted to return to Houston where his eighteen-year-old son lives. On that trip, he fell off the train, losing his left leg.

All of the caravan’s participants are men, but Ceballos said one or two women attend the meetings back in Honduras. “There are no women with us because they had to care for their children,” he explained. The caravan left Honduras on February 24, stopping for a few days at migrant shelters in Tapachula and Ixtepec before arriving at a shelter in Mexico City on March 5. They’re taking buses, paying for them with money from family and friends and donations from strangers.

La Caravana de los Mutilados has several goals. “People need to know about us,” said Ceballos, “about what can happen on La Bestia.” Members of AMIREDIS tell people not to risk the trip. They also hope that publicity from the caravan will put pressure on their government to give them some aid. “We get no help from the Honduran government,” said José Alfredo Orea Santo, who used to work in banana fields. He can’t do this work anymore because he lost a leg when he tried to climb onto a moving train. “I tried to grab the ladder, the second rung, but I couldn’t hold on and I fell face down. I tried to get up and when I did I saw that I didn’t have a leg, the train had run over it.” Santo does, however, work. “I make piñatas, fix cell phones, but I earn very little.” Still, he’s more fortunate than some of the men in the caravan.

Wilfredo Filio Garri used to drive a taxi in Honduras but wasn’t earning enough to support his wife and four children. In 2010, he decided to migrate to the United States. He lost his left leg when he fell off the train. Now he can’t even drive a taxi. “I basically beg in the streets for money,” he said. “My children don’t help me, they have their own lives. They love me but they can’t help because they have their own problems.”

This is actually the group’s second caravan. The first was last year and made it only as far as Mexico City. But this one has a more ambitious and perhaps quixotic goal. “We want to see Obama so he can know the nightmare that immigrants face,” said Cruz, “ask him to help generate jobs in Honduras so we can stop migrating.” How the seventeen men will get across the border, let alone reach Washington, D.C., is unclear. The group has met with José Mariano Castillo Mercado, the Honduran ambassador to Mexico, and asked him to provide passports as well as some funding so that the caravan can continue north of the border. Mercado told them he couldn’t provide the passports for free—the men can’t afford the $60 fee—and he has no funds to give them for their journey. Ceballos said he wasn’t sure what the group would do now, but he thought they’d at least consider crossing into the United States illegally.

Pedro Ultreras, a Mexican journalist who covers migration, has followed the caravan from Honduras, meeting with the men’s families. “Their children want to migrate in spite of the accidents these men had,” he said. “It’s really their only option. The idea is always to get to the border.” Understandably, the men strongly oppose that. “[My children] want to migrate but I won’t let them,” said Santo, who has three children. “I don’t want the same thing to happen to them. I don’t want them to suffer.” But with so few alternatives, it’s hard to dissuade them.

One Saturday afternoon, the caravan visited the zocalo, Mexico City’s main square, and traditionally a site of public protest. The men formed a small semicircle near the flagpole in the center of the zocalo and held up signs describing their plight. They collected some donations and talked with people who stopped to ask questions. Normán Saúl Varela held a sign that read, “We are Hondurans looking for our rights to be respected.” He worked as a carpenter before La Bestia took his leg. “Now I have nothing,” he said, “no work because there are no opportunities for people with disabilities. No one will hire me or help. We don’t have a house.” When asked where he lived, he paused for some time. “That answer is hard,” he finally answered slowly. “We live in the street, my wife and children…. In Honduras, the only place for us is the graveyard. We are like ghosts in our country. No one can see us.” The hope is that the caravan will at least make these men visible—and that, once they’re seen, it will be easier for them to get the help they need.