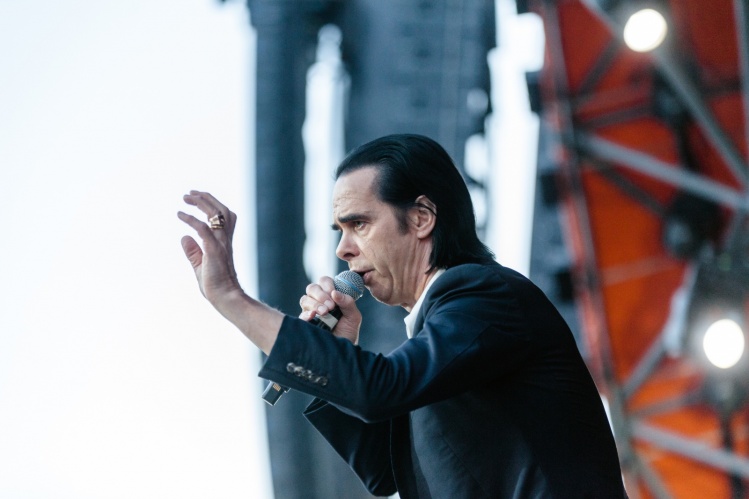 Over three decades, the Australian musician Nick Cave has turned out a genre-spanning body of work, from the snarling hellfire in the goth-punk of his early years to the piano ballads and gospel-inflected romps of the early 2000s, and then the ambient, ethereal soundscapes that have characterized his last three albums. Yet whatever the style, Cave’s music takes on the most elemental aspects of human life—love, grief, sex, death, sin, redemption—plumbing the depths of our worst impulses and reaching up to explore our best. Cave says that his songs are expressions of a longing for love and healing, for an encounter with God. In the end, his songs are “all the same thing—lifelines thrown into the galaxies of the divine by a drowning man.”

In July 2015, Cave’s teenage son Arthur died suddenly in an accident while the singer and his band, the Bad Seeds, were recording the album Skeleton Tree. Cave quickly wrapped up work on the record and retreated from the spotlight, insisting on his family’s privacy. Only after three years did Cave complete a new album: Ghosteen, released in October 2019. It seems to be the lifeline Cave tossed out amid his grief. He takes up his familiar preoccupations of love, loss, and death, but with a tenderness that makes it sound desperately personal. If writing these songs of yearning is, as Cave has written, “the light of God, deep down, blasting up through our wounds,” Cave is tearing himself wide open to let it pour out.

Ghosteen is clearly his most personal exploration of death, but the probing of wounds is not new territory for Cave. His songs have always been dark, bloodstained and sometimes apocalyptic in their menace, yet limned with mercy for the broken, sidelined sinners he sings about. Cave’s work is famous for its pervasive Christian imagery, and if generally unorthodox it nonetheless points to something true: the sin and perversion that can exist in the human heart, but also the plentiful grace of a broken world.

Take “The Mercy Seat” from the 1988 album Tender Prey, in which a convicted murderer is led to the electric chair. In his final moments he conflates the chair with the Ark of the Covenant, the manger, and the cross of Christ; he yearns for a time when there will be no more “weighing of the truth” and he will cease to be judged by the rule of “an eye for an eye and a tooth for a tooth.” He waits instead for the “ragged stranger” Christ, hanging in death with him. Or “God Is in the House,” a piano ballad from 2001’s No More Shall We Part. The narrator mocks a conventionally respectable Christian town where “there is no place for crime to hide.” Instead, “At night we’re on our knees / As quiet as a mouse / For God is in the house.” The townspeople have deficient imaginations, and their concern for propriety makes them blind to the wounds of “the tipsy, the reeling, and the drop down pissed” with whom Jesus associated. God is in the house, but “I wish he would come out,” Cave sings.

Many of Cave’s older songs are similarly narrative in form, sounding almost like folktales. One of the best known, a duet with pop star Kylie Minogue, is “Where the Wild Roses Grow,” which tells the story of a man pursuing a woman only to kill her because, as he sings, “all beauty must die.” In “DIG!!! LAZARUS DIG!!!” a freshly resurrected Lazarus wanders today’s world followed by paparazzi, unsure of what to do with his new life as he descends into sin and madness. “Larry grew increasingly neurotic and obscene / He never asked to be raised up from the tomb!.... He ended up like so many of them do / Back in the streets of New York City / In a soup queue, a dope fiend, a slave / Then prison, then the madhouse, then the grave / Oh poor Larry!”

The layering of such fantasies—hallucinations?—creates a disorientation that can seem to mimic grief.
sharetweet

Recent work from Cave has grown less rollicking, tending toward muted tones as synthesizer and strings supplant banging keyboard and ringing guitar and straightforward storytelling gives way to impressionistic imagery. But Ghosteen is the most otherworldly of Nick Cave and the Bad Seeds’s seventeen studio albums; you might not even call it rock anymore. The title refers to “a migrating spirit,” Cave has said. The first eight songs are identified as the “children,” and the final three are two “parent” songs split by a spoken-word track. Throughout, Cave’s voice takes center stage, in a falsetto that he has rarely dared before, surrounded by sweet, drifting harmonies that often turn cloudy. There is almost no percussion on the album to keep the listener tethered; one floats, dreaming, remembering, and grieving Arthur’s death along with Cave. Much of the “action” seems to be set in the fearsomely fecund forest depicted on the album’s cover. Flaming horses run through the fields, galleon ships sail across the sky, children climb toward the sun. But then come everyday moments: watching traffic from a hotel room, listening to the radio at the kitchen table, waiting for a train, driving to Malibu.

The layering of such fantasies—hallucinations?—creates a disorientation that can seem to mimic grief. Cave said as much in the documentary One More Time with Feeling after the loss of his son. “To do a fractured narrative where time is actually compressed, events are stuck on top of other events—there’s no particular logic to it, or a distressing kind of logic—makes it much more real, and true to the way I feel about things.” With events stuck on top of each other, seeing and feeling too many things at once, it’s hard to know if one is beginning to emerge from suffering or only just entering into it. But “peace will come in time,” Cave sings on the first track of Ghosteen, “Spinning Song,” trying to reassure himself as well as us.

In “Bright Horses,” the sweepingly gorgeous second track, the narrator is at first taken by the image of the freely running animals of the title: “They are horses of love, their manes full of fire / They are parting the cities, those bright burning horses.” But there quickly comes a turnabout of realization: “We are all so sick and tired of seeing things as they are / Horses are just horses and their manes aren’t full of fire…. And the little white shape dancing at the end of the hall / Is just a wish that time can’t dissolve at all.” In “Sun Forest,” the narrator watches children ascending a glorious spiral staircase into the bright sun. “Come on, everyone!” he exclaims, but just as quickly, he sinks into despair: “A man called Jesus, he promised he would leave us / With a word that would light up the night.... But the stars hang from threads and blink off one by one / And it isn’t any fun...to be standing here alone.”

The whole album feels like this: tentatively hopeful, upward-looking, but threatening to tumble down at any time. “Love’s like that you know,” he sings in “Ghosteen,” one of the “parent” tracks. “It’s like a tidal flow / And the past with its fierce undertow / Won’t ever let us go.” Images leap up unbidden, especially a dancing, “twirling” child, sometimes solid and real, and sometimes a wisp. “There is nothing wrong with loving something you can’t hold in your hand,” the narrator says. “There’s nothing wrong with loving things that cannot even stand.” The closing track, “Hollywood,” echoes the opener and brings us back to where we began: “I’m just waiting now for peace to come.”

Cave has done a lot while he’s been waiting, putting himself and his wounds out into the open to draw closer to others, including his wife. “It turns out that being forced to grieve openly basically saved us,” Cave said in an interview. After Arthur’s death, he embarked on a solo tour simply called “Conversations with Nick Cave,” live events in which attendees could ask Cave anything, and he promised to answer as honestly as possible. This grew into the Red Hand Files, an email newsletter in which Cave responds to questions that fans send in. Addressing a variety of topics—death, addiction, existential crises, the nature of art, God, #MeToo—Cave answers with sensitivity and generosity, entirely unironic about his need to give and receive love.

In one entry, Cave tells a story about a trip he and his wife took eight months after Arthur’s accident. He describes breaking down in tears on seeing a cat that had been hit by a car: “At that moment something ruptured…. Life was too much. It was literally impossible to bear. My son was gone. I would never see him again.” Seeing such suffering exterior to him, Cave writes, “The vision of the dying cat wrenched me from my own self-absorption and bitterness and isolation and loneliness and showed me that the world, in all its terrible wounded beauty, was in need of our urgent attention.”

Cave has spent a long career attending to a wounded world, sifting through the worst of humanity to find a glimmer of grace. Ghosteen is a loving, and lovely, addition to that project.