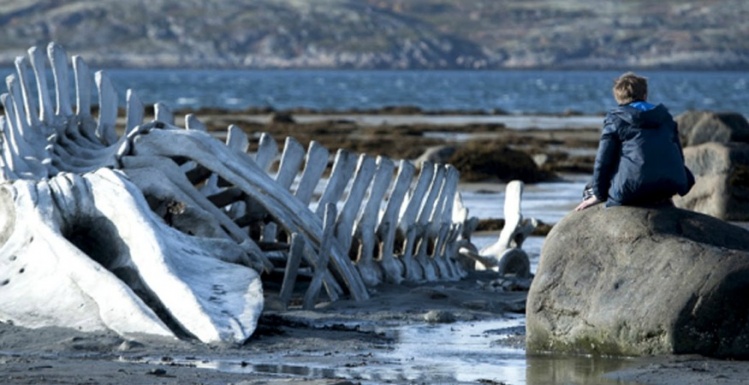 Feeling emotionally robust, moviegoer? You’d better be if you intend to see Leviathan, the acclaimed Golden Globe winner and Oscar nominee for best foreign film, written and directed by Andrey Zvyagintsev. Tightly constructed, incisively directed, handsomely photographed, and perfectly acted, this Russian drama certainly disturbs in all the ways that Zvyagintsev and his co-writer Oleg Negin wanted it to, but also achieves a degree of desolation that possibly goes beyond their original intent.

A premonition of doom arrives with the very first shots of the icy, rocky seacoast of the northern Russian fishing community of Pribrezhny. The sky displays arctic magnificence but the water looks dank and oily. Surely nothing good can happen here.

And nothing does. The hero, or antihero, is a ne’er-do-well handyman named Kolya (played by Aleksey Serebryakov, who deftly tempers ferocity and self-pity with a befuddled sweetness). Kolya, who lives with his second wife Lilya and a son from his first marriage, Roma, is resisting efforts by the local government to take over his seaside property for a profitable development project. These efforts are spearheaded by the town’s corrupt mayor, Vadim (played by Roman Madianov, who looks a bit like Boris Yeltsin and manages to be both menacing and pathetic). Kolya officially charges the mayor with not giving sufficient notice and appropriate recompense, but he is mainly upset about being pushed around by officialdom and dislodged from his home. He calls in help from Dmitri, an old army buddy now practicing law in Moscow. An initial court ruling, read by the judge with a machine-like precision and speed that conjures up a nightmare of judicial indifference, goes against Kolya, but Dmitri counsels patience. He says he has contacts back in Moscow who have some useful dirt on Vadim. When Dmitri finally presents this dirt behind closed doors, the mayor appears to be cornered. So Kolya can win after all?

Curb all optimism. We soon see the craggily handsome Dmitri lying on his hotel bed, and then Kolya’s wife walking in from the bathroom nearly naked. The adulterers mean no harm to Kolya’s legal battle, but their affair makes many things go awry for him. Friendships are fractured, beatings administered; there is a suicide and, toward the end, the same judge is reading, in the same machine-like voice, a judgment immeasurably more devastating to Kolya than the previous one. By the end, every hope for justice has been annihilated. The fix was always in, as we should have known from the start, but at least the talents of the director and his actors never let the bleak plot seem mechanical.

The evils depicted here aren’t altogether systemic: they arise partly from individual moral failings. And if it’s individuals who are at fault, then, at least theoretically, there’s hope that they can learn, improve, and grow strong enough to fight the system. But what gives me pause is that all Leviathan’s characters seem to be sunk in either self-justifying choler or a sort of hopeless, lachrymose emotional swamp from which no one can escape, or even dream of escaping. It’s depressing enough to think you can’t beat the system, but much worse to believe you can’t beat whatever’s gone wrong in your head or heart. Behold Kolya and Dmitri pressing their foreheads together in drunken self-pity while they reminisce about happier days as Lilya looks on in disgust. Or consider the face-off between Kolya and Mayor Vadim outside the former’s house, with both antagonists so drunk they can’t keep upright, much less brawl. Laugh if you can at one of the lighter, yet still quite bitter moments in the film when Lilya enters the home of her friend Angela, and Angela’s little son shoots his toy gun at her. Lilya: “Why do you want to kill me?” Boy: “Because you’re pretty.” Angela: “That’s men for you. First you’re pretty. Then they want to kill you.” Saddest of all, the scene at dawn late in the film when Lilya (exquisitely played by Elena Liadova) disentangles herself from her sleeping husband’s embrace and realizes that, for a multitude of reasons, she can’t accept his forgiveness of her adultery. These scenes (and several others) gave me the impression that none of these people had any more chance of escaping their miseries than a puppy would have of swimming its way out of a giant vat of molasses. All these characters and their woes seem to have their Russian literary antecedents: old man Karamazov with his dangerous, spiteful buffoonery; the realization of Anna Karenina that her husband is, emotionally and morally, a flunky; the feuding drunken landowners of Gogol. Everything ends in a key of self-abasement that is oddly self-congratulatory: no one can suffer like us Russians!

To be fair, there are moments in Leviathan that clearly indicate that the filmmakers intended it to be a political indictment of a corrupt tyranny that could and should be curbed. In Mayor Vadim’s office hangs a picture of Putin, and the town’s fishermen and cannery workers don’t need to be told that a fish rots from the head down. Furthermore, the film is just as blunt in its indictment of the Orthodox Church for cozying up to the mayor. On a bureau of the local bishop’s office is a bust of Jesus, but on either side of it are images of czars. Church and state are being indicted together because they are together in corruption. (To his credit, the Metropolitan of Murmansk and Monchegorsk, the diocese where Leviathan was shot, has reportedly praised the film’s honesty.) And yet 30 percent of the movie’s budget came from the Russian Ministry of Culture. And while some profanity was removed from the version that showed in Russia, apparently it was not otherwise censored. Amazing!

Or perhaps not so amazing. Late in the movie, Kolya bitterly asks a priest, “Where is your God?” and the cleric proceeds to cite Job as someone who vainly argued with God and could regain contentment and prosperity only by ceasing to question the Lord. The priest plainly intends this as reprimand and instruction, but whom has Kolya questioned or argued with throughout the movie? Not God, but the local representatives of the state. So what is the Leviathan of the title? Is it Thomas Hobbes’s Leviathan, the state? Or is it the whale in the book of Job, whose might Jehovah invokes in order to measure by comparison his own much greater might?

If you lay a hand on him, you will remember the struggle and never do it again! Any hope of subduing him is false; the mere sight of him is overpowering. No one is fierce enough to rouse him. Who then is able to stand against me? Who has a claim against me that I must pay? Everything under heaven belongs to me. (Job 41:8–11)

In the context of the movie, are God and the state one and the same—a force not to be questioned as it goes about its proper business of subduing and disciplining a population too wild, too drunken, too self-pitying, to discipline itself? Zvyagintsev couches this possible equivalence as an irony, but Vladimir Putin, no dab hand at irony, might get a kick out of this movie. In a way, it justifies his grim regime and its sinister methods. In what may be the most paradigmatic political scene in Russian literature, the poor little clerk Evgeny in Pushkin’s “The Bronze Horseman,” shakes his fist at the statue of Peter the Great, whose royal fiats have indirectly ruined the clerk’s life. Then the statue seems to come to life, threatening to crush the little man under the horse’s hoofs, and the ineffectual Evgeny slinks away to die. Why bother with any protest, even the shaking of one’s fist? This is Mother Russia. The fix is always in.

Erratum: In a fit of absentmindedness I wrote the following phrase in my review of Mr. Turner (March 20): “[Turner] sincerely expresses an abiding love for his father...then later...denies he has any living parent.” What I should have written was “...any living child.” Good son, bad father: that’s one of the many contradictions director Mike Leigh imputes to the protagonist of his splendid movie.

The Chronicles of Narnia: The Lion, the Witch, and the Wardrobe