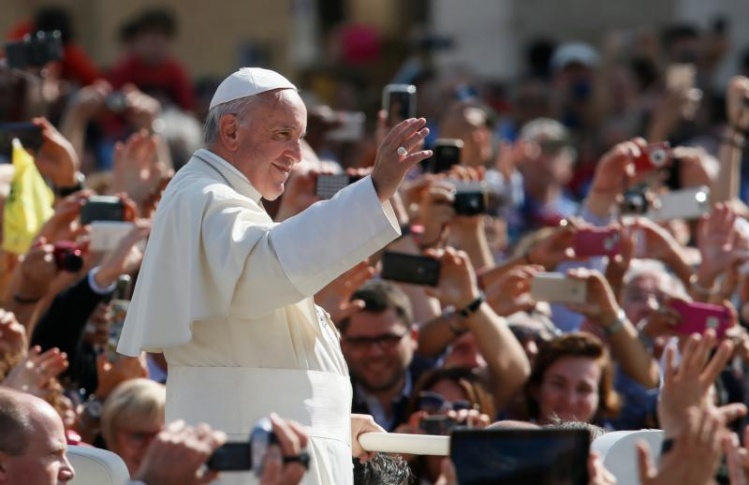 About a hundred of us gathered at the Jesuits’ international headquarters in Rome last Tuesday to attend the first press conference of the order’s new superior general, Fr. Arturo Sosa.

Much had already been written about him since his election the previous Friday.

For example, the Venezuela native, who turns sixty-eight on November 12, is the first non-European in history to head the church’s largest order of priests and brothers.

He’s also a political scientist more than a theologian or spiritual guru and has had vast experience in governance.

He was the provincial superior of Jesuits in Venezuela from 1996-2004 and, for the past two years, he assisted the order’s most recent general, Fr. Adolfo Nicolas, in overseeing the several inter-provincial houses in Rome where Jesuits from around the world reside while working and studying in the Eternal City.

Fr. Sosa has been a voting member at the past four general congregations, beginning with the 1983 gathering when Fr. Peter Hans Kolvenbach was elected to head the order, the 2008 assembly that chose Fr. Nicolas, and now the still on-going general congregation that chose him as the most recent successor of the sixteenth-century Jesuit founder, St Ignatius of Loyola.

Several leading Jesuits have noted that all this experience has equipped the Venezuelan with extensive knowledge of the Society of Jesus around the globe.

As La Croix’s Rome correspondent, Nicolas Senéze, noted, the new Father General offered an “initial outline” of what he hopes to accomplish during his term (which is for life) during a Mass last Saturday in the famed Jesuit Church of the Gesù in downtown Rome.

He said he wanted to look for “alternatives to overcome poverty, inequality, and oppression” but also “to not stop raising questions relevant to theology and to deepening the understanding of the faith.”

Fr. Sosa offered more details on that at Tuesday’s press conference. But he also noted that the general congregation would, over the coming days, identify and fine-tune the priorities and plan of action the Society of Jesus should be following over the next phase of its history.

The following are just a few of my impressions from our first real encounter with the new Father General:

Above all, he came across as confident, yet humble. He seemed authoritative, but never through anything he said did he give the impression of being authoritarian. To the contrary, he acknowledged he “really needs help” from all his Jesuit brothers.

Most people have been struck by his full head of medium-length white hair and neatly trimmed moustache. That, and his overall manner, gives him an appearance of healthy masculinity, though—thankfully—he displayed no hints of being gripped by machismo.

In a way he struck me as a slightly younger version of Pope Francis. Both men are the first Latin American Jesuits to be elected, one to the papacy, and the other as head of the Society of Jesus.

While the worldwide church is growing fastest in Africa and the Jesuits are drawing more of their vocations from Asia (especially from India), the election of Francis in 2013 and now of Fr. Sosa says this is decidedly a Latin American moment for Catholicism. It is, perhaps, in that part of the world where the social doctrine of the church, especially how the Second Vatican Council enunciated it, has been studied and promoted most systematically.

Like the pope, the new general is deeply formed by the culture of Latin America. He is, also like Francis, committed to breaking down barriers of division (at all levels) and reconciling humanity with God and creation. Promoting faith and justice, he said, must continue to be the leitmotif of their Jesuit order.

The general congregation knows this and one would expect that the priorities it maps out for the Society of Jesus will seek to intensify these efforts.

The press conference also served as a reminder that the universal Church is no longer Euro-centric and the Italians in Rome are no longer its masters. That was clear when a chorus of the Rome-based journalists on hand burst out in protest when Fr. Sosa kept speaking in Spanish. (To be fair, most of the questions were put to him Spanish.)

“In Italiano!” the journalists shouted. Even some English- and French-speaking reporters supported that motion.

Graciously, the new general gave a summary of his remarks in Italian, with a Latin American accent that underscored a further similarity he shares (at least superficially) with the current pope. But he didn’t have to speak Italian, which he does quite well, by the way. More than half the Catholics around the world have Spanish as their first language.

A Vatican Radio reporter asked Fr. Sosa to respond to a question by speaking in English. The new general, who displayed a good sense of humor throughout the hour-long encounter with us, said:

If you’ve been following the politically conservative press (and, even more, if you surf the Internet) you might easily have come to the conclusion that a civil war has broken out in the global Catholic Church.

Here’s the scenario that has been put forth: loyal Catholics, committed to upholding the unchanging traditions and immutable moral teachings of the their beloved church, are pitted against progressives who, while professing to be Catholics, have watered down church doctrine and practice by capitulating to the demands and false values of secularism.

A civil war usually means a country (in this case, the church) is divided into two, more or less equal factions. If you really believe this is the case in Catholicism today you would be wrong.

The people who are painting this dark picture are not only and predominantly traditionalist-minded Catholics, they also tend to be, in many cases, staunch laissez-faire capitalists and social conservatives. They occupy a large space in social media that is oversized compared to—I would contend—their miniscule numbers.

Some of these are members and supporters of an intransigent cluster of new religious orders attached to (or, at least, supportive of) the Tridentine Mass. As you can imagine, they have a less-than-rosy view of the Second Vatican Council and the reforms that followed from it. (Most Catholics, by the way, take Vatican II as part of what it means to be…Catholic.)

It should be made clear that the vast majority of these new clericalist communities are inward-looking and involved in minimal, if any, pastoral outreach. They tend to find their comfort zone in the sanctuary and one gets the impression that they just love to “play church.” Additionally, they have no visible ministry to the poor and marginalized, those whom Pope Francis says are on the “peripheries” of existence.

But that’s another of their problems: the pope himself. These Catholic neo-Tridentinists, culture war traditionalists, and their sympathizers are not exactly fans of the current Bishop of Rome. Their reaction to him ranges from open hostility and disdain to passive-aggressive non-compliance with the reform and renewal of the Church he’s trying to bring about.

It is difficult to say with any real precision how many bishops (and cardinals) back the views and efforts of this (again, I would contend) tiny segment of the Catholic faithful. But one’s sense is that, proportionate to the general Catholic population, these hierarchs actually constitute a higher percentage of those who are uncomfortable with the Jesuit pope.

A leading paper in Italy (La Stampa), which also owns the Vatican Insider website, recently ran a lengthy “survey” of groups it describes as “Catholics who are anti-Francis but love Putin.” That would be Vladimir Putin, the despotic president of Russia.

The authors of this long article are two serious and normally well-informed journalists, Giacomo Galeazzi and Andrea Tornielli.

But, curiously, much of their overall analysis of their survey rests on the testimony of a man named Massimo Introvigne. He’s a Rome-born sociologist and intellectual property lawyer who’s known to be close to Italy’s former premier Silvio Berlusconi.

Introvigne specializes in tracking new religious movements, but he’s also emerged in the past several years as one of the leading watchdogs of “persecution” of Christians in Europe. He’s done this as a leader of continental-wide and Italian organizations that monitor religious hate crimes.

Introvigne agrees that the size of the “dissidents” opposing Pope Francis is “overestimated”. But he also notes—and I disagree—that of the “more than five thousand Catholic bishops in the world, only about ten of them are active in their opposition, many of whom are retired.”

In any case, he stresses that the opposition to the pope is not substantial because the disparate groups Galeazzi and Tornielli identify in this camp are “not united.”

But my eyes popped in disbelief when I read the concluding lines of the La Stampa-Vatican Insider expose.

Introvigne pointed out a surprising trait that many of these circles share: “It is the mythical idealization of Russian President Vladimir Putin, who is presented as a “good” leader in contrast to the “bad” leader, the Pope, because of his stance on homosexual people, Muslims and immigrants. Russian foundations that have strong ties with Putin co-operate with the anti-Francis opposition.

I seriously doubt that.

But, then again, I can’t see any truth in the claim that there is a civil war underway in global Catholicism. That is merely a claim being made by a small, but very vocal number of people (and bishops). Yes, they are adverse to Francis and are angry that he’s stopped them from being that tail that wags the dog.

There has been no suggestion that it had anything to do with the much-touted opposition to Pope Francis, but on Wednesday a very strange and rather disappointing thing happened near the Vatican.

The city of Rome’s so-called “decorum cops” swiftly removed a mural that had been pasted on a wall overnight depicting the pope as a mischievous graffiti artist.

A “street artist” who signs his work “Maupal” put a playful image of Francis on a stepladder painting a tic-tac-toe above a shop window. The artist had the pope drawing peace signs in place of the round circles, while an image of a Swiss Guard keeps look-out around the corner.

One of my friends who works in the Vatican saw the mural on his way to the office and sent me a photo of the thing early Wednesday morning. Before long, crowds of onlookers were gathering in admiration while others were sharing the playful image on Twitter.

It was cute and harmless. And it seemed to give most people a good chuckle.

But only a few hours later, when the city’s anti-graffiti squad swooped in to destroy the good-humored piece of street art, people began tweeting their disbelief and anger.

Especially those of us who live in Rome.

They (we) thought it was outrageous that the “decorum cops” should be wasting their time on “cleaning up” something so good-humored and well-done when too many buildings of the city continue to be blighted by the ugliest and most meaningless graffiti and garbage, which is collected only sporadically, piling up around overstuffed trash bins.

However, I suspect there are some folks in the Vatican who were glad to see the mural of the prankster pope disappear. But they are among those who would also like to see his entire pontificate pass into oblivion.