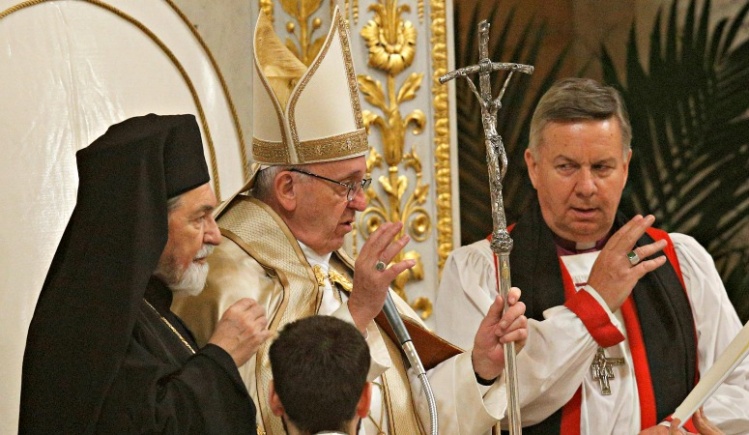 Pope Francis has decided to go Sweden next autumn to pray with Protestant faith leaders at an ecumenical liturgy that will begin a year of events commemorating the 500th anniversary of the Reformation.

The one-day gathering will take place on October 31 in the southern city of Lund where the Lutheran World Federation (LWF) was founded in 1947.

The liturgy will be based on a Catholic-Lutheran “Common Prayer” that the Pontifical Council for Promoting Christian Unity and LWF drafted together.

The Vatican made the announcement this past Monday, the final day of the Octave or Week of Prayer for Christian Unity.

Just hours later Francis led an ecumenical prayer service at the Papal Basilica of St. Paul’s Outside the Walls, during which he offered a moving apology during his homily.

“As Bishop of Rome and pastor of the Catholic Church, I want to ask for mercy and forgiveness for the behavior of Catholics towards Christians of other Churches which has not reflected Gospel values,” he said

“At the same time, I invite all Catholic brothers and sisters to forgive if they, today or in the past, have been offended by other Christians," he added.

Francis said it was impossible to “cancel out” faults of the past but he said these should not “continue to contaminate” relations between the various Christian communities. “God’s mercy will renew our relationships,” he insisted.

During the liturgy at St. Paul’s the pope did two other significant things that were specifically aimed at giving a boost to the ecumenical movement.

First, he had the personal representatives of the Ecumenical Patriarch of Constantinople and the Archbishop of Canterbury accompany him—shoulder-to-shoulder and as equals—through the basilica’s holy door, the only portal of the four papal basilicas he had not yet traversed.

Second, and more significantly, he asked these two non-Catholic delegates—Orthodox Metropolitan Gennadios and Anglican Archbishop Sir David Moxon—to join him at the end of the liturgy in giving a joint blessing.

Both men were caught off guard when Francis motioned for them to come up to the imposing marble throne, used exclusively by the Roman pontiffs and their legates.

Papal servers actually had to fetch the Orthodox bishop after the man next to him—a momentarily confused Cardinal Kurt Koch, the Vatican’s ecumenical chief—started towards the pope!

The two non-Catholic bishops eventually ascended the steps and took their places on either side of the ornate papal throne. But once more Francis surprised them by insisting that they “come up higher” and stand next to him—again shoulder-to-shoulder—on the very base of the throne. They then offered the final blessing together.

No doubt, these are only gestures. But they are important ones. They further highlight the Jesuit pope’s desire to redefine what is essential to the exercise of papal primacy. This, in a sense, is jumpstarting a dormant invitation that John Paul II issued to all Christian bishops and theologians in his 1995 encyclical, Ut Unum Sint.

Unfortunately, some Catholics (especially traditionalists) are not happy about any of these ecumenical developments. They, too, need God’s mercy and (if they offend us) our forgiveness.

This is yet another challenge the pope has issued for the Holy Year.

Most people who have never spent more than an occasional vacation in Italy—especially my American friends—are generally surprised when I tell them this land of fashion addicts, PDA (public display of affection) exhibitionists and live-and-let-live libertines is actually quite conservative.

Naturally, there’s a whole list of other such stereotypes as those mentioned above (some of which are actually true) that make it difficult for non-Italians to see the innately conservative complexion of the Bel Paese and its people.

Much of the conservatism here surrounds the family. Nothing is more sacred to Italians than the family. How could it not be when nearly 66% of young adults between ages 18-34 still live with their parents? And this is not just because of depressing economic factors.

When they do finally leave the nest, Italians tend not to migrate too far. They try to stay in the same apartment building or neighborhood where mom and dad live. But even if they can’t manage that, they rarely leave their hometown.

This is a country where, at least until relatively recently, things have tended to stay pretty much the same as they have been for centuries. Many Italians seem unable to recognize this. But those who can often blame the church for keeping Italy one of the most socially conservative countries in Europe.

Sure, the “powerful” Catholic bishops were not powerful (or political) enough to convince voters to repeal legalized divorce and abortion in separate referendums in 1974 and 1978, but they did manage to kill attempts at making stem-cell research and artificial fertilization legal in 2005.

And up to now, the bishops and their allies in parliament have made sure that this remains the only state in Western Europe (save the Vatican and the miniscule principality of Monaco) that does not legally recognize same-sex civil unions or marriages. They did that forcefully with the help of friends in parliament in 2007, as Massimo Faggioli has recalled.

But that could soon change.

Prime Minister Matteo Renzi, who just turned 41 last week (and does not live with his parents!), is determined to pass into law the most recent bill on civil unions. It has been languishing in parliament for nearly three years.

Groups opposing the bill, including several Catholic movements, have deliberately tried to frighten Italians by saying it would legalize gay marriage. In fact, it would only sanction civil unions—even of heterosexual couples, precisely because they do not want to get married.

It is now official. Australia’s ambassador to the Holy See, John McCarthy, has finished his term of duty in Rome and will soon be returning home to Sydney.

The 68-year-old lawyer and former chief counsel to the Australian Labor Party had his farewell audience (visita di congedo) with Pope Francis on January 15.

But it seems he was not too happy about it. Apparently, the ambassador sunk into denial before Christmas when he was told that his mission was complete and it was time to go back to Australia.

In fact, Ambassador McCarthy had already been extended several months beyond the three-year term that is normal for such Australian envoys. He was appointed to the post in April 2012, arriving in the Eternal City a few months later.

Some reports say he enlisted the help of certain Vatican officials to petition Australian governmental and foreign ministry authorities to further extend his mission in Rome.

It is reported that Archbishop Marcelo Sanchez Sorondo, an Argentine priest who joined the Diocese of Rome many years ago and is now chancellor of two separate pontifical academies dealing with science and social science, even wrote a letter to Australian officials requesting them to keep Ambassador McCarthy in post.

That must not have gone over well in the second section of the Secretariat of State, which is the Holy See’s equivalence to a foreign ministry. The man who heads this important section, Archbishop Paul Richard Gallagher, could not have been amused. And the irony is that up until November 2014 he was papal nuncio to Australia.

Mr. McCarthy is only the second Australian ambassador to reside in Rome. His predecessor, Timothy Fischer, was the first. People are wondering if he will have been the last. At least for a while.