Women in Leadership, or Not?
By Robert Mickens
Letter from Rome
Pope Francis
Columnists
Social Justice
Vatican II
Women in the Church 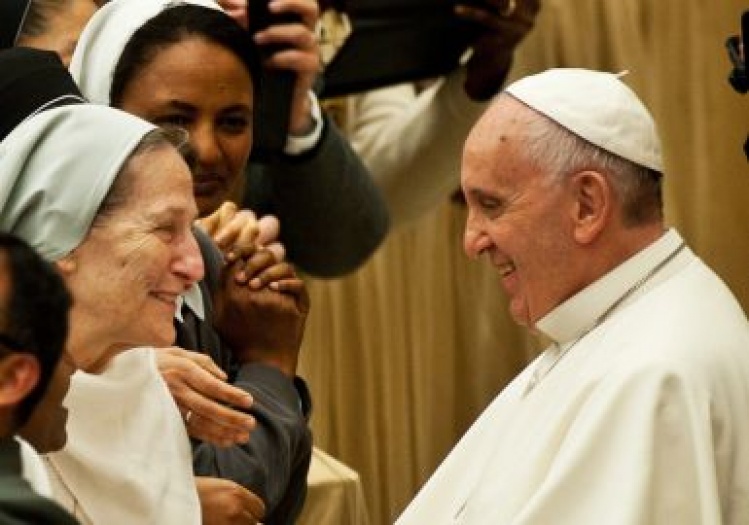 The church has lost another great and beloved figure and one of the few remaining theologians present at the Second Vatican Council. Cardinal Roberto Tucci, the Italian Jesuit who would become world-famous for organizing all but a handful of Pope John Paul II’s one-hundred-and-four international journeys, died Tuesday in a Rome clinic following several years of declining health. He would have turned ninety-four next Sunday. He is the fourth cardinal to die this year and the second in only the past week, following the April 8 death of Cardinal Jean-Claude Turcotte, archbishop-emeritus of Montréal. “Padre Tucci,” as he preferred to be called even after becoming cardinal, was editor of the stodgy Jesuit journal, Civiltà Cattolica, when Pope John XXIII chose him to be a peritus (theological expert) at Vatican II. He not only helped in the preparatory phase of the council, but he then worked on drafting several of the final documents it issued. He is recognized, especially, as playing a major role in writing Gaudium et Spes, the Pastoral Constitution on the Church in the Modern World. Fr. Tucci was born in Naples of an Italian father and an English Anglican mother. He studied theology at the University of Louvain in Belgium and at the Gregorian University in Rome before joining Civiltà Cattolica as a writer and then editor. He was an official advisor to the Jesuit General, Fr. Pedro Arrupe, from 1970-75, a period during which he moved from heading the order’s journal to overseeing its radio station – Vatican Radio. Soon after taking on the enormous task of organizing John Paul’s travels in late 1982, he assumed the more ceremonial post of Vatican Radio’s president. I had not fully realized the respect and affection he commanded until my first papal visit; it was to Santo Domingo in 1992. As the Vatican’s novice, I stuck as close to Padre Tucci as possible. Before the start of a huge outdoor Mass to mark the fifth centenary of the evangelization of Americas, hundreds of bishops and cardinals – many of them quite elderly and slow – filed past us to form the opening procession. One by one they stopped to greet Tucci, who always wore a simple black suit and clerical shirt with removable tab collar (and often had a cigarette in his hand). “Who was that one?” I’d ask eagerly, every so often. “I can’t remember his name, but he was at the council,” he said more than once, with his distinctive chuckle. John Paul II made him a cardinal in 2001 after he retired as the papal trip planner. In the same ceremony the Polish pope also gave the red hat to another Jesuit – the then-archbishop of Buenos Aires.

Are we finally going to see women appointed to some significant jobs that give them a real voice at the Vatican? One cannot but wonder after hearing statements this week from Pope Francis and Cardinal Peter Turkson, head of the Pontifical Council for Justice & Peace. “Our dicastry is without a secretary [No. 2 official],” the Ghanaian cardinal said suggestively on Tuesday. Speaking at a conference on the leadership role women play in conflict resolution, he said things move slowly in the Vatican. But he also claimed the pope knows that more must be done to include women in positions that matter. The next day, as if on cue, Francis said it himself: “In fact, it’s necessary that women are not only listened to more, but that their voices have real weight and recognized authority in society and in the church,” he said, as a large crowd applauded him at his Wednesday general audience in a packed St. Peter’s Square. “Without a doubt we must do much more in favor of women, if we want to reinforce reciprocity between men and women,” he said. And that was, in fact, at the heart of his talk – recognizing and not blurring the differences between the two sexes. He said the greatest threat to this was so-called “gender theory,” which he labeled as “an expression of frustration and surrender, aimed at cancelling sexual differences because we no longer know how to deal with them”. The seventy-eight-year-old pope said gender theory was a “step backwards.” The issue was not discussed at the conflict resolution conference. Not by Cardinal Turkson, nor by the three women that offered their reflections. The gathering, sponsored by the U.S. Embassy to the Holy See, was held at the Dominican-run University of St. Thomas (the “Angelicum”). Several ambassadors, some diplomats, professors, and lots of women religious attended the event. In his opening remarks, U.S. Ambassador Ken Hackett said, “We must include women as full and equal partners.” All the participants said the same thing in various ways. Yet their speeches Tuesday and the Pope’s catechesis on Wednesday are only words. Call me a doubting Thomas, but until they are transformed into deeds, I will remain a skeptic.

It sure looks like the Vatican is distancing itself from a fledgling interfaith partnership it helped launch last year to fight human trafficking. Representatives of Pope Francis, the Archbishop of Canterbury, and the Grand Imam of Al Azhar (Egypt) were among those who signed a document at the Vatican in March 2014 to establish the Global Freedom Network (GFN). Andrew Forest, an Australian philanthropist who already heads the anti-slavery organization Walk Free, added his signature. Nine months later, representatives of other major faiths joined the GFN co-founders in Rome to sign a soaring joint declaration against modern slavery and enter the coalition. But now it seems that the pope’s representative, Bishop Marcelo Sanchez Sorrondo, has pulled out of the project. The seventy-two-year-old Buenos Aires native has been chancellor of the Pontifical Academies of Science and Social Sciences since 1998. He was originally part of the GFN’s three-member executive board of directors. But you won’t find his face on the GFN website anymore. Apparently, he has taken his bat and gone home after squabbles emerged over who would lead the group. Instead, Bishop Sanchez is putting all his efforts into anti-slavery initiatives that Pope Francis explicitly urged his two Vatican think-tanks to undertake shortly after his election in 2013. “Marcelo, I think it would be good to examine human trafficking and modern slavery. Organ trafficking could be examined in connection with human trafficking. Many thanks, Francis.” You can see a copy of the original hand-written note at End Slavery, the new website that Bishop Sanchez launched only several days ago to promote the academies’ work. A copy of the original joint declaration against modern slavery, which religious leaders signed in December 2013, is also posted there. One sees faintly the GFN logo on its letterhead. But that’s the only place where you’ll find even a trace or recognition of GFN on the Vatican’s “End Slavery” site.