Francis in Sri Lanka, English at the Vatican
By Robert Mickens
Letter from Rome
Pope Francis 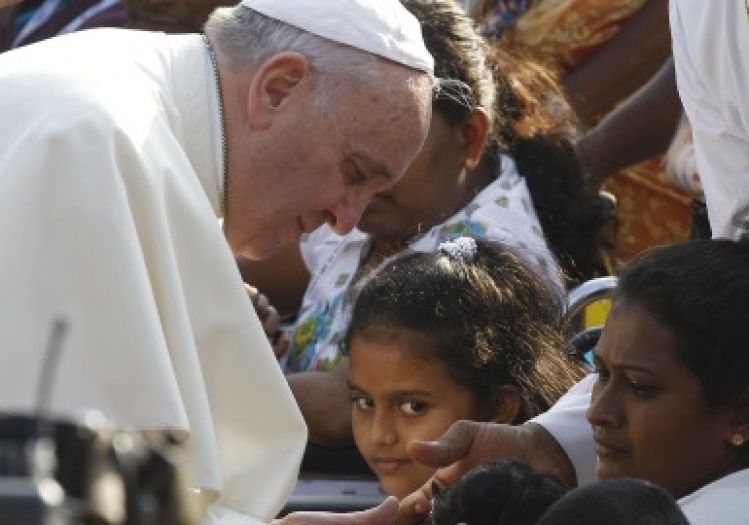 Pope Francis is currently in the middle of a weeklong visit to Sri Lanka and the Philippines. And the trip has been wildly successful in terms of local (and even global) media coverage and by the large crowds that have come out to see him. This is already the second pastoral journey Francis has made to the further reaches of the vast Asian continent – he was in South Korea last August – even though he hasn’t even been Bishop of Rome for a full two years. He is the first pope to this part of the world since 1999, when John Paul II went for a second time to India. The sainted Polish pope made a staggering one hundred and four trips around the world during his marathon pontificate, but only seven of those were to Southern and Eastern Asia. Catholics in those countries are not unaware of this detail, nor of the fifteen-year gap between John Paul’s last visit to their region in 1999 and Francis’ first last this past summer. Though a minority in every place except the Philippines, Asian Catholics have long felt neglected by church officials in Rome. When Japanese Cardinal Stephen Fumio Hamao retired as head of the Pontifical Council for Migrants & Itinerants in 2006, he publicly criticized the Vatican for paying too little attention to Asia and Africa and seeing them as “immature in terms of Christianity.” He bristled, “They only consider Europe as mature, and maybe Latin America is considered an adult church now.” The cardinal, who died just a year later, would be pleased that history’s first Latin American pope has begun giving greater attention to the church in Asia. But it is puzzling why Pope Francis, who had wanted to be a Jesuit missionary in Japan when he was younger, did not make the country part of his two journeys to Asia. Even more curious is why he has not created a Japanese cardinal. The country has been without an elector since 2008.

Everyone but only a few ancient Italians still rattling around the corridors of the Roman Curia will readily admit that the Vatican has a communications problem. Much of it is related to inadequate coordination among the various departments involved with the media and public information. But there is also a serious challenge posed by the need for a common language. English, of course, has become, de facto, the international language. But the Vatican – the most international organization in the world! – has always resisted pressures to adopt it as its lingua franca, usually under the pretext that it would be akin to blessing the language of the colonizer or the remaining super power. The reality is that the Italians (at least in the Curia) are notorious for not speaking foreign languages. Count Pope Francis among them. With exceptions that could be counted on the fingers of one hand, the Italian-Argentine Pope has spoken in public, from the beginning of his pontificate, exclusively in Italian and (eventually) his native Spanish. But in October 2013 he delighted many people around the world when he recorded a video message in English for a conference in the Philippines. It was halting and heavily accented, making it essential to run English subtitles across the bottom of the frame. And it was his last attempt to speaking the language publicly—until now. During his visit to Sri Lanka Francis has given all his talks in English. His accent is still thick, but his delivery is not so labored now. Obviously, he has been practicing. And he’ll have to continue with the English tutorials because next autumn he’ll be going to the United States. The downside to Pope Francis’s use of English is that it limits him from making his now-famous spontaneous and off-the-cuff remarks. But the upside (at least for us native English speakers) is that a pope who was thought to be an ally of the anti-English speaking bloc in the Vatican may have just become its most formidable foe.

Those who lived in Rome during the 1970s and 1980s may recall a Vatican Radio program called Quattro Voci, or Four Voices. It was an hour-long series of fifteen-minute news broadcasts in Italian, French, Spanish, and English that was originally set for the Holy Year of 1975. Much consternation was caused when the Spanish service was unceremoniously eliminated from the lineup in the early 1990s. There was also a lot of groaning when the distinctive Quattro Voci label was exchanged for the cumbersome and highly unimaginative program name, “Vatican Radio, World News – Italian, French and English Editions.” Some very colorful people had manned (and womaned, too) the microphones at Four Voices, especially in its early days. And one of the most unforgettable was the English service’s Henry McConnachie, a Scotsman who came to the radio in the late 1960s with his deep and sonorous burr, no doubt mellowed by cigarettes and the wee dram now and then. I met Henry when I joined Vatican Radio in 1989 and it was not long before we became close friends. When he quit the radio abruptly in 1992 after being picked over as head of his section our friendship actually became stronger. He and his longtime housemate, Speer, became like my extended family in Rome. There were many meals together and ongoing arguments over my less than obsequious attitude towards high church conventionalities. Henry, having been born in 1937, retained formalities and discretions most of his generation abandoned in the post-modern age. He was a voracious reader and loved to correct my mistakes of word usage or pronunciation. But he was also extremely generous with his time and money, even to a fault. Henry died this past Monday after years of declining health that should have claimed him many years earlier. Among those who will celebrate his funeral next Tuesday is Cardinal Jean-Louis Tauran, whom he had known since the French cleric was a student here. Rome has lost one of its native English-speaking characters and we have lost a dear friend.