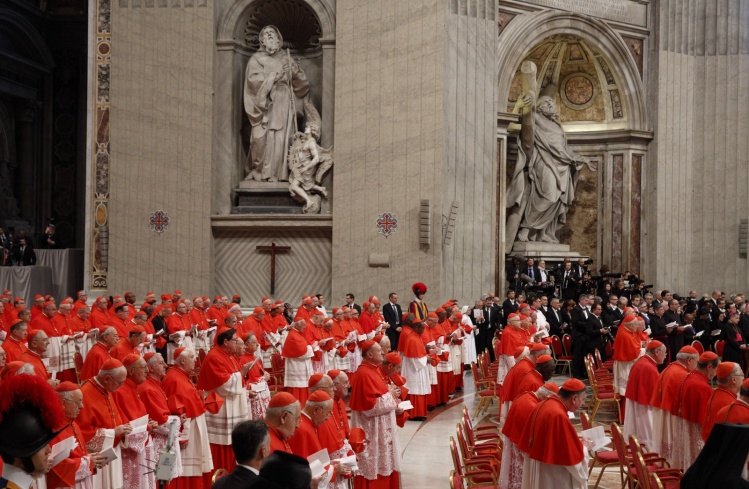 Pope Francis has spent his four years as Bishop of Rome steadily and tenaciously waging a campaign to change the mentality of individual Catholics and the ethos of the entire church, which he dreams of being an outward-looking, accident-prone and getting-its-hands-dirty community that is “on the move”.

In fact, the pope’s “attitude adjustment program” is gradually reshaping the very identity of global Catholicism, even though it’s not to everyone’s liking.

Just as he hinted he would do when he addressed fellow cardinals just four days before they elected him, Francis has been trying to liberate Jesus Christ from a church that, increasingly in the past three or so decades, had become a sick, self-referential, and theologically narcissistic institution living only for itself.

“In (the Book of) Revelation, Jesus says that he is standing at the threshold and calling,” the future pope said in a pre-Conclave meeting on March 9, 2013.

“Evidently the text refers to the fact that he stands outside the door and knocks to come in… But at times I think Jesus may be knocking from the inside—so that we can let him out. The self-referential church presumes to keep Jesus Christ within itself and not let him out,” he said.

In that short address, the then-Archbishop of Buenos Aires said:

“The church is called to come out from itself and go to the peripheries, not only those that are geographical, but also the existential ones: those of the mystery of sin, suffering, and injustice; those of ignorance and the absence of faith, thought, and every form of misery.”

Pope Francis has been bringing forth just such a church.

And there is ample evidence that this renewed way of being a Christian community has been embraced, by and large, at the grassroots. The vast majority of lay people, as well as folks who are not even Catholic, have been energized by this change of tone, emphasis, and way of mercifully walking with all humanity.

But it seems just as evident that the reception has been much more tepid among a significant number of bishops (mostly appointed by Francis’s two most recent predecessors), younger priests and many of the men aspiring to be ontologically changed by priestly ordination.

These types within the clerical caste are gritting their teeth and consoling themselves with the assurance that this pontificate will not last forever. They believe they just have to “wait out” the old Jesuit and then hope that the cardinals will come to their senses at the next Conclave and choose a more prudent and less disruptive man of unquestionable orthodoxy to be Supreme Pontiff of the Universal Church. Once that happens, they believe, their lives will finally get back to normal.

It is not a far-fetched thought.

So what can Pope Francis do to change attitudes at the top of the church? It is something he must ponder if wants to make sure the renewal and reform he has begun actually continue beyond his pontificate.

Back in November 2013, shortly after he announced his first consistory (some four months in advance) it already seemed clear that he would have to modify the number of electors if he wanted to significantly re-shape the College of Cardinals with men on board with his vision for the church.

“He likely will want to make a body that is now top-heavy with Europeans and North Americans more reflective of the ‘peripheries’ of the Universal Church,” I wrote in the November 9 issue of The Tablet.

“If Francis wishes to alter this geographical configuration, he may have to formally change the rules to increase the number of cardinal-electors beyond one-hundred-and-twenty,” the article continued.

Since the College of Cardinals is a human invention its existence and number of members are completely arbitrary. Pope Paul VI fixed the current limit on the number of electors, but there is nothing stopping Pope Francis from changing it. It is his prerogative and his alone. In fact, John Paul II derogated from Paul’s legislation several times and after consistories in 2001 and 2003, for example, there were as many as 135 electors.

It seems that the Argentine pope has been entertaining the idea of formally boosting the ceiling for some time.

And, in fact, just several days ago an article by a writer close to the retired Benedict XVI suggested the current pope is likely to name a large group of new cardinals next June by doing that very thing: issuing a motu proprio to formally increase the papal electors to 150.

“If he really increases the number of cardinal electors,” said the article, “Pope Francis would have 30ish ‘cardinal slots,’ and with these new red hats he would profoundly reshape the geography and orientation of the College of Cardinals.”

Now, the author of this piece of speculation is known to be a useful scribe for the information Benedict’s trusted aide Archbishop Georg Gänswein wants to put in the public domain. So perhaps the article should be taken with a grain of salt.

But Francis has been encouraged in the past to expand the number of electors, even by some of the most unsuspecting men in the hierarchy.

One of them was Cardinal Antonio Cañizares, the Spaniard who served as prefect of the Congregation for Divine Worship from 2008-2014 before Francis sent him back home to lead the Archdiocese of Valencia. Evidently, the man known as the “little Ratzinger” urged Francis back in late 2014 to raise the number of cardinal electors to 140 in order to create a greater geographical representation in the body that elects the Bishop of Rome.

But, as we know, the pope has so far maintained the 120-limit set by Paul VI.

A more forceful argument to increase the number of voters was made in this column exactly one year ago when it was speculated that the pope would create new cardinals in June 2016.

“If he adheres to the 120 ceiling, that gives him only eight slots to fill. If he waits until November—say, the Feast of Christ the King on the 20th of that month—he could add another five for a total of 13 new cardinals,” the column said.

In fact, the consistory was held in November, as the Letter from Rome had surmised.

“It is important to note that the thirteen new electors will not significantly tip the balance—either geographically or ecclesiologically/pastorally—in the College of Cardinals,” it was pointed out once the names of the new electors were announced.

“More significantly Pope Francis will have named only 44 of the electors, compared to the 55 created by Benedict XVI and the other 21 by John Paul II,” the article noted.

In a few weeks when Cardinal Lluís Martínez Sistach of Spain turns eighty there will be 116 papal electors, giving the pope only four slots to fill if he maintains the current limit. No other cardinals turn eighty until next year, when seven others age out by the end of 2018.

This earlier observation continues to hold:

“All things remaining equal, Francis will still have appointed only 55 electors over this period. If he wants to continue to make the College of Cardinals more reflective of the universal complexion of the Church and—more importantly—ensure that this illustrious body is fully on board with his vision for Catholicism’s future, he should seriously consider raising the ceiling to a larger number.”

At the risk of sounding like a broken record, one must repeat that it is vital for the pope to carefully consider which and how many men he puts into the red-hatted college. That’s because this body elects his successor. And it will be up to that man to decide whether and how to proceed with the renewal and reforms that Francis has painstakingly begun.

Also, cardinals cut a high profile and wield considerable influence on the rest of the church. They often set the tone and agenda for other members in the hierarchy, as well as the rest of the clergy and baptized faithful.

But unless he lives and remains Bishop of Rome for several more years perhaps the best thing Francis can do to make sure (though without any guarantees) that a man is elected to continue his vision for the church is to significantly expand the number of cardinal electors.

The figure has varied widely over the centuries, but in 1587 Pope Sixtus V set it at 70, apparently to reflect the number of elders Moses chose to help him govern the Israelites.

It’s not clear if Paul VI had any biblical imagery in mind when he fixed the number of electors at 120, but the Acts of the Apostles (1:14-26) recounts that after Jesus’ ascension into heaven there were some 120 disciples who chose the successor to Judas Iscariot as one of the twelve.

No matter which number Pope Francis chooses, it must be significantly greater than the current limit.

If he is looking for a clue from scripture he might consider the scene from the last chapter of the Gospel of John. The resurrected Jesus is standing on the shore of the Sea of Tiberius. The apostles are out on the water, fishing from a boat.

Jesus called out, ‘Haven’t you caught anything, friends?’

And when they answered, ‘No’, he said, ‘Throw the net out to starboard and you’ll find something.’

So they threw the net out and could not haul it in because of the quantity of fish.

The disciple whom Jesus loved said to Peter, ‘It is the Lord.’ At these words, ‘It is the Lord,’ Simon Peter tied his outer garment round him (for he had nothing on) and jumped into the water.

The other disciples came on in the boat, towing the net with the fish; they were only about a hundred yards from land.

As soon as they came ashore they saw that there was some bread there and a charcoal fire with fish cooking on it.

Jesus said, ‘Bring some of the fish you have just caught.’

And here’s the punch line:

Simon Peter went aboard and dragged the net ashore, full of big fish, one hundred and fifty-three of them; and in spite of there being so many the net was not broken.

In the church’s hierarchy, at least, the cardinals are the “big fish.”

May Pope Francis increase their number so they and the next man who wears the Shoes of the Fisherman might keep alive the evangelical momentum the current Successor of Peter has begun.