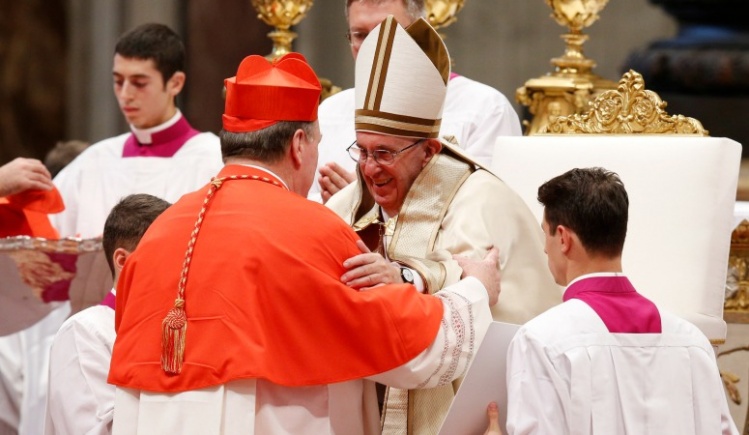 Pope Francis presided at his third cardinal-creating consistory on Saturday in St. Peter’s Basilica where he gave the red hat to thirteen new papal electors and four others over the age of eighty who are ineligible to vote in a conclave.

It is essential to note that the pope chose to hold the ceremony in conjunction with the conclusion of the Holy Year of Mercy, which he has tied the renewal brought by the Second Vatican Council.

“The Jubilee was also the Jubilee of the Council, hic et nunc, where the time of (the Council’s) reception and the time of forgiveness coincide,” Francis explained in a new interview that appeared on Friday in the Italian Catholic daily L’Avvenire.

“It’s a process that has matured over time, through the work of the Holy Spirit,” he added.

“The church exists only as an instrument to communicate to people the merciful design of God. At the Council the Church felt the responsibility to be in the world as the living sign of the love of the Father,” he pointed out.

The pope said this awareness has “shifted the axis” of the very idea of Christianity “from a certain legalism, which can be ideological, to the person of God who made himself mercy through the incarnation” of Jesus.

But Francis said not everyone in the church has grasped this.

“Some people—one thinks of certain reactions to Amoris laetitia [his document on marriage and the family]—continue to not understand, [for them] it’s either black or white, even if it’s in the flow of life that one has to discern,” he said.

They put before him, as the Pharisees and teachers of the law often did in an effort to trap Jesus, questions dealing with complex marital issues. They then demanded that he respond to them with simple (“either black or white”) yes-or-no answers.

Cardinal Burke in a subsequent interview said that if Francis did not answer to their satisfaction the four cardinals would make a “formal act of correction” and tell the world “that the pope is teaching error.”

Pope Francis has not commented directly on the cardinals’ letter—at least not publicly. But he stressed in this week’s interview that his efforts to make the church more merciful come directly from what was begun at Vatican II.

“The Council gave us this,” he said. But he noted that, because it takes about a century for a council to be fully received in the church, we are now only “halfway there.”

The pope also said the Catholic Church’s involvement in the ecumenical movement was a fruit of Vatican II, though he noted that some people have criticized him for trying to water down Catholic doctrine or protestantize the church.

How does he answer those charges? Here’s his full response:

"I don’t lose any sleep over it, I just continue on the path that has preceded me, I follow the Council. As for the opinions, you always have to distinguish the intent with which they are made. When there’s no bad intent, they help us to move forward. Other times it’s immediately clear that… they are made with bad intent in order to foment divisions. You can see immediately that certain types of rigorism come from a lack of something, from a desire to protect one’s own sad dissatisfactions."

For only the second time in ten years the consistory was not preceded by a general meeting between the pope and the entire College of Cardinals.

The only other exception was in November 2012 when Benedict XVI held his second consistory of that calendar year (the fifth and final of his pontificate) to add five more non-Europeans (as well as one curia official) to the body that would eventually elect his successor only four months later.

Francis held meetings with all the cardinals prior to his other consistories in 2014 and 2015. During that first gathering Cardinal Walter Kasper released his now-famous (or infamous) treatise on marriage and family life. The pope called it an example of “doing theology on one’s knees,” but others mocked it as the “Kasper proposal” to change Church teaching and praxis regarding divorced and remarried couples.

During last year’s pre-consistory meeting, Francis informed the cardinals of the progress he and his nine special advisors (from among their illustrious group) had made up to that point in mapping out a reform of the Roman Curia.

But this year there is no meeting.

That’s a shame because one of the purposes Benedict XVI had in mind when he made these meetings a regular feature of the run-up to the red hat ceremony was to give the cardinals greater opportunities to know each other better. Many of the cardinals who participated in the 2005 conclave that elected the now-retired ex-pope complained that they did not know each other very well at all. And that’s not a good thing, considering that the most important duty the cardinals have is to elect the Bishop of Rome, who is almost always someone from among their number.

But perhaps Pope Francis has other plans for facilitating a better process for electing the Roman pontiff. And he will surely have some words about his vision for making the Church a more visible instrument of mercy and how he expects all Catholics—and the cardinals in particular—to help him to do so.

But there might even be bigger news today (Monday) when Francis releases a new apostolic letter, Misericordia et Misera (Mercy and the Wretched).

The biographer and one of the chief media defenders of the embattled Australian cardinal in charge of Vatican finances has accused the pope of sowing deep division within the highest levels of the Catholic Church.

“Pope Francis Driving Unprecedented Wedge in Vatican.” That was the headline of a scathing article that appeared last week in The Australian.

Written by Tess Livingstone, author of George Pell: Defender of the Faith Down Under (Ignatius Press, 2005), the article casts the pope as a keen supporter of left-wing political agendas and raises doubts about his fidelity to certain church teachings.

Livingstone paints an unsavory picture of Francis. Her obvious intention is to leave her readers with the distinct impression that the Argentine pope is a crypto-Communist who is “unfailingly kind to outsiders”—such as abortionists, Muslims, “left-wing presidents” and people who espouse “anti-development causes”—but who “sometimes castigates sections of his own flock.”

She laments that he’s labeled as “too rigid” those “young people who exercise their right to attend the pre-Vatican II Latin Mass.”

And Livingstone even criticizes Pope Francis for his decision to give the red hat to Cardinal Blase Cupich of Chicago, but not to Archbishop Charles Chaput of Philadelphia.

“Chaput has a far stronger record of attracting vocations,” she says in another swipe at the pope who continues to say quality of vocations is much more important than quantity.

The article also insinuates that Francis has so alienated the church’s highest prelates that his decision not to hold the customary pre-consistory meeting this week with the entire College of Cardinals was out of fear that “such an encounter would be a showdown.”