Does Donald Trump Have a Strategy?
By The Editors
War and Peace
Donald Trump
Middle East
Editorial 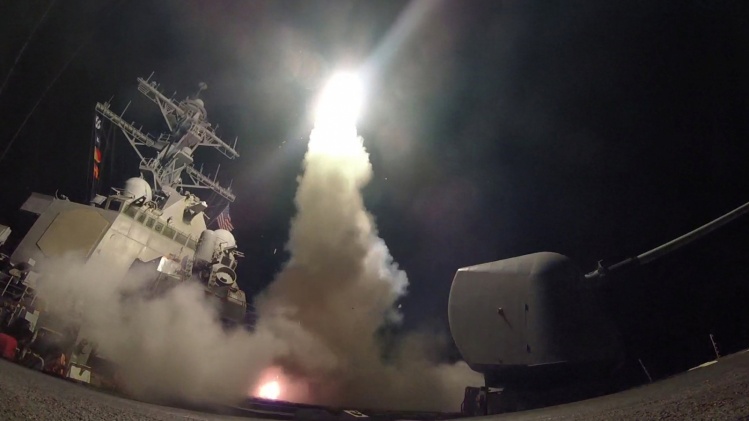 The USS Porter, in the Mediterranean Sea, fires a Tomahawk missile April 7

On the evening of April 6, as Donald Trump was digging into the “most beautiful chocolate cake that you’ve ever seen” with Chinese President Xi Jinping, the world learned that the president had bombed a Syrian military airfield in response to Bashar al-Assad’s use of a nerve agent against his own people. Soon after, MSNBC’s Brian Williams expressed awe at video footage of Tomahawk missiles being launched from U.S. Navy destroyers. “I am tempted to quote the great Leonard Cohen: ‘I am guided by the beauty of our weapons,’” Williams said. “They are beautiful pictures of fearsome armaments making what is for them...a brief flight over to this airfield.” Then, almost as an afterthought, he turned to his on-air guest and asked, “What did they hit?”

According to most reports, not much more than a few planes and some other equipment. The United States understandably warned Russian military advisers about our plans, and it seems unlikely they kept that information to themselves. Less than a day after the strikes, the Syrian air force was using the same airfield to attack anti-Assad forces. But Williams’s response was telling—he wasn’t alone in praising Trump’s actions before grappling with what their consequences might be. The Washington Post’s David Ignatius heralded the military action as restoring the “credibility of American power”; CNN’s Fareed Zakaria somberly intoned that thanks to the show of force Trump finally “became president of the United States”; and the New York Times’s Nicholas Kristof, after admitting the airstrikes were impulsive, hypocritical, and possibly illegal, confessed that “most of all, they were right.”

Good intentions are no substitute for a strategy in Syria, nor are they reason to give Trump the benefit of the doubt
sharetweet

That final assertion, more than any other, remains the best reason for the United States to escalate our involvement in Syria. Images of children writhing, gasping, and being hosed down in frantic efforts to wash off the poison is wrenching to watch, and Trump cited it as a key element in his decision to intervene. He acted, he said in a statement, to “prevent and deter the spread and use of deadly chemical weapons.” The photos of war-ravaged cities, descriptions of refugee camps, and testimony of those who have had loved ones tortured or killed all provoke disgust and rage. For nearly six years civil war has unfolded in Syria, and the scale of the human suffering there is staggering. An instinct to mitigate the catastrophe—one that threatens the stability of the Middle East and even Europe—is a noble one.

Good intentions, however, are no substitute for a real a strategy in Syria. Nor are they a reason to give Trump the benefit of the doubt. The civil war in Syria presents a fundamentally different challenge from the Balkan crisis of the 1990s, an oft-cited example of successful American intervention. In Syria it is not a matter of keeping the warring armies of different nations apart. Resolving the crisis there would require imposing order on a bewildering array of factions: Assad and his allies; Sunni Arab rebels; ISIS; the Syrian Democratic Forces, which are majority Kurdish; and a number of Salafi jihadist groups.

Becoming further entangled in Syria requires a political endgame, some sense of what will come after the fighting if the United States is to do more than add to the bloodshed. So far, there is no reason to believe Trump or his administration have any plausible plans for ending the conflict. Trump campaigned against getting stuck in a Syrian quagmire, and his sudden reversal seems driven by images he saw on cable television and a petulant desire to do the opposite of whatever his predecessor did. Nikki Haley, Trump’s ambassador to the United Nations, seemed to back regime change after the missile strikes; Secretary of State Rex Tillerson initially appeared to agree, saying that “it would seem there would be no role” for Assad in Syria’s political future, though he later changed course and argued that no one should “extrapolate” that there’s been “a change in our policy or our posture relative to our military activities in Syria today.” This isn’t strategic ambiguity, it’s chaotic incoherence.

Perhaps Trump’s decision to strike Syria will deter Assad from using chemical weapons in the future—even as he continues to kill so many by more conventional means. But it seems just as likely that he’s learned a very different lesson, that he can gas the Syrian people at the cost of some equipment, some planes, and the use of an airfield for a few hours.

Trump, meanwhile, has learned his own lesson: that the quickest way to gain a strange new respect in Washington is to start bombing other countries. Whether or not that strikes fear in Assad, it certainly should strike fear in the rest of us.