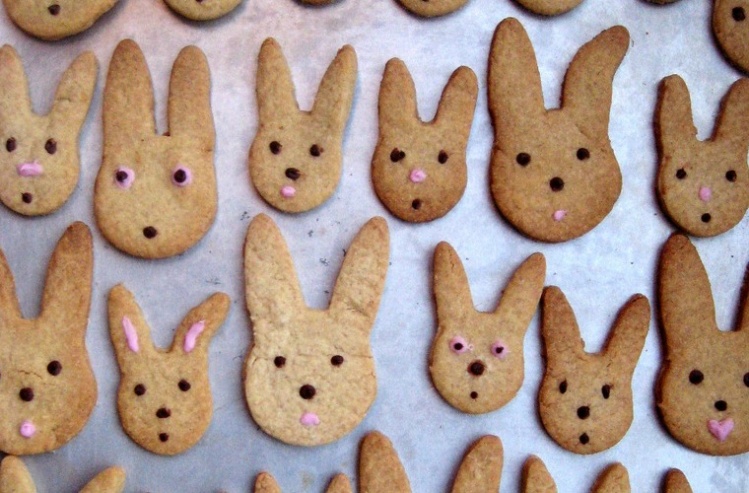 It was just after breakfast on Good Friday when I began eyeing the frosted bunny cookie on the kitchen counter. I could swear its googly eyes were peering back at me. “Come on, just a bite,” I could almost hear it say.

For all the talk of Catholic guilt, American Catholics get off relatively easy when it comes to fasting. Growing up, I always admired my Jewish friends who fasted on Yom Kippur and Muslim friends who fasted during the whole month of Ramadan. In view of the much more stringent practices of many Jews, Muslims, and Orthodox Christians, I was sure I could at least get through Good Friday with the prescribed fast for American Catholics—one full meal and two smaller meals, with no snacks—and my personal goal of giving up sweets for the day.

I had bought the frosted bunny cookie the day before, in anticipation of Easter. And already, my mind was justifying why I ought to eat it now. I was chasing after my rambunctious toddler. Wasn’t there an exception for manual labor? All right, I wasn’t exactly wearing a hard hat. But surely my exertion was worth one of the bunny’s ear. This is how temptation works. I took a bite. It was delightful. A priest once reminded me not to judge others, because something easy to you will be difficult for someone else, and vice versa.

What’s difficult for me is sugar. It calls to me like Bathsheba to David. As I went on with my day, I could have put the cookie up in the cabinet, gone for a walk, anything, but something prevented me. Besides, once the tip of the ear was gone, the next decision was easy. I had to even it out. Intellectually, I understood fasting. Jesus fasted for forty days in the desert, as Christians have throughout our history. Controlling our appetites brings us closer to God. Fasting should be accompanied by prayer, and prayer can be enhanced by fasting. I knew all this. I just didn’t do it.

I learned that day that Catholic guilt can be a rabbit with little eyes staring at you accusingly. You respond in the only way you can. You nibble an arm for dessert in the afternoon. And then the other one an hour later to make it even. And then you feel worse, because—look at the poor thing! By the end of the day, I had put the bunny out of its misery and declared my Lenten fast a failure. Later that night, my husband and I were awakened by a thud: our toddler had managed to climb out of her crib for the first time. We scrambled to transform her convertible crib to a toddler bed and lost hours finding the tools, doing the repairs so she wouldn’t fall again, and soothing her back to sleep.

Since then, I’ve learned about the difference between active purifications, like fasting, and passive purifications—what God chooses to work in us. If it were left to us, how many would have the strength to choose the hardships we endure? And yet it’s often these unchosen hardships that change and strengthen us the most.

As I finally lay down again after we had converted the crib, it occurred to me that although I’d failed at fasting, I could still offer up what was taken from me—sleep. And that got me thinking. It was a revelation to me that even through our failures to make offerings of our own free will, God is always giving us chances to demonstrate joy and acceptance, to be as patient with our lives as he is with us. Even when we fail to keep our resolutions, we can offer up whatever comes to us, and not just during Lent. Months ago, being awakened for hours in the middle of the night might have left me fuming or wondering how I’d get through the next day. Now, as a more experienced parent, I was able to face it as a matter of course. Maybe God was working something in me after all. The bunny was gone, but I was finally able to drift off with a remarkable sense of peace. A day of Lenten failure had ended with a small revelation.

Lauren Kosa is a writer of essays and fiction, who lives in Washington, D.C.