When Twins Go Their Own Ways
By Ellen B. Koneck
The Last Word 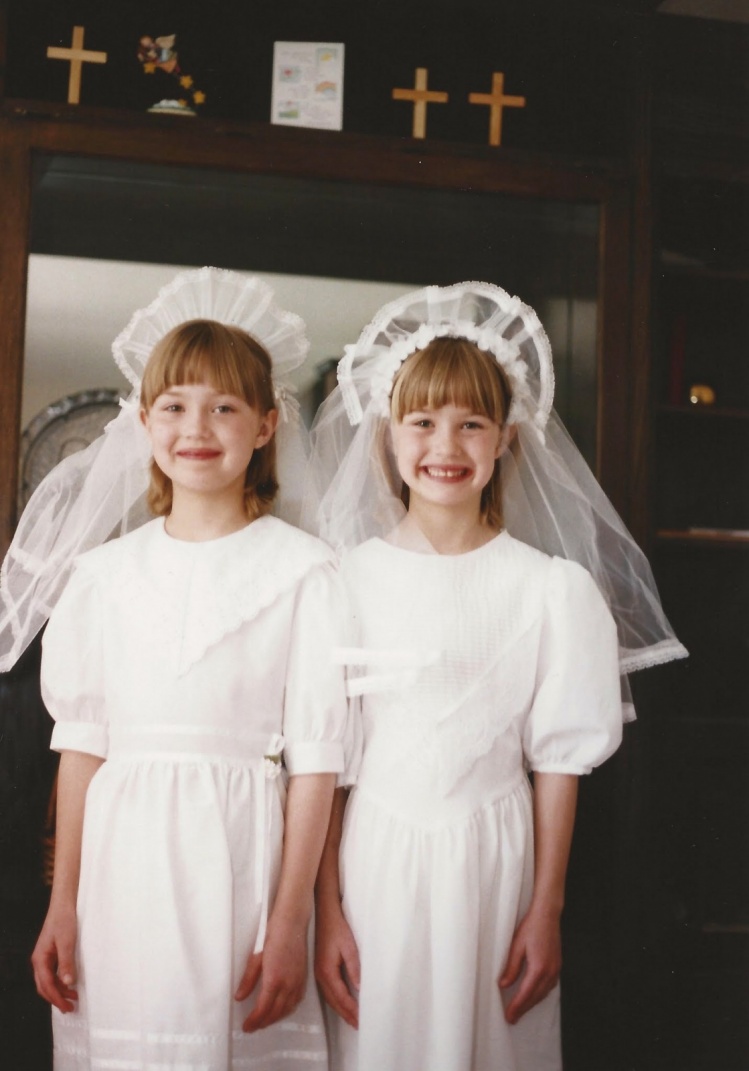 Our first split wasn’t a conscious decision, given the lack of brain development or will power at that early stage in gestation, when a single fertilized egg divided into Emily and me.

I suppose our second real split came at about five and a half years. Twins at my elementary school had to decide before beginning kindergarten whether they always wanted to be in the same class or always in different classes. Though I don’t know precisely why we chose separate classes, I have a strong feeling it had something to do with collectively making the highest possible number of friends.

Whatever the impetus for the split, it worked in our favor early on: instead of all the mind-blowingly awesome toys I could have brought to Ms. Ostlund’s kindergarten for show-and-tell (my battery-operated Power Rangers glove comes immediately to mind), I dedicated my ten minutes in the spotlight to showing off My Identical Twin Sister, Emily.

Maybe it’s obvious given my inclination to show-and-tell her, but Emily and I have always been the best-friends kind of twins. Some twins are competitive; they seem out to prove the egg didn’t split evenly, if you know what I mean. Some are so eager to develop distinct identities that (it seems to me, as an insider) one twin will cultivate habits merely as a reaction against the other’s: I don’t even like tennis, but dammit, I will not be known as “the lacrosse-playing-twins” if my life depends on it. Every once in a while, there are twins who decide not to have separate identities at all: My name is actually pronounced “The Smith Twins”—thanks.

We had heard rumors of this last type of twins: they attended the same college, roomed together, and, upon love and marriage, cohabited a duplex. When their spouses died, they pulled out the ol’ bunk beds—wombmate to roommate to tombmate. Hyperbole aside, my sister and I recognized the ease with which we too could slip into never-being-apart, and decided to address that possibility by deliberately choosing different colleges and finding out what non-twin living was all about.

This was by far our most significant split—not simply a different classroom across the hallway, but different cities, friends, lives.

Our breakup, so to speak, wasn’t hostile: “It’s not you. Well, it’s not me either. It’s the ‘us’ that needs…space,” we said in perfect, twinny unison.

Life without Emily nearby was different in surprising ways. An uncomfortable feeling arose within me when I met and introduced myself to people who didn’t just know I was a twin. Where we grew up, our teachers, classmates, teammates, and friends didn’t have to meet both of us to know about both of us. I suddenly heard myself blurt: “And you should know, I have a twin sister and her name is Emily. That’s important.” To not have her known by people who knew me gave me the sense that my identity was somehow compromised: How could you really know Ellen without at least knowing about Emily?

I persevered through the discomfort of these newfangled “singular introductions” and eventually broke the habit of speaking in the plural (though I admit I still sometimes show unrequested pictures of Emily to new people—it’s compulsive!).

As for the split: it did what it was supposed to. We graduated from separate colleges; I got married and forsook the last name of my original mate, and she moved across the country. We never shared an apartment or took a class together, despite probably preferring each other to all other roommates and classmates.

After six years apart, as we were beginning to think ourselves doomed to a long-distance relationship, we both stumbled into one of the densest cities in the world. Call it divine providence, twin magnetism, or subconscious separation anxiety, but nowadays we’re a thousand miles from home and a mere five miles from each other in New York City.

A few days after I moved here, she insisted I come visit her office to meet her friends and coworkers—which, I learned, is just the grown-up version of inviting me for show-and-tell.

Published in the May 16, 2014 issue:
View Contents
Tags
The Last Word

It's Raining in Minnesota