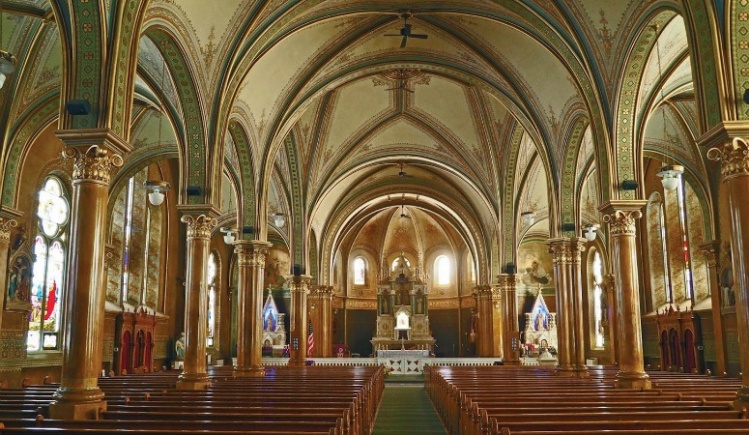 The Western prairie is a Protestant place, mostly. Northern European  immigrants were typically the ones who followed the Homestead Acts to build their hardscrabble farms in the Dakotas, and they found a physical landscape that matched their mystical landscape: empty and windswept, a dry yellow land of little besides God and the self.

Perhaps that’s why the Catholics of Hoven, South Dakota, were so defiant. In a town of no more than 600 people at its peak—406 now, according to the last census—a community of German Catholics decided to make a statement. From 1917 to 1921, they erected St. Anthony of Padua, a towering Romanesque Revival church with pews for 1,200 parishioners. They would defy the white-clapboard architecture that small-town churches used in America. They would defy the Protestant tone of the nation. And they would defy the bleak spirituality of the American prairie.

Most of our experience with beautiful Catholic churches comes from the cities: New York, Chicago, Boston—places where grand Gothic statements of faith and social power are found on nearly every other corner. The cathedral in Sioux Falls, South Dakota’s largest town, is this kind of church: built on the city’s highest hill, it is an aggressive declaration to the Protestant majority that Catholics had arrived and the future belonged to them.

The rural prairies, however, were a less obvious place for Catholic architecture. Most of the early immigrants to the Dakotas were Scandinavian Lutherans. In time, they would build more solid stone and brick churches, the typical low-key Protestant buildings found along the streets of small-town America, but the first churches they built were stripped-down wooden halls for community worship and Bible study.

The first Catholic church in Hoven was like that, too, built after the town was founded in 1883. When a windstorm destroyed Hoven’s wooden buildings in 1917, however, the local priest—a wonderfully forceful and dynamic Bavarian named Anthony Helmbrecht—decided he’d had enough. He rallied his two hundred parish families to build a church that would stand up to the harsh landscape. By the time the church was done in 1921, a ridiculous $500,000 (around $10 million in today’s currency) had been spent constructing a massive building modeled after the Romanesque cathedral in Ruhmannsfelden, Bavaria.

The twin spires rise 140 feet in reddish brick, and the exterior is decorated with stone carvings and 31 enormous stained-glass windows contributed by the German craftsman Fr. Helmbrecht commissioned. Anton Dohmen, an architect from the Bavarian community in Milwaukee, designed the church, and Anton Zwach, a German contractor from Dubuque, came up to South Dakota to build it.

Inside, the ceiling ribs are adorned with floral and geometric shapes, trimmed with regal gold. Chandeliers give the place a soft, cozy glow, despite the wooden pews for 1,200 people. The stained-glass windows show Mary’s ascension, the Flight out of Egypt, and images of St. Joseph. Painted plaster imitates marble in the nave, pointing toward the Romanesque altar and intricate Bavarian tabernacle.

Careful restoration work by the townsfolk in the 1980s helped preserve St. Anthony’s, and the bishop of Sioux Falls has declared it a destination for South Dakota’s pilgrims. But no listing on historical registries will hide the fact that it is a beautiful and very Catholic building in a dying town on an empty prairie.

And yet, in the nearly one hundred years since it was begun, St. Anthony’s has developed a kind of calmness, a gentleness beyond the defiance with which the church was built. It has settled down on the prairie, grown in place, and, in its way, helped catholicize that stark country. Becoming an old church, it no longer speaks only of its German identity in the first years after World War I. And that harsh Dakota prairie no longer seems a place of just God and the self. The Catholic Church is there, too: softening the physical horizon and easing the mystical landscape, with an oversized parish building that has survived all the prairie can throw against it.

Faith Bottum is a student in the Black Hills of South Dakota.