The Right to Be Silent, or Not
By Nathan Schneider
The Last Word 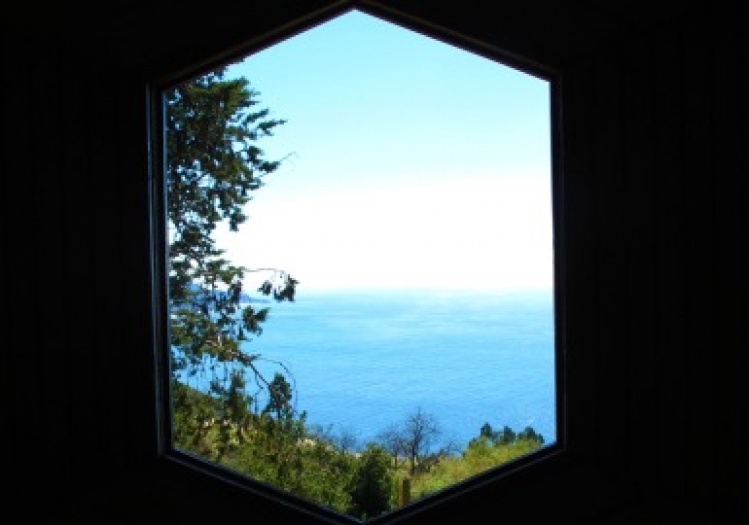 “Sit in your cell as in paradise,” begins St. Romuald’s Brief Rule, an eleventh-century text that guides the life of monks in the Camaldolese order. When you’re two miles up a winding road above the cliffs of Big Sur, with waves crashing inaudibly in the mist below, imagining yourself in paradise isn’t hard.

But I suppose it depends on what you mean by paradise. St. Romuald probably didn’t have in mind a sunny, sandy beach with lobster to eat and piña coladas to drink. The Brief Rule ends by suggesting that one should be “like the chick who tastes nothing and eats nothing but what his mother gives him.” But as I read those words at the New Camaldoli Hermitage, my fiancée and I were technically on vacation.

The first time I visited New Camaldoli, a decade earlier, was for something closer to a traditional pilgrimage. I found the hermitage during a month-long solo drive across the country. I was eighteen years old and had been baptized and confirmed only a few months earlier after a frenzied conversion, which had begun at another monastery, Holy Cross Abbey in Virginia. I set out on my cross-country journey in order to reflect on this whole experience.

When I saw a sign indicating that there were monks along that spectacular stretch of Highway 1, I had to investigate. Driving up the mountain to the hermitage meant driving through the clouds: a soft gray canopy separated the ocean below from the monastery. I stayed long enough to hear the monks in white robes chant vespers in the church, and to mutter a few prayers of my own. The place gave me the impression of being the heavenly, capitalized kind of Paradise.

When I returned to New Camaldoli in a rental car with my fiancée Claire, it was a warm California winter. The sky was clear and bright. Weeks ahead of time, I’d made a reservation for us to share a room with two single beds. The suggested donation was a little more expensive than some of the nearby hotels, though a lot less than others. I made the mistake of trying to haggle with a monk on the phone, until he reminded me that I could pay whatever I wanted.

We arrived after dark. Waiting for us in our room was a brochure. “We ask you to maintain silence in your room, the kitchen, and the area around the retreat house,” it said. “If you want to have a conversation with someone, please go for a walk down the drive with them.”

Normally, permission to be silent makes arriving at a monastery such a welcome relief for me. But would it still be vacation for us if we couldn’t talk? Every whisper was against the rules—oh well, we whispered. And, the next day, we took a walk down the drive and talked against the backdrop of the ocean’s horizon, which traced the curvature of Earth. Along the way, we tried to identify the dry bushes by their fragrance. Afterward there was a prepared lunch in the guest-house kitchen: cabbage and onions cooked in vinegar, lightly blackened brussels sprouts, pasta (gluten and gluten-free) in a not-too-creamy spinach and mushroom sauce.

The visit wasn’t entirely an epicurean experience. That morning we woke up for the 5:30 a.m. vigil service in the chapel. Later, we went to Mass, standing with the monks around the sunlit altar. It’s mainly this kind of experience that, in the past, I’ve associated with visits to monasteries—forcing oneself out of bed too early, keeping awake during prayers, persevering through boredom. Ever since I first arrived at Holy Cross Abbey, the allure of monasteries has been their rigor. I have a lot to learn about the paradise part.

Two winters ago, I spent a few days at Gethsemani Abbey in Kentucky with Claire and her family. Again, that question: Would we be silent at meals, or would we whisper? Would we hide in our cells or go off on chatty walks in the woods? Both/and, it turned out. On New Year’s Eve, some of us stole away for the striking of midnight. Claire’s sister and brother-in-law brought a bottle of bourbon from a nearby distillery. Claire’s mother came along, too. We sat in the cold, under the stars, around a pious statue at the top of a hill in front of the abbey, sipping the warming liquor. We talked, trying but failing to keep our voices down. Silence is holy to me, but that was holy, too.