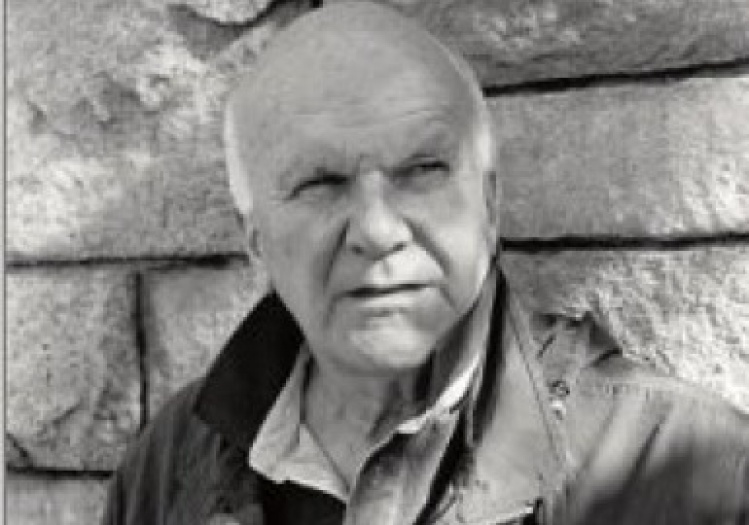 I met Ned O’Gorman the old-fashioned way. During the first days of 2008 I moved to the gray slush of Brooklyn after quitting graduate school in California. I had a few friends in New York, but that was about the extent of my prospects. One friend arrived with me in spirit; despite being confined to the Trappist monastery in Virginia where he was a monk, Brother Benedict sent me a curated selection of the Rolodex from his comparatively libertine days in Greenwich Village. Of the handful of contacts he’d chosen, Ned, who died earlier this month at eighty-four, was the one who would show me how to make the city a home.

“You’ll find I’ve filled up your e-in-box with O’Gormaniana,” Benedict wrote. So he did: a Wikipedia page, a link to the index of the Ned O’Gorman Papers at Georgetown, articles from the Rhetoric Society Quarterly, a profile at Poets.org. But there was no email address for Ned himself, only a phone number. I called it. After a couple of tries a gruff voice answered and invited me over for tea.

The New York Times obituary characterized his apartment near Lincoln Center as “relative luxury”; perhaps its location was, but inside the place was notable only in its drabness and sparseness. The living room had just a few places to sit; the study alongside had a mat in the corner on which Ned slept. There was no sign of a computer.

Ned stood tall over me, with a loose turtleneck sweater and a bald head, but he seemed inhibited, as if anxious about wielding the force of his body and personality. He’d grown up rich and lonely, and as soon as he could he fled to the voluntary poverty of the Catholic Worker and Dorothy Day, to the philosopher-priest Ivan Illich—authors whose books I’d been discreetly carrying all through college. Since 1967 he’d taught young children in Harlem. Every summer he went to Venice.

We talked about writing (he from experience, I from aspiration), and about the two Sunday services he was then in the habit of attending (Catholic in the city, Protestant upstate). He asked about the condition of my faith. I think he was then, as he perpetually seemed to be, trying to write an essay on sexuality that he intended for Commonweal. He gave me a copy of his memoir, The Other Side of Loneliness, and a book of his poetry. In the memoir he tucked a postcard from the Gallerie dell’Accademia with Giorgione’s Castelfranco Madonna on one side and, on the other, a 98th Street address written in blue pen. At the top it said, “Jesuits.”

I arrived at the specified apartment a few days later for a Mass and supper. It was a room of radicals—Fr. Dan Berrigan, Sr. Anne Montgomery, other heroes less well known. This community of elders and peers soon became my own community, and their faith has propped up my own in times when nothing else could. That night I also met another young writer who’d eventually become my roommate; we founded a website together that we turned into our job. Ned probably never even saw it.

At these monthly feasts, as we called them, I learned more about Ned’s life of coping—through community, through place, through verse, through secrets, and through faith. Also, through anger. During the collective homilies he would often rage over the latest expressions of intolerance from the mouthpieces representing the church he loved. His own feelings of exclusion were never far from the surface. Long before I knew him he had a secret family with a man referred to in the memoir as X, who eventually couldn’t take the hiding anymore and left. They had adopted a son, Ricardo, whom Ned once took on an unsuccessful search to find his biological father in Jamaica. Later, after Ricardo’s long fight with AIDS, Ned scattered his ashes at the Vatican.

He never tired of telling me this story: Many decades back, upon arriving at the apartment of the lawyer-theologian William Stringfellow and the poet Anthony Towne, Stringfellow said to Ned, “You can put your coat on our bed.”

“‘Our bed?’ I remembered thinking. ‘What do you mean, our bed?’ I was astonished.”

The ease with which Stringfellow could carry his intimacy with another man never seemed to be within Ned’s grasp. Not then or ever. “Perhaps in God’s compassion,” he wrote, “there will be a time when the great articulation of homosexual love will seem as sweetly commonplace as the air we breathe.”

About a year ago I spent an afternoon at the 42nd Street branch of the New York Public Library looking through microfilm archives of Jubilee magazine, of which Ned had been literary editor. Its pages of probing essays, of spectacular photography, of upbeat advertisements for vocational opportunities, were the image of a Catholicism I’ve long longed for but have experienced only in glimpses—joyful, sophisticated, relentlessly curious, unafraid. I studied too his dispatch in those pages from the front lines of the civil rights movement. At the next feast, and for months afterward, Ned and I fantasized about bringing Jubilee back somehow; I even set up a Twitter account for it. Ned seemed to love these conversations, and he filled them with secrets of what had made Jubilee’s original incarnation so incandescent. In the right mood, revelry came easily to him. “Nathan,” he said, to make sure I understood, “it has to be full of faith!” Otherwise there’d be no point.

There is a peculiar quality to these kinds of relationships, between an older person who is used to his reputation preceding him and a younger one who is almost completely ignorant of it. I could read Ned’s memoir, but it is full of knowing references to people I didn’t know. I didn’t even know what questions I should be asking.

When my partner Claire first met Ned, she discovered things I hadn’t. She tracked down a ragged old copy of Prophetic Voices: Ideas and Words on Revolution, which he’d edited in the late 1960s. It featured work from a youthful Peter Steinfels and the pre-neoconservative Michael Novak, as well as some near-death thoughts of Thomas Merton (who’d once rejected Ned from the novitiate at Gethsemani). At the time I was writing a book of my own about revolution, but I had never heard the older Ned say anything close to anything on the subject, so I never bothered to bring it up.

I kept meaning to see him teach. The board of the first school he founded in Harlem fired him for refusing to cooperate with their plans to modernize. I once attended a lunch of the board of the second school in his living room; it included a famous singer and a novelist whom I’ve since visited in three countries. Ned made no claim to ensure outcomes or rescue, not to me anyway. Some of his students went to college, but he also watched as generation after generation of them succumbed to misery in a society where they had no place. His ministry was merely to allow them a childhood.

That Ned’s death took me by surprise was partly a matter of the half-century between us. One of the Jesuits he had introduced me to years earlier told me Ned was ill. I tried calling a few times to arrange a visit but never got through. I guess I’ve become used to news, even of something like the status of a friend’s pancreatic cancer, arriving via my Facebook feed, but in this case, nothing. It’s a precious duty to accompany the dying; with Ned I missed my chance. On March 7, an email arrived: “Ned finally went to God this morning after a long holdout.”

The first thing to come into my head was the refrain of Ned’s about Jubilee, spoken in his generous, domineering baritone—“Nathan, it has to be full of faith!” And then, after that, a silence: the questions I never knew to ask him.